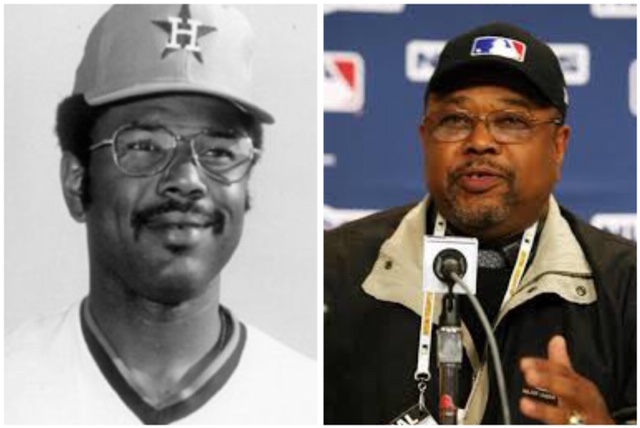 HOUSTON — Bob “The Bull” Watson, the first African-American GM to win a World Series, died Thursday due to kidney disease. He was 74. His legacy was honored in March with the dedication of the Bob Watson Education Center at the Astros Youth Academy in Acres Home.

“This is a very sad day for the Astros and for all of baseball. He was an All-Star on the field and a true pioneer off of it, admired and respected by everyone he played with or worked alongside,” the Astros released in a statement. “Bob will be missed, but not forgotten. We send our heartfelt condolences to his wife, Carol, his daughter Kelley, his son, Keith and to the rest of his family, friends and many admirers.”

The Astros provided background on Watson’s impressive history in baseball, which reached success at many different levels, including as a player, coach, general manager and MLB executive.

After being signed by Houston as a 19-year-old free agent in 1965, Watson made his Major League debut with the Astros in 1966, and would go on to become one of the finest players in franchise history. During his long career in Houston, which would span parts of 14 seasons (1966-79), Watson, nicknamed The Bull, was a two-time All-Star (1973, ‘75), hitting over .300 four times and reaching 100 RBI in a season twice while hitting in the middle of the Astros lineup in the pitcher-friendly Astrodome. His .299 batting average in the 1970’s was 10th-best among all NL hitters (5th among right-handed hitters). He also holds the distinction of scoring MLB’s one millionth run, accomplishing this feat on May 4, 1975 vs. the Giants at Candlestick Park. Watson still ranks in the top 10 on the Astros all-time lists in most major offensive categories, including batting average (.297, T-2nd), hits (1,448, 6th), home runs (139, 7th), RBI (719, 5th) and on-base-pct. (.364, 4th). In January of 2020, Watson was elected to the Houston Astros Hall of Fame as part of the second Class ever.

Later in his career, Watson would make history again, becoming the first player in Major League history to hit for the cycle in both leagues, turning the trick for Boston on Sept. 15, 1979 at Baltimore. While with the New York Yankees, he would prove to be a clutch playoff performer, hitting a combined .371 (23×62) in 17 postseason games with a .968 OPS.

After retiring as a player in 1984 after 19 seasons in the Majors, Watson would become a hitting coach, most notably for the 1988 AL Champion Oakland A’s. Following the 1988 season, he was hired by the Astros as assistant general manager and later took over as the club’s general manager following the 1993 season, becoming just the second African-American to hold this position in MLB history. Watson would later become the first African-American GM to win a World Series after helping to guide the New York Yankees to the title in 1996. Watson was instrumental in hiring Joe Torre as Yankees manager prior to the ‘96 season. Torre would go on to win four World Series for the Yankees en route to a Hall of Fame career.

Watson also served on the Baseball Assistance Team (B.A.T.) Board of Directors for several years, playing a vital role as a member of Grant Committee. B.A.T is a non-profit organization supported by MLB and all 30 Clubs designed to confidentially help members of the baseball family in need of assistance. When Watson was honored with the B.A.T. Lifetime Achievement Award at Minute Maid Park in 2017, MLB Commissioner Rob Manfred and Torre traveled to Houston to take part in the ceremony.

Watson would later serve as MLB’s Vice President of Rules and On-Field Operations for several years. He also had a successful stint working for USA Baseball as Chairman of the Selection Committee and General Manager of Professional Baseball Operations, in which he was responsible for the selection of professional coaching staffs and players.

In March of 2020, the Astros hosted a special ceremony dedicating the new Bob Watson Education Center, which is located at the Astros Youth Academy in Houston’s Acres Home. Watson took part in the ceremony, and was joined by Astros Owner and Chairman Jim Crane, Torre, Houston Mayor Pro Tem Dave Martin, Astros Executive Advisor Reid Ryan, former Astros teammate Craig Reynolds, Astros Foundation Executive Director Twila Carter, and Director of the AYA Daryl Wade. Watson’s wife Carol, daughter Kelley and son Keith also were in attendance and spoke at the event. Former Astros broadcaster Bill Brown served as the MC. In recent years, before being slowed by health issues, Watson was a frequent visitor to the Astros Youth Academy, speaking to the young children and teens who utilize the facility.

The Bob Watson Education Center (BWEC) will provide a more comprehensive approach to building great leaders in the community. The BWEC was constructed on the site of the Astros Youth Academy, which serves over 10,000 youths (ages 7-17) annually through youth baseball, softball and educational activities. Through educational tutoring, college readiness and character building programs, the BWEC will provide a climate–controlled classroom environment for year-round youth and family activities.