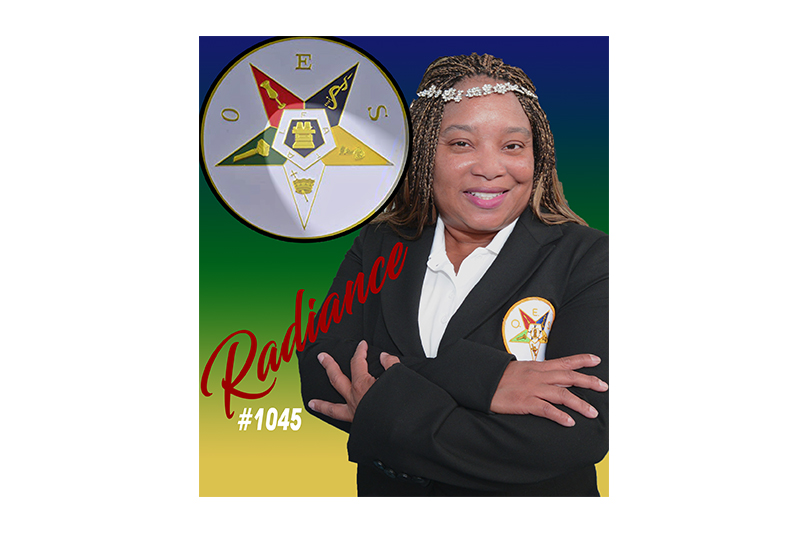 HOUSTON – “If a brother or sister is poorly clothed and lacking in daily food, and one of you says to them, “Go in peace, be warmed and filled, without giving them the things needed for the body, what good is that? So also faith by itself, if it does not have works, is dead.” – James 2:15-17 ESV

This scriptural reference is the basis upon which the Order of the Eastern Star Radiance Chapter #1045 was established. The local chapter is consistent of dedicated women and men who sincerely reflect the spirit of fraternal love and desire to work together serving mankind unselfishly in the community.

Mrs. Tiawona Osborne-Davis is the Worthy Matron of this particular Chapter within the Order of the Eastern Stars. Since as far back as she could remember, she was always fascinated at the sight of an Eastern Star. As a child, she vividly recalls her great grandmother dressed in white and always thought that she was a nurse. After the passing of her great grandmother, the family found her Eastern Star attire and Davis was all the more intrigued. As time progressed, she begins researching the Order of the Eastern Star to see if it was something that would suite her.

In doing so, she found she loved the concept of helping others and building a “true Sisterhood”. Over a year ago, Davis was inducted into the organization. From starting out as a Chaplain, she was promoted to Worthy Matron within five months. She was sent to an inactive chapter and immediately began reviving Radiance Chapter #1045.

Since that time, Radiance has been heavily active and involved throughout the community. During a recent interview, Davis said, “We like to go out and serve the community… We like to go in places that other people are not willing to go – whether we’re feeding the homeless under the bridge or doing caps and gowns for seniors; we just like to make a difference in the community.”

In the month of April, Radiance hosted the Bumblebee Community Baby Shower in Acreage Home at the Lincoln Park Community Center located at 979 Grenshaw. The shower was open to the public and the Eastern Stars along with their partners, distributed a wide range of items from diapers to clothing to food and baby furniture for those in the community. Having experienced the perils associated with teen pregnancy, the community shower was a special project for Davis. “I understand being a teen mom and definitely know that there is a need within the community,” she added.

This week on May 18, Radiance is hosting a fundraiser in Midtown from 2-4pm, to raise funds for their Annual Back to School Bash. The Back to School Bash is an effort to supply students with tennis shoes, school supplies and other necessities. The Worthy Matron believes, it is important to assist disadvantaged youth, so that they can go to school comfortably and not have to deal with the pressure of being judged for not having the same as other students.

Davis also shared another project Radiance initiated last year, funding caps and gowns for local graduating seniors. She said, “When we started with the caps and gowns, we realized a lot of people hadn’t recovered from Hurricane Harvey. After doing research, we found that the school district requires seniors to purchase caps and gowns from a specific company. The prices start at $51, and if you don’t have it, you can’t participate in the commencement ceremony. So, we thought that was unfair and instead of supplying for the seven targeted seniors we intended, we were able to supply 20 seniors.”

Davis sincerely expresses her gratitude for their partners the: Houston Diaper Bank, Aldine Independent School District, Reflective Gratitude, Nurse-Family Partnership and Baylor Teen Health Clinic. Most importantly, she commends each member of the Order of the Eastern Stars with a special emphasis on Radiance Chapter #1045. She says, “All of our funding comes from the members and most of them are social workers and professionals who work a regular 9 to 5; but they all have a heart and passion to give back.”

About the Worthy Matron

Tiawona Osborne-Davis is a native Houstonian, who was raised in the Acreage Home community. During her youth, she encountered a series of obstacles in which she victoriously triumphed. Due to becoming a teen parent, she experienced a bout with homelessness and took a leave from school. However, with a strong determination to succeed she returned to school to complete her studies.

Afterwards, she earned an Associate’s degree in Early Childhood Education from Lone Star- North Harris. Shortly thereafter, she matriculated at Sam Houston University where she achieved a Bachelor’s degree in Psychology. Davis went on to obtain a Master’s degree in Counseling from Prairie View A&M University. Most recently, she passed her certification to become a Texas Guardian.

Today, Davis is happily married to her high school sweetheart, Byron Davis, Sr. who is a Mason. Together they are the parents of three children, Quea’Hanna, Shanice and Byron, II Davis. Davis is proud of both of her daughters who are shadowing her footsteps in the Order of the Eastern Star Radiance Chapter #1045. The Davis family are members of the Fellowship of the Woodlands.

A Word of Encouragement

“We are here to show love and help one another, you may not be where you want to be but know you are not in this alone.” – Tiawona Davis

OES Historical Background: What is the Order of the Eastern Star?

According to the organization’s history, “The Order of the Eastern Star is a Masonic-related fraternity of women and men dedicated to charity, truth and loving kindness.” It was established as a benevolent and charitable order, which demonstrates love through actions. Men and women under its auspice raise funds annually around the world for projects that benefit all humanity.

– The Order of the Eastern Star teaches fidelity, constancy, loyalty, faith and love. The lessons of the Order are spiritual and teach a deep love for God, country and family.

– The Order of the Eastern Star was conceived, written and taught by a Master Mason to provide a place where both men and women could work and serve side by side. It is now the largest Fraternal organization in the world to which both men and women belong.

– The Eastern Star is also a social organization with frequent formal events and community outreach. The membership is admonished to aid, comfort and protect each other by sharing the joys and sorrows of life. The rewards are many, as members work and play together in love and charity and become life-long friends, sisters and brothers.

Members of OES represent a diverse array of backgrounds from business, civil and religious leaders to scientists, philosophers, authors, musicians, artisans and other affiliations. Collectively, these members unite together in the pursuit of More Light. The Order of the Eastern Star does not discriminate on the basis of race, color, gender or religious beliefs. Selected members are of high moral and spiritual quality, who have a desire to work together in harmony, perform the Order’s objectives, and serve mankind generously and unselfishly.

To express an interest in OES Radiance #1045, visit their website at http://oesradiance.weebly.com or contact them on Facebook @ Radiance Chapter. To donate to the OES Radiance cause contact, Radiance1045@yahoo.com or by mail at 1411 Wunsche Loop#334 Spring, 77373.

At the present, Radiance is preparing for Hope Beyond Bridges – The Church Project. Members will be cooking and serving the homeless population of Houston on June 15, from 9:00 – 11:00am at 5201 Spring Cypress Rd., Spring, Tx 77379.