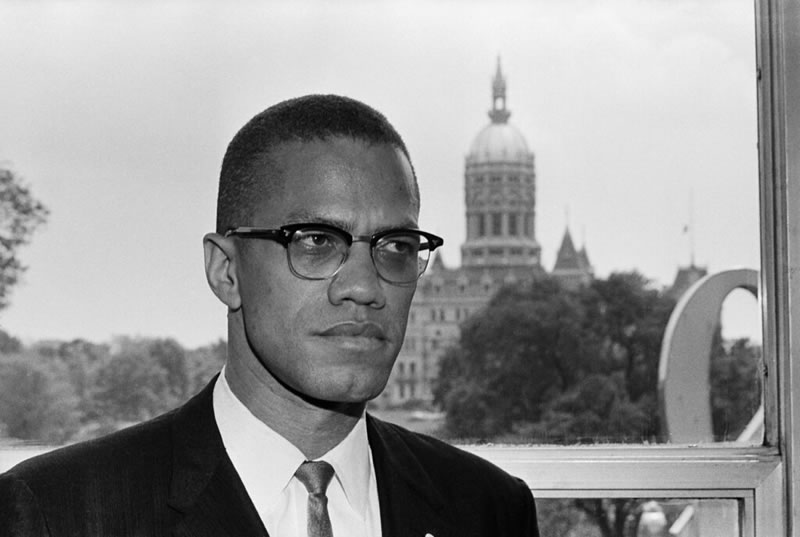 “A race of people is like an individual man; until it uses its own talent, takes pride in its own history, expresses its own culture, affirms its own selfhood, it can never fulfill itself.”
— Malcolm X

Although his premature death occurred decades ago, his influence remains strong and is one of the greatest freedom fighters of our time.

“It is our responsibility to define for ourselves who and what is important in our history,” said Kofi Taharka, National Chairman of the National Black United Front in Houston. “Minister Malcolm X is very important. Happy birthday ancestor!”

The impact of his words of hope and deeds are still evident decades later as Black America still works through and strives to overcome 400 years of slavery and 149 years of discrimination, segregation and the spirit of racism that continues to churn in the hearts of some in White America who continue to pass the poison cup from generation to generation.

His life was an example to all in overcoming adversity and his words serve as a continuing rally cry in the fight for freedom and justice for Black America.

“While the American spin doctors have been largely successful in shaping a narrative of Dr. Martin Luther King into a two second sound bite of “I have a dream”, they have been less victorious in painting Malcolm into the corner of “By any means necessary,” Taharka said. “The image makers of society are more than happy to dismiss Malcolm X and leave him in the dusk bin of history as irrelevant.”

Taharka said both were real human beings, with strengths and shortcomings.  They were not angelic figures without faults. They were sons, husbands, fathers etc. just like many of us.  They both were apart of organizations,  Martin (Southern Christian Leadership Conference), Malcolm (Nation of Islam, later Organization for Afro-American Unity & Muslim Mosque Inc.).  These men didn’t not operate as lone superstars, rather were key figures in their respective organizations and a larger movement with many formations.

The two iconic martyrs of the 1960’s era are still dangerous to the status-quo today in 2014, if properly researched and understood, he added.

“Minister Malcolm X stood at the crossroads in many ways for great contributing groups to the African/Black community in America and around the world,” Taharka said. “Looking backward and forward in his life we will find him intersecting and influencing formations including: Universal Negro Improvement Association, Nation of Islam, Student Non-Violent Coordinating Committee, Black Panther Party, Revolutionary Action Movement, Republic of New Africa, African Independence Movements/Countries, Civil Rights and Black Power formations of all stripes.  His analysis and communication skills are worthy of our attention today.”

His life and contributions are notable and worthy of mention and sharing with every African-American youth living in America today.

According to the Estate of Malcolm X biography, he was born Malcolm Little on May 19, 1925 in Omaha, Nebraska.

His mother, Louise Norton Little, was a homemaker occupied with the family’s eight children. His father, Earl Little, was an outspoken Baptist minister and avid supporter of Black Nationalist leader Marcus Garvey. Earl’s civil rights activism prompted death threats from the white supremacist organization Black Legion, forcing the family to relocate twice before Malcolm’s fourth birthday.
Regardless of the Little’s efforts to elude the Legion, in 1929, their Lansing, Michigan home was burned to the ground. Two years later, Earl’s body was found lying across the town’s trolley tracks. Police ruled both incidents as accidents, but the Littles were certain that members of the Black Legion were responsible. Louise suffered emotional breakdown several years after the death of her husband and was committed to a mental institution, while her children were split up among various foster homes and orphanages.
Eventually, Malcolm and his long-time friend, Malcolm “Shorty” Jarvis, moved back to Boston. In 1946, they were arrested and convicted on burglary charges, and Malcolm was sentenced to 10 years in prison, although he was granted parol after serving seven years.

Recalling his days in school, he used the time to further his education. It was during this period of self-enlightenment that Malcolm’s brother Reginald would visit and discuss his recent conversion to the Muslim religion. Reginald belonged to the religious organization the Nation of Islam (NOI).
Intrigued, Malcolm began to study the teachings of NOI leader Elijah Muhammad. Muhammad taught that white society actively worked to keep African-Americans from empowering themselves and achieving political, economic, and social success. Among other goals, the NOI fought for a state of their own, separate from one inhabited by white people. By the time he was paroled in 1952, Malcolm was a devoted follower with the new surname “X” (He considered “Little” a slave name and chose the “X” to signify his lost tribal name.).
Intelligent and articulate, Malcolm was appointed as a minister and national spokesman for the Nation of Islam. Elijah Muhammad also charged him with establishing new mosques in cities such as Detroit, Michigan, and Harlem. Malcolm utilized newspaper columns, as well as radio and television, to communicate the NOI’s message across the United States. His charisma, drive, and conviction attracted an astounding number of new members. Malcolm was largely credited with increasing membership in the NOI from 500 in 1952 to 30,000 in 1963.
The crowds and controversy surrounding Malcolm made him a media magnet. He was featured in a weeklong television special with Mike Wallace in 1959, called The Hate That Hate Produced. The program explored the fundamentals of the NOI, and tracked Malcolm’s emergence as one of its most important leaders. After the special, Malcolm was faced with the uncomfortable reality that his fame had eclipsed that of his mentor Elijah Muhammad. In addition to the media, Malcolm’s vivid personality had captured the government’s attention. As membership in the NOI continued to grow, FBI agents infiltrated the organization (one even acted as Malcolm’s bodyguard) and secretly placed bugs, wiretaps, cameras, and other surveillance equipment to monitor the group’s activities.

Malcolm’s faith was dealt a crushing blow at the height of the civil rights movement in 1963. He learned that his mentor and leader, Elijah Muhammad, was secretly having relations with as many as six women within the Nation of Islam organization. As if that were not enough, Malcolm found out that some of these relationships had resulted in children.
Since joining the NOI, Malcolm had strictly adhered to the teachings of Muhammad, which included remaining celibate until his marriage to Betty Shabazz in 1958. Malcolm refused Muhammad’s request to help cover up the affairs and subsequent children. He was deeply hurt by Muhammad’s actions, because he had previously considered him a living prophet. Malcolm also felt guilty about the masses he had led to join the NOI, which he now felt was a fraudulent organization built on too many lies to ignore.
Shortly after his shocking discovery, Malcolm received criticism for a comment he made regarding the assassination of President John F. Kennedy. “[Kennedy] never foresaw that the chickens would come home to roost so soon,” said Malcolm. After the statement, Elijah Muhammad “silenced” Malcolm for 90 days. Malcolm, however, suspected he was silenced for another reason. In March 1964, Malcolm terminated his relationship with the NOI. Unable to look past Muhammad’s deception, Malcolm decided to found his own religious organization, the Muslim Mosque, Inc.
That same year, Malcolm went on a pilgrimage to Mecca, which proved to be life altering for him. For the first time, Malcolm shared his thoughts and beliefs with different cultures and found the response to be overwhelmingly positive. When he returned, Malcolm said he had met “blonde-haired, blued-eyed men I could call my brothers.” He returned to the United States with a new outlook on integration and a new hope for the future. This time when Malcolm spoke, instead of just preaching to African-Americans, he had a message for all races.
After Malcolm resigned his position in the Nation of Islam and renounced Elijah Muhammad, relations between the two had become increasingly volatile. FBI informants working undercover in the NOI warned officials that Malcolm had been marked for assassination–one undercover officer had even been ordered to help plant a bomb in Malcolm’s car.
After repeated attempts on his life, Malcolm rarely traveled anywhere without bodyguards. On February 14, 1965 the home where Malcolm, Betty, and their four daughters lived in East Elmhurst, New York was firebombed. Luckily, the family escaped physical injury.
One week later, however, Malcolm’s enemies were successful in their ruthless attempt. At a speaking engagement in the Manhattan’s Audubon Ballroom on February 21, 1965, three gunmen rushed Malcolm onstage. They shot him 15 times at close range. The 39-year-old was pronounced dead on arrival at New York’s Columbia Presbyterian Hospital.
A total of 1,500 people attended Malcolm’s funeral in Harlem on February 27, 1965 at the Faith Temple Church of God in Christ (now Child’s Memorial Temple Church of God in Christ). After the ceremony, friends took the shovels away from the waiting gravediggers and buried Malcolm themselves.
Later that year, Betty gave birth to their twin daughters.
Malcolm’s assassins, Talmadge Hayer, Norman 3X Butler, and Thomas 15X Johnson, were convicted of first-degree murder in March 1966. The three men were all members of the Nation of Islam. Malcolm X’s legacy has moved through generations as the subject of numerous documentaries, books, and movies.

The Autobiography of Malcolm X by Alex Haley, his speeches “Message to the Grassroots” and “The Ballot or the Bullet” are good starting points for studying the great freedom fighter, Taharka said.
Malcolm X is buried at the Ferncliff Cemetery in Hartsdale, New York.