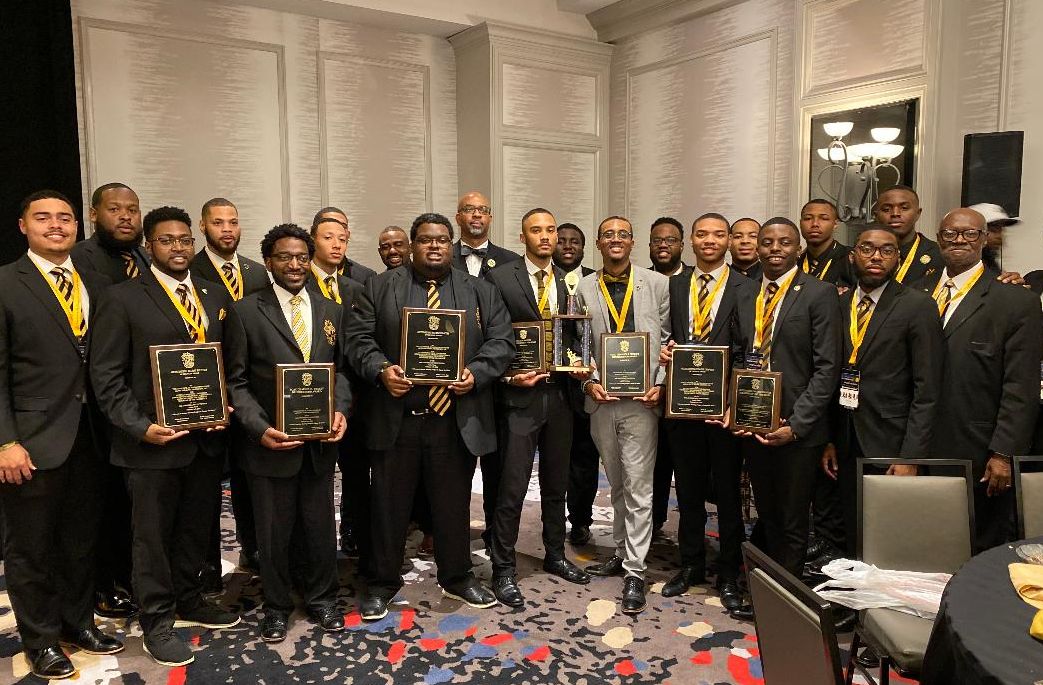 PRAIRIE VIEW, Texas – February 6-8 was a great period for the members of Alpha Phi Alpha Fraternity, Inc., Eta Gamma Chapter at Prairie View A&M University and Epsilon Tau Lambda Chapter in Prairie View at the 2020 Texas Council of Alpha Chapters annual convention. The event was held in Austin, Texas at the Austin Double Tree by Hilton.

The members participated in the proceedings, attended the various workshops and concluded the conference in a virtual sweep at the closing banquet and awards program. The Eta Gamma Chapter won the coveted College Chapter of the Year Award, Chapter with Highest GPA and Scrap Book Award. Since 1970, the chapter has won this award some twenty-eight times. Other winners include the Eta Gamma Debate team with Russell Thomas and Malcolm Wiseman receiving the Hobart Jarrett Debate Award, Malcolm also won the Highest GPA (4.0) award. The Miss Black and Gold Contestants – Z’Nae Mangum (Eta Gamma) was named to the top 5 and Melanie Hollis (Epsilon Tau Lambda) was named to the top 9.

Epsilon Tau Lambda won the coveted Alumni Chapter of the Year Award. The Charles H. Wesley Award for alumni and college relations went to Eta Gamma and Epsilon Tau Lambda Chapters for its cooperative programs and advisory. Additionally, both chapters were represented in the Miss Black and Gold Scholarship Pageant Competition, namely Z’nae Mangum (Eta Gamma) with the Top 5 Award and Melanie Hollis (Epsilon Tau Lambda). The Alumni Brother of the Year Award was a repeat for Frederick V. Roberts for his service to the fraternity and community at large.

The chapters and the brothers will represent the TCAC District at the Alpha Phi Alpha Fraternity’s Southwest Regional Convention in Shreveport, Louisiana in March.

Alpha Phi Alpha Fraternity is the first fraternity for Black college men was founded on December 4, 1906 at Cornell University in Ithaca, New York. The chapters’ win was based on their participation in the organization’s national programs and special Initiatives, to include support for Project Alpha (male mentoring), A Voteless People is a Hopeless People (voter education), Go to High School, Go to College, Brother’s Keeper (service for widows/senior Alphas), Boy Scouts of America, Big Brothers/Big Sisters, Miss Black and Gold Competition and the March of Dimes at the university and the in the community at large.