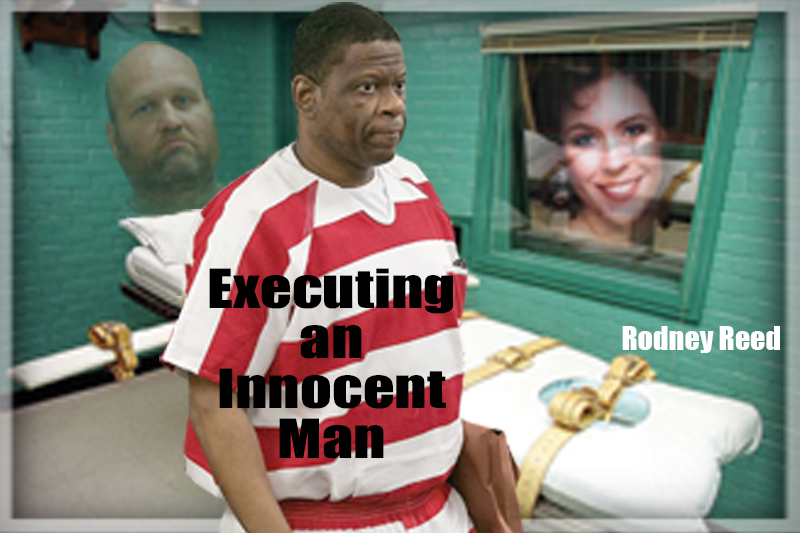 HOUSTON – Rodney Reed is scheduled to be executed on November 20. Reed, who was convicted for the rape and murder of Stacey Stites in Bastrop, Texas in 1998 has maintained his innocence since his arrest.

Reed has been on death row for the past 21 years, but there is substantial evidence that exonerates Reed and points to Ms. Stites’s fiancé, former police officer, Jimmy Fennell.

Rodney Reed is a Black man and Stacey Stites was a White woman. Reed has claimed that he and Stites were involved in a sexual relationship at the time of the murder. Now, new witnesses which include Stites’s cousin and a co-worker, corroborate Reed’s claim that the two were romantically involved.

In a taped interview, the co-worker reveals how Stites told her that she was having sex with a Black man named Rodney and that she was afraid what Fennell, her fiancé would do if he found out.

Jimmy Fennell was originally a prime suspect in the case, and despite his conflicting statements about where he was at the time of the murder, he was ultimately shielded from prosecution for Stites’s murder.

But, according to Reed’s attorneys, former Bastrop County Sheriff’s Officer Wayne Fletcher, has come forward with evidence that Fennell’s motive for killing Stites was that he had discovered that Stites was “fucking a ni%&$#”.

At the trial, the prosecution’s case relied on a time of death between 3:00 a.m. and 5:00 a.m. on April 23, 1996. According to the prosecutor, Reed intercepted Stites on her way to work, gained entry to the truck she was driving where he sexually assaulted her and strangled her to death.

This apparent random attack resulted in no fingerprints, hair or other evidence connecting Reed to the truck even though he supposedly drove the truck to a remote location after the crime. The state buffered their position with testimony from experts stating that the sperm found on the decedent was left from a sexual assault contemporaneous to the murder.

Since Reed’s conviction, nationally-recognized forensic pathologists have all concluded that Reed’s guilt is medically and scientifically impossible, yet the State of Texas has repeatedly denied DNA testing of the murder weapon, a belt that was found at the scene of the crime. These forensics pathologists place the time of the murder before midnight, when, according to Fennell, he and Stites were home alone together. The experts also report that the evidence supports Reed’s claim that he and Stites had sex in the early morning hours on April 22, 1996. Their report shows that the prosecutor’s reliance that sperm can remain intact at most 26 hours after sex is contrary to all credible science and that in fact, sperm can remain intact for at least 72 hours. The experts’ reviews of the sperm taken from Stites would have been far more numerous if intercourse was contemporaneous with her death.

The former Travis County Medical Examiner who testified at Reed’s trial has since recanted his testimony and changed his opinion. In a sworn statement, Dr. Roberto Bayardo states that his finding “very few” sperm indicated that Mr. Reed and Ms. Stites had sex “not less than 24 hours before her death” was wrong. Crime Lab Director Brady Mills has also acknowledged in a written statement that the data and scientific literature supports the 72-hour time frame and not the contemporaneous timeline testified to at trial. A retraction was also filed by LabCorp Technical Leader Stephanie Sivak who admits that the trial testimony was in error.

Additional forensic evidence disputes Reed’s guilt. In a letter Reed’s lawyers wrote to Governor Greg Abbott, they reveal that according to renowned forensic pathologist Michael Baden, M.D., the state’s theory of Reed’s guilt [i]s both “medically and scientifically impossible.” Dr. Baden noted that postmortem changes in Stites’s body—including the manner in which blood settled in her face, neck and shoulder—indicate that her body was lying face down for at least 4-6 hours before it was laid face up on the side of an unpaved road. Further, post-mortem purge fluid was discovered in the truck. This fluid takes hours to develop in a body, indicating that Ms. Stites was dead for hours prior to being transported in Fennell’s truck. Forensic pathologists Werner Spitz, M.D, and Leroy Riddick, M.D. have confirmed this analysis. Even though Dr. Baden testified to these opinions at a 2017 habeas hearing, and the State has never contradicted these experts, Reed remains on death row.

Reed’s lawyers believe that Fennell’s statements and actions near and after Stites’s murder implicate him and they look to a number of facts that support their theory:

• Fennell gave contradictory statements of his whereabouts at the time of Stites’s murder; contradictions he refused to explain, instead exercising his fifth amendment right against self-incrimination

• Police officer Mary Blackwell testified in 2006, that she heard Fennell brag that he would strangle his girlfriend with a belt if he ever found out she was unfaithful. Stites was strangled to death with a belt.

• Blackwell also testified that she had witnessed Fennell acting abusively toward Stites.

• Reed’s two lie detector tests showed that he was deceptive on questions about Stites’s death.

• Fennell had a long history of documented racial animus and sexual misconduct.

• Fennell was recently released from prison after serving 10 years for charges that he kidnapped and sexually assaulted a woman while he was on patrol as a Georgetown Police Officer.

• An insurance salesperson witnessed Fennell telling Stites “If I ever catch you messing around on me, I will kill you and no one will ever know it was me that killed you”.

• A former Lee County Sheriff’s Office Deputy witnessed Fennell looking over Stites’s body at her funeral and heard him say something like, “you got what you deserved”.

Neither Fennell nor Reed man is without history. Reed had been accused of misconduct but was found not guilty in the only case that was prosecuted. On the other hand, Fennell has a long history of sexual assault documented by the Texas Department of Safety and he spent 10 years in prison for sexual assault.

On November 12, 2019 from 6 pm to 8 pm at the Thurgood Marshall School of Law at Texas Southern University, the Earl Carl Institute, Urban Research and Resource Center and the Death Penalty Awareness Society will host a forum free to the community, to provide additional information about this case as they work together to keep the state of Texas from executing an innocent man. The forum will include a video documentary and panel discussion that will include one of the Innocence Project of NY lawyers, Quincy McNeal.