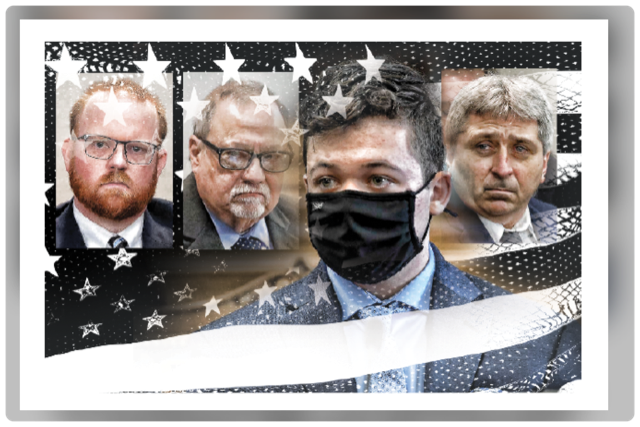 One hung his head low, one bit his lip and one just looked like the world bottomed out on him, but one thing is for certain, the three men who thought they could “kill a n$%#@” for sport and get away with it will soon find out what “trapped like a rat” really means.

On Nov. 24, Travis McMichael, his father Greg McMichael and their neighbor William “Roddie” Bryan were all found guilty of felony murder in the cold-blooded killing of Ahmaud Arbery.

“That to me demonstrates what a fair trial ought to look like all of the time. The judge held their feet to the fire, the judge followed the law, the judge admonished them (attorneys) out of the presence of the jury,” said Craig A. Washington, legendary criminal and civil rights attorney who is also a former US Congressman and State Senator. “There is an old saying, if the law is with you and the facts are against you, then you argue the law. If the law is against you and the facts are with you, then you argue the facts. If they are both against you, then you just argue.”

But just as it seems justice will be served for the Arbery family, the families of the two men killed by young alleged White Supremacist Kyle Rittenhouse will not see any form of justice in a system that is, for the most part, stacked against Black America and those in support of it.

On Nov. 19, the 18-year-old killer was found not guilty of all charges in the deaths of Joseph Rosenbaum and Anthony Huber, and was also cleared of charges from the injuries sustained by Gaige Grosskreutz.

The three victims were shot by Rittenhouse On Aug. 25, 2020 at a rally for Jacob Blake, a Black man who was left paralyzed after being shot by a police officer. Rittenhouse claimed he went to the site of the protest in Wisconsin in order to protect businesses and provide medical help if needed. His mother dropped him off, knowing the then 17-year-old was armed with an AR-15-style rifle. In the end, he killed two people and severely injured another.

The men killed were Whites who supported the Black Lives Matter movement and the jury determined Rittenhouse would not be punished for spilling their blood. After his acquittal, Rittenhouse visited former President Donald Trump at his home at Mar-a-Lago. The two posed for a picture together and Trump called Rittenhouse “a nice kid.”

So less than a week later, there was not much confidence that another jury would hold three more White Supremacists accountable for a Black man’s death.

The McMichaels and Bryan, all arrogantly confident at first, learned that they would not get away with taking a young man away from his family far too soon.

On Feb. 23, 2020, Arbery, who was only 25 years old at the time, was out for a leisurely jog through a Georgia neighborhood when the three White men saw him in their neighborhood. They grabbed their guns, jumped into their trucks and one of them pulled out his cellphone video to capture them chasing Arbery down, cutting him off and — in the end — killing him.

Why? The trio said they believed that, instead of jogging, Arbery was a burglar who was stealing from their homes.

Arbery had no weapons nor theft or looting materials in his possession and was not committing any crime other than “jogging while Black” in the eyes of racist White America.

At first, it seemed as if the McMichaels and Bryan were going to get away with it, until video surfaced two months later showing the heinous stalking and killing. And now, more than a year later, they learned that more people are beginning to understand that Black Lives DO Matter!

“He was trapped like a rat,” the elder McMichael told Glynn County police Sgt. Roderic Nohilly after the shooting. “I think he was wanting to flee and he realized that something, you know, he was not going to get away.”

Defense attorneys tried to — unsuccessfully — prove that the men were justified in chasing and trying to detain Arbery because they “reasonably” thought he was a burglar. Greg McMichael told police Travis McMichael, 35, fired in self-defense as Arbery attacked with his fists and tried to grab his son’s shotgun.

“He had an opportunity to flee further, you know,” Greg McMichael said. “We had chased him around the neighborhood a bit, but he wasn’t winded at all. I mean this guy was, he was in good shape.”

Prosecutor Linda Dunikoski has described Arbery as an “avid runner” who lived about 2 miles (3 kilometers) from the Satilla Shores neighborhood where the incident occurred. The men chased Arbery for five minutes before shooting him dead.

“The jury got it right. The man who should have been convicted of what they call murder with malice (in Georgia) and what we call first degree murder was convicted and he is going to get an automatic life sentence. They didn’t go for the death penalty. I could tell they (prosecutors) knew where they were going, and they knew what they were doing. The jury charge was right on the law. The guy who filmed it all made it happen. The case might not have ever been indicted, much less tried,” Washington explained. “They had no business in the world following that young man.  They killed that little boy’s mother’s son. I want that to sink in on everybody – Black, White, Green, whatever. They killed that mother’s son just because they could, and every one of them got the right verdict and every one of them is going to get the right punishment.”

Now the tables will be turned as the new “trapped rats” will be the father, son and neighbor who decided to take an innocent young man away from his family for no other reason than the color of his skin.