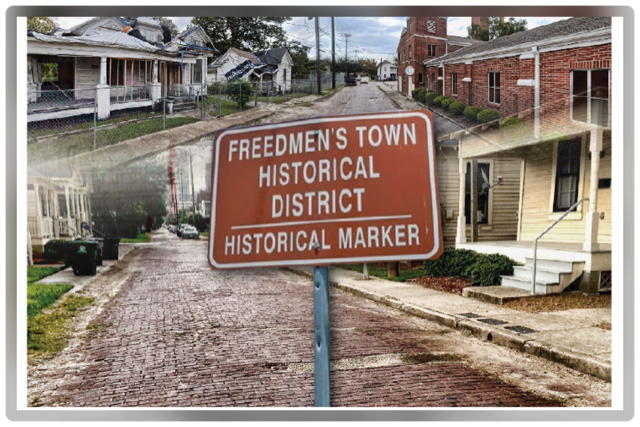 Glady House is a well-respected figure in the community, known as much for her successful businesses as she is for her passion in fighting for the communities in which she serves. African-American News&Issues spoke to House about the history of Freedmen’s Town, in which she is on a crusade to protect and preserve.

AANI: Tell us a little bit about what it was like growing up in Freedman’s Town.

House: I grew up in the heritage Freedman’s Town (Fourth Ward community). I’m the fourth of 14 children; 4 boys and 10 girls, and it was a very close community, everybody knew everybody from one end of the community to the other end. Those were your neighbors, usually, people think your neighbors are immediately next door to you. It didn’t matter where they lived, as long as they lived in Freedman’s Town, they were your neighbors. You didn’t have to worry about people kidnapping children or abusing children. Hell, we all got abused when we got that a** whooping. That’s called child abuse today, but we all survived it. It made us better people for the most part.

AANI: You’re an activist, historian, and preservationist of Freedman’s Town. What made you want to fight for it and other historically Black communities in Houston?

House: Because I found out that our people are not Black, African American, Negro, Colored and all of that, we are Moorish American. We were here before any other people. We are the original people. The need to do research is finding out who you are. And so, as I began to research and dig further into who we are, I was just totally amazed at how we had been lied to. For example, we were told that Emancipation meant freedom when it does not. It means going from private ownership to public ownership.

Our heritage is so great, I had to make sure that I researched Freedman’s Town heritage because, for example, when you trace back the deed in Freedman’s Town, it traces back to Tejas, well Mexico really, all of that, that was us. It’s still us today but the Caucasian-controlled media will not allow our people to be on the forefront when they do these movies, when they talk about Indians.

The Indians were really Siberians, they came over here from Siberia. But Hollywood would have you think “oh they were here always, from the beginning.” No. We are the original people, we’ve been here more than 385,000 years, since the beginning of time.

So, I carefully and respectfully researched Freedman’s Town against many odds. See the Caucasians stole everything from us: our heritage, our culture, our land, our wealth, and even our minds. But because we’re ignorant of our heritage, we just go ahead and let folks tell us anything…

We have as a people “old blood” that stands for original; original man and original woman. They want to keep us ignorant so that we won’t reclaim our estate. We taught them everything, but destruction, that’s in their DNA. We have to be careful about what we create next time.

AANI: Seeing other historically Black wards like the Greater Third Ward and The Greater Fifth Ward fight against rapid gentrification, what advice do you have for residents of these areas? How can we preserve our history and heritage?

House: Well first of all let’s do Third Ward because 90% of Third Ward has been owned by Caucasians… since they first stole the land from our people. It was easier despite having the largest number of Moorish elected officials residing in Third Ward …

Ninety-five% of the grassroot people in Third Ward have been pushed out. So… I told people to start your own plan for your community. Divide your community into quarters, four parts: Northeast, Northwest, Southeast, Southwest, and assign people to work in each quadrant where they live and to monitor and serve on different committees.   We do that in Freedman’s Town but the city council refuses to let us know about anything. It will take an act of the legislature to return the grassroot people back to their original land and everywhere.

Now Fifth Ward has a ghost of a chance to take and preserve and to block gentrification.  What people don’t realize is that we want new development in Freedmen’s Town, but we want it the way we want it, where it would be affordable for our people so that all of the thousands of families who were displaced could return.

Another thing to notice is when you go in the inner-city neighborhoods, Third Ward is a blazing example;  churches remain, but the people are gone.  The preachers got their money a long time ago and they didn’t care what happened to the people of Third Ward. How much money is enough to sell off your people for generations to come?

So I tell people to get involved in your community. Everybody’s too busy to look into…  the indigenous communities in the city or outside of the inner city because gentrification is hitting you everywhere.

AANI: What’s next for Gladys House?

House: The same I’ve been doing; working for my community. I have a vehicle inspection station as well as my floor covering business but I  continue to take on the injustice that’s against Freedmen’s Town and any of our Moorish American communities and causes… I just continue to do what I can until I’m given a different assignment by the universal creator. Our ancestors are watching everything we do and say.

COVID Vaccine for kids 5-11: What you need to know
Self-improvement is key to our survival
Comment