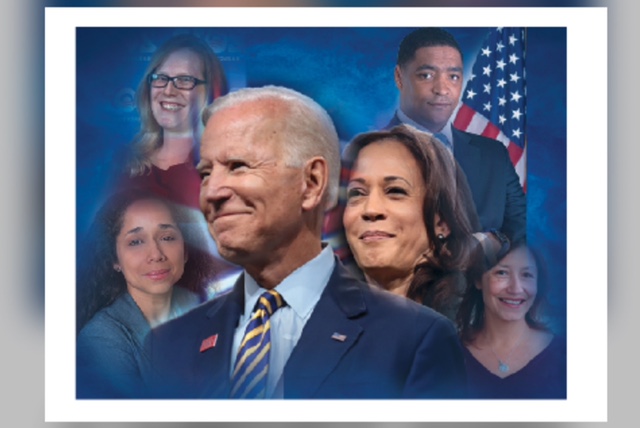 President-elect Joe Biden ran a campaign saying he wanted to reclaim “the soul of the nation,” and promised that, if elected, he would bring diversity to the White House.

Biden and Vice president-elect Kamala Harris have developed a transition team that consists of 46% people of color and 52% women, according to data. And on his senior staff, people of color make up 41% and women make up 53%.

Biden’s transition team said in a released statement, “These diverse, experienced, and talented individuals demonstrate President-elect Biden’s commitment to building an administration that looks like America.”

So who will help Biden lead the country?

Here is a list of who is in, and who is still in the running.

Ron Klain, one of Biden’s most trusted campaign advisers, will serve as his incoming chief of staff.

Cedric Richmond will serve as senior adviser to the president and director of the White House Office of Public Engagement. Richmond has represented Louisiana’s 2nd congressional district in the US House of Representatives since 2011. He previously served as the chairman of the Congressional Black Caucus.

Julissa Reynoso Pantaleon has been appointed chief of staff to incoming first lady Jill Biden.  A graduate of Harvard University, the University of Cambridge and Columbia Law School, Reynoso Pantaleon, who was born in the Dominican Republic, currently serves as a trustee for New York-Presbyterian Hospital and for Columbia University, and is on the Board of Directors of the Lawyers’ Committee for Civil Rights Under the Law and the Truman National Security Project.

Anthony Bernal will serve as senior adviser to Jill Biden. He worked with Jill Biden for all eight years of the Obama administration, including as the second lady’s director of scheduling, trip director and deputy chief of staff.

WHO COULD ALSO MAKE THE CUT?

Rice was a national security adviser for President Obama, and is considered an experienced diplomat and an expert on foreign policy.

Before serving as a California congresswoman, Bass worked for almost a decade as a physician assistant. She now leads the Congressional Black Caucus.

This Atlanta mayor made headlines for being outspoken on racial justice issues. Since winning the mayoral election in 2017, Lance Bottoms has prioritized affordable housing. Before becoming mayor, she served as a judge and an Atlanta city councilwoman.

Before serving as a Florida congresswoman, the former Orlando police chief had a 27-year career in law enforcement.

Sen. Duckworth is an Army veteran who served in the Iraq War. If nominated, she’d be the first Thai American in the Cabinet and the first woman to serve as secretary of defense.

Michèle A. Flournoy, Secretary of Defense

For two decades, García worked as an elementary school teacher in Utah, having entered schools originally as a lunch lady. After an unsuccessful congressional run in 1998, she cemented her career in education advocacy and reform, ultimately serving as the president of the National Education Association.

Deb Haaland, Secretary of the Interior

When she was elected to the House in 2018, the Arizona representative became one of the first Native American women elected to Congress.

Haines, the first woman to serve as deputy CIA director. After completing law school at Georgetown University, she clerked in the U.S. Court of Appeals.

Before serving North Dakota in Congress, the one-term senator worked for the Environmental Protection Agency and served as North Dakota’s attorney general.

Elizabeth Warren, Secretary of the Treasury

Sen. Warren is a progressive favorite who ran against Biden for the Democratic nomination. She is a staunch advocate for economic equality and reform.

During the Obama administration, Sherwood-Randall served as deputy secretary of energy and was Biden’s chief adviser on foreign and defense policy right out of grad school at Oxford University, where she was a Rhodes Scholar.

When President Trump took office, Yates was the acting attorney general but lasted just 10 days. In January 2017, she was fired for refusing to defend Trump’s “Muslim ban.”

Yang is an entrepreneur and former 2020 Democratic presidential candidate, centering his campaign around the idea of universal basic income. Yang joined CNN as a political commentator in February, after dropping out of the presidential race.

Sanders was a senior adviser to the Biden 2020 campaign. Sanders worked as national press secretary for Sen. Bernie Sanders during his 2016 presidential campaign and later joined CNN as a political commentator. She is also under consideration for principal deputy press secretary.