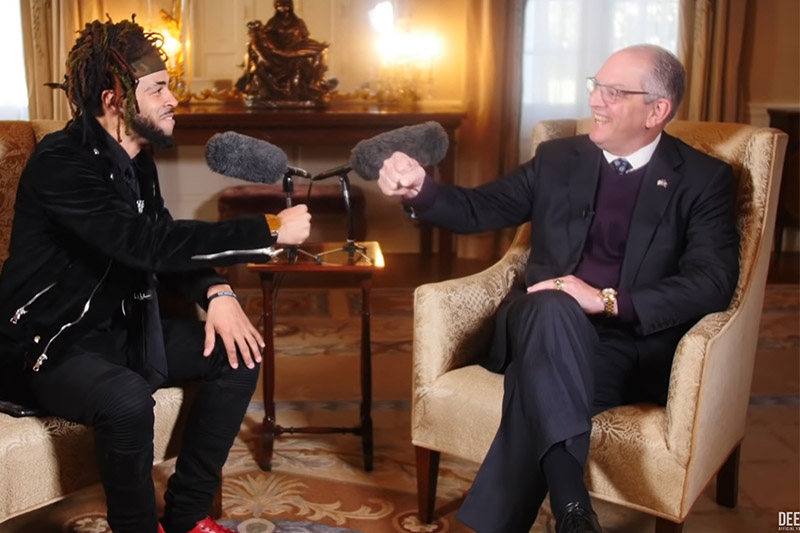 NEW ORLEANS, LA – November 14, 2019 — New Orleans rapper Dee-1 sat down for Louisiana Governor John Bel Edwards in a historic pre-election one-on-one interview. This interview was a first in Louisiana history for a hip hop artist to publicly interview the state’s governor. The 30-minute interview, was held at the Governor’s Mansion in Baton Rouge and focused on the topics of healthcare, criminal justice reform and education.

Dee-1 says, “This interview was a huge step forward for this state. To be able to chop it up with the governor about real issues that deeply affect my community and truly understand his vision for the next four years was major. I am honored to have had this opportunity to educate and empower members of my community and my fanbase so that they can feel confident about choosing the best candidate to lead the state of Louisiana for the next four years.”

Over the last several years, influencers within the hip hop world have become increasingly more vocal about the power of the political process. Dee-1 joins the likes of artists such as Killer Mike, Jay-Z, Travis Scott, Beyonce, Diddy and others who have publicly become politically engaged. The presence of hip hop in the political process has opened the eyes of many within urban communities across the nation who may not have otherwise been aware of the importance of these elections and how directly they impact their communities.

Louisiana Governor John Bel Edwards will face Republican opponent Eddie Rispone in the runoff election on November 16th. Edwards, a moderate Democrat, was first elected in 2015 and was facing a challenge from two Republicans, Rispone and Representative Ralph Abraham, who represents Louisiana’s fifth congressional district. Louisiana is one of three states with a gubernatorial election this fall, the other two of which are Kentucky and Mississippi.

The entire Dee-1 & Governor John Bel Edwards interview can be found at https://www.youtube.com/watch?v=Hnik3AjIEu8&feature=youtu.be

ABOUT DEE-1:
If Tupac and Lauryn Hill had a son, it would be Dee-1. He is truly the voice of a generation, and has skyrocketed from doing local talent shows to rocking worldwide tours. Growing up in New Orleans, the temptation of the streets was very appealing. But these same streets broke Dee-1’s heart when his best friend got murdered. At that moment, Dee knew that God called him to break the cycle of negativity, so he chose a different route. Dee began rapping in college and became very popular on campus, but upon graduation, he decided to use his charisma and swagger to become a middle school teacher to reach the youth. He soon traded his classroom for a microphone and a stage, and the rest is history. Dee-1 entered the rap game on a mission: To inspire people everywhere to “Be Real, Be Righteous, and Be Relevant.” He has since released some of hip hop’s most powerful albums and has collaborated with platinum artists such as Lupe Fiasco, Macklemore, and Sevyn Streeter. His single, “Sallie Mae Back,” went explosively viral and became known as the “debt-free student loan anthem.” His latest album, ‘Slingshot David,’ is his most exciting project, carrying a theme of finding your Slingshot and using it to defeat your Goliaths—a concept everyone can relate to. From his dreads to his outfits, to his raps, Dee-1 is a colorful personality full of raw energy and pure hype. As he continues to rock big stages and make hit records, all he asks of the people is to stay focused and keep their #MissionVision sharp at all times. 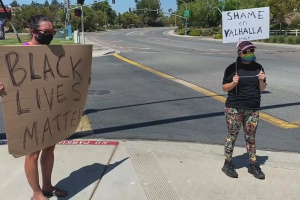