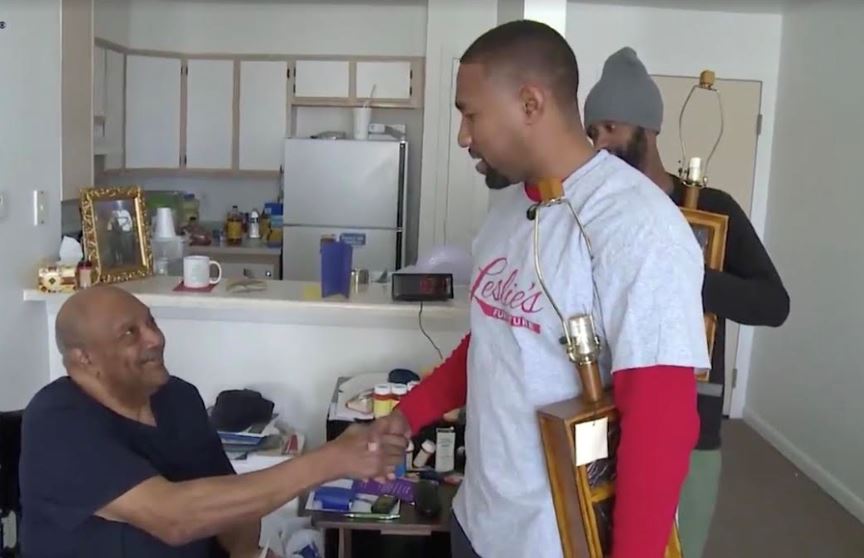 HOUSTON – He thanks the good Lord up above, the community who’s rushed in to help and the reporters who’ve brought his story to light, Bobby Simon has plenty to be thankful for, and he’s expressing it all through a river of “happy” tears.

The ex-NFL player is overwhelmed by the love and support he’s receiving after his story, which was featured first in African-American News&Issues, has touched hearts from all around.

AANI released “Never Giving Up: The Bobby Simon Story” in our print and online publications in December, and afterward, other media outlets reached out, wanting to help.

KHOU 11 News Sports Extra, with our help, connected with “Mr. Bobby” and aired his story on the station’s weekend program.

The combined coverage from AANI and KHOU got things moving — swiftly.

The story of the former Houston Oilers player is an emotional one, highlighting the ups and downs of the man struggling to recover after losing his wife to cancer and his foot to diabetes – just days apart- while fighting to recover from the devastation of Hurricane Harvey.

Neither the city, the government or the NFL provided any sought assistance for Simon, and his life became a day to day challenge of trying to keep his head above water, while keeping his spirit intact.

Simon, a graduate of Grambling State University, was drafted to the Oilers in 1976. He was living out his NFL dream when it all came to an abrupt halt.

The stage was the historic Houston Astrodome and Simon was tackling Dallas Cowboys legend Tony Dorsett when his foot got caught in an old pitching mound. He spent more than a year on the injured reserve list before eventually being released from the team.

Fast forward to one of the worst storms Texas has ever seen and the death of his wife, the aging athlete found himself alone – the couple never had children – and in the fight of his life.

Simon bounced around from shelters and temporary homes before eventually finding permanent housing at a senior living apartment community in southwest Houston. Grateful to have a roof over his head, his focus was on getting mobile. For the last two years, he has been forced to scoot around in a busted wheelchair, and even though he’s filled out mountains of paperwork and visited multiple doctors, no promises have been kept. With his arthritis getting worse by the day, he can barely get around.

Leslie Larose-Nash, owner of Leslie’s Furniture in Missouri City, saw Simon’s story, the tiny mattress he was sleeping on and his clothes stacked neatly on the floor. She knew exactly what he needed.

She handpicked a new queen-sized bedroom suite, with sturdy top-of-the-line mattresses and dressers for his clothing, in addition to giving him a new living room group. The black-owned family operated business then surprised him with a delivery.

“We love putting smiles on people’s faces and Mr. Bobby’s smile was priceless. There’s nothing like being a blessing to others,” Larose-Nash said.

Dozens of letters have poured in, offering help to provide food, clothing, supplements and wheelchairs. A team, led by Oilers legend Elvin Bethea, is sorting through it all.

While Simon still has a way to go before walking again, his trust is soaring and his Faith in God, which has never left, remains strong. There still is one void – his wife.

“I miss her,” Simon told AANI. “I wish she was here to enjoy what is happening today.”

AANI will provide more updates as they become available.