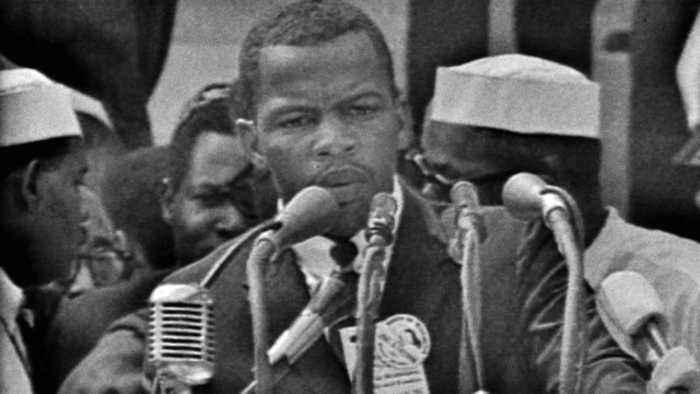 John Lewis was the youngest person, at age 23, to address the crowd at the March on Washington, but DID YOU KNOW his original speech was fierier than the one he used that day? Philip Hannan, a Catholic archbishop of Washington, D.C. at the time, received a copy of the speech ahead of time and found it came across as too incendiary. So, Dr. Martin Luther King Jr., A. Philip Randolph, and other movement leaders made changes to the speech before Lewis stepped up to the podium.

Here are some key excerpts of the unedited speech:

…In good conscience, we cannot support wholeheartedly the administration’s civil rights bill, for it is too little and too late. There’s not one thing in the bill that will protect our people from police brutality.

…The voting section of this bill will not help thousands of black citizens who want to vote. It will not help the citizens of Mississippi, of Alabama and Georgia, who are qualified to vote but lack a sixth-grade education. “ONE MAN, ONE VOTE” is the African cry. It is ours, too. It must be ours.

…People have been forced to leave their homes because they dared to exercise their right to register to vote. What is there in this bill to ensure the equality of a maid who earns $5 a week in the home of a family whose income is $100,000 a year?

…To those who have said, “Be patient and wait,” we must say that “patience” is a dirty and nasty word. We cannot be patient; we do not want to be free gradually. We want our freedom, and we want it now. We cannot depend on any political party, for both the Democrats and the Republicans have betrayed the basic principles of the Declaration of Independence.

…The revolution is a serious one. Mr. Kennedy is trying to take the revolution out of the streets and put it into the courts. Listen, Mr. Kennedy. Listen, Mr. Congressman. Listen, fellow citizens. The black masses are on the march for jobs and freedom, and we must say to the politicians that there won’t be a “cooling-off” period.

…We won’t stop now. All of the forces of Eastland, Bamett, Wallace and Thurmond won’t stop this revolution. The time will come when we will not confine our marching to Washington. We will march through the South, through the heart of Dixie, the way Sherman did. We shall pursue our own scorched earth policy and burn Jim Crow to the ground — nonviolently. We shall fragment the South into a thousand pieces and put them back together in the image of democracy. We will make the action of the past few months look petty. And I say to you, WAKE UP AMERICA!