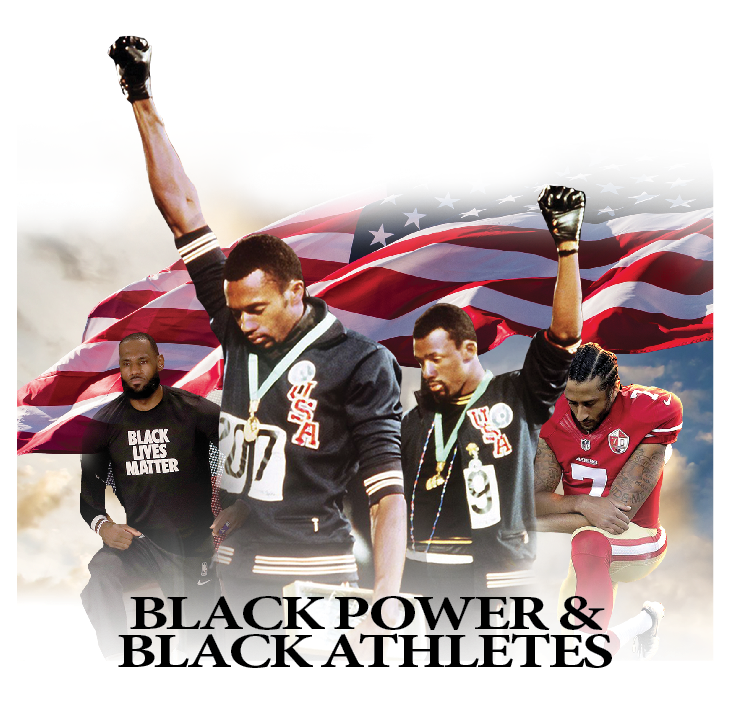 If you stand for nothing, you will fall for anything; we’ve heard that a million times before. And when you decide to take a stand – true warriors realize that you have to lay it all out on the line—the guts, the glory, the fame and yes, the FORTUNE! The way to maintain Black power is to sometimes turn your back on the “almighty “dollar-dollar- bill y’all,” and it is long overdue that Black athletes today start to get on the bandwagon for justice started by Black athletes decades ago.

During a medal ceremony in the Olympic Stadium in Mexico City on October 16, 1968, two African American athletes, Tommie Smith and John Carlos, each raised a black-gloved fist during the playing of the US national anthem, “The Star-Spangled Banner.” While on the podium, Smith and Carlos, who had won gold and bronze medals respectively in the 200-meter running event of the 1968 Summer Olympics, turned to face the United States flag and then kept their hands raised until the anthem had finished. In addition, Smith, Carlos and Australian silver medalist Peter Norman all wore human rights badges on their jackets.

The demonstration is regarded as one of the most overtly political statements in the history of the modern Olympics.

Fast forward several decades later, and another Black athlete took a stand in front of the nation in the name of civil rights for the culture. Former San Francisco 49ers player Colin Kaepernick refused to salute the America he feels has brutalized African Americans for far too long, and it cost him his NFL career and many endorsements, but NOT his dignity or self-respect.

As noted on Wikipedia, In the 49ers third preseason game of the 2016 season, Kaepernick was noticed sitting down during the playing of “The Star-Spangled Banner” as opposed to the tradition of standing. During a post-game interview, he explained his position stating, “I am not going to stand up to show pride in a flag for a country that oppresses black people and people of color. To me, this is bigger than football and it would be selfish on my part to look the other way. There are bodies in the street and people getting paid leave and getting away with murder,” referencing a series of African American deaths caused by law enforcement that led to the Black Lives Matter movement and adding that he would continue to protest until he feels like “[the American flag] represents what it’s supposed to represent.”

In the 49ers’ fourth and final preseason game, Kaepernick knelt in protest during the National Anthem to show respect to former and current U.S. military members after having a conversation with former NFL player and U.S. military veteran Nate Boyer.

After the September 2016 police shootings of Terence Crutcher and Keith Lamont Scott, Kaepernick commented publicly on the shootings saying, “this is a perfect example of what this is about.” Photos then surfaced of him wearing socks depicting police officers as pigs. In a statement he acknowledged wearing them as a statement against “rogue cops.” He maintained that he has friends/family in law enforcement and that there are cops with “good intentions” who protect and serve, and he was not targeting all police. Kaepernick went on to kneel during the anthem prior to every 49ers game that season.

His protests all but ended his career as he was “black balled” from playing.

Still, he stood firm on his beliefs that Blacks were not being treated fairly in America, and sadly, it has been proven over and over again. This time, though, more athletes decided to step up and fight for right, and the NFL started to realize what Kaepernick was fighting for.

It should be noted that three-quarters of NFL players are African American, yet nearly every NFL team owner is white (and several are prominent Trump supporters).

NFL Commissioner Roger Goodell put out a statement apologizing for not listening to the concerns of African American players. The Times wrote that Goodell’s “words were panned as hypocritical because of the league owners’ rejection of Kaepernick.”

In August, after the police shooting of Jacob Blake Jr., another unarmed black man, Goodell said that he wished the NFL had listened earlier to Kaepernick’s reasons for kneeling.

So, is everyone else listening?

NBA athletes including Lebron James began protesting in the name of social justice, and even the Houston Rockets canceled a game. Former Rockets player Kenny Smith unmic’ed and walked off the set of an ESPN sports show he co-broadcasts, tired of police brutality against Blacks.

If we want change, we must demand it. It’s either put your money where your mouth is – or better yet — SNATCH the bread out of the mouths of these Fortune 500 business owners, athletic organizations and franchise owners, and any entity of power by removal of the Black Dollar.

Take a STAND now…or take a KNEE… with your BLACK FIST RAISED proudly in the air. Your LIFE DEPENDS ON IT. — AANI