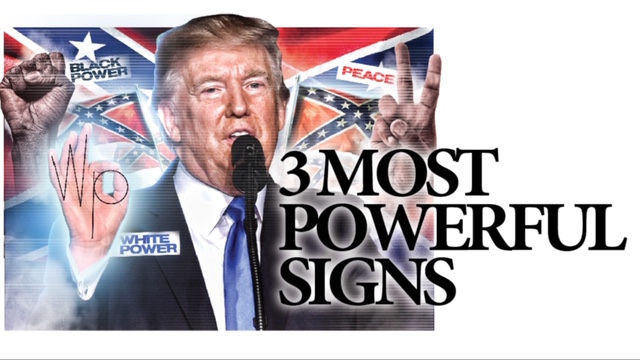 One hand, one sign, one message and a million different meanings depending on who you are or what stage of WOKE you’re in, but SIGNS we silently “throw up” give a glimpse into the windows of our souls. So, are you paying attention?

PEACE …two fingers, shaped like a “V.” It’s part of the phrase of “Love, PEACE and Soul,” shouted by the late, great Don Cornelius at the end of Soul Train. It was the symbol of the Flower Child in the Hippy Era and has evolved into a Hip-Hop Era “Chunk up the Deuce,” meaning “Stay well, good wishes and I’m out!”

But did you know, its origins, according to reports, is more likely related to the once extremely close, but now long ago decayed, relationship between hippie culture and Christianity-Jesus Freaks. The peace symbol, with two fingers extended but apart, the thumb folded over the remaining fingers, has a close correlation with Jesus’ sign of benediction; the only difference being the two fingers touching or close rather than in a wide V.

BLACK POWER! Throughout history, the raised clenched fist has been a demonstrative act of rebellion against institutional oppression.

As noted on the BlackSheepAgency.com, one early visualization of the clenched fist was depicted by Honoré Daumier and was likely inspired by the Revolution of 1848 that saw the overthrow of King Louis-Philippe’s monarchy. Daumier, who was in Paris during the time known as the “Bloody June Days,” was moved by the intense passion of the people and used the raised fist as a symbol of their “strength, determination and will to fight.”

The 1968 Olympics in Mexico City became the site of one of the most highly publicized (and criticized) uses of the raised fist. Months prior, the United States was reeling from the assassination of Rev. Dr. Martin Luther King Jr. and the ongoing civil rights turmoil. American track athletes, Tommie Smith and John Carlos, viewed the games as a critical platform to speak out from for better treatment of black athletes and black people around the world. When Smith and Carlos won gold and bronze respectively in the 200m dash, they raised their fists, protesting racism and injustice on the world stage.

And today, Black Lives Matter has brought the raised fist back to the forefront as a symbol of resistance and defiance, shouting, “We can no longer watch from the sidelines what is happening in our nation. We must raise our hands and voices until we force those who are blind to these injustices to acknowledge and protect us.”

WHITE POWER and President Donald Trump – If you look carefully, our nation’s president can be seen displaying the White Power sign at many public appearances. While some say it’s merely a hand gesture, others say it’s a signal of support to the Aryan nation. Some white supremacists may use a two-handed handsign in which one hand forms the letter “W” and the other hand forms the letter “P,” to represent WP or “White Power.” And others use what appears to be just an “OK” sign, but is there a bigger meaning behind it?

According to the Southern Poverty Law Center, the problem, of course, is that there are white nationalists, neo-Nazis and Klansmen who have increasingly begun using the use of the symbol both to signal their presence to the like-minded, as well as to identify potentially sympathetic recruits among young trolling artists flashing it. Be on the lookout, you may have folks flashing things around you that you aren’t even aware of. STAY WOKE AND INFORMED! — AANI