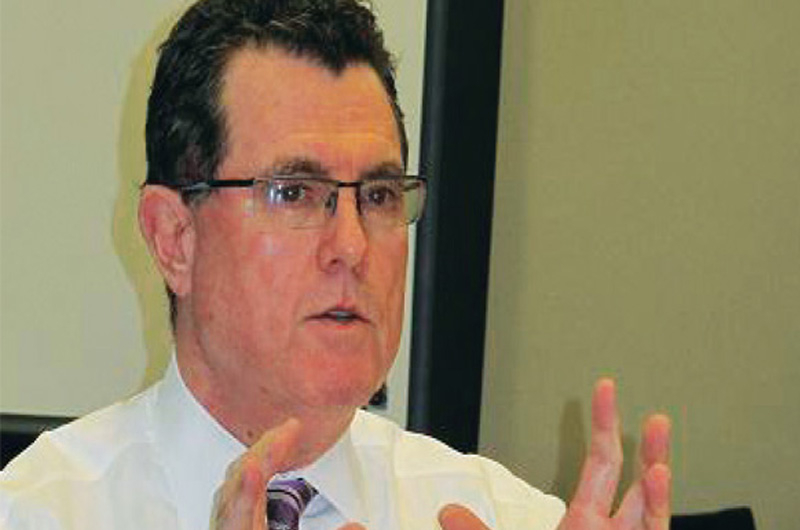 Since coming to Houston, Grier’s job has been to navigate a constant hall of mirrors in which he has had to tread firmly, yet carefully, so as not to disturb the delicate balance of funding, schools, communities and parents and dealing with a school board making decisions affecting the district’s direction and future.
Spread the love

When it Comes to the Education of Houston’s Children: “The Buck Stops Here”

“You know, it’s easy for the Monday morning quarterback to say what the coach should have done, after the game is over. But when the decision is up before you — and on my desk I have a motto which says The Buck Stops Here’ — the decision has to be made.” President Harry S Truman in an address at the National War College on December 19, 1952 .

Houston- With leadership comes tough decisions and those decisions have not always been easy or popular for  Houston Independent School District Superintendent Dr. Terry Grier.

Since coming to Houston, Grier’s job has been to navigate a constant hall of mirrors in which he has had to tread firmly, yet carefully, so as not to disturb the delicate balance of funding, schools, communities and parents and dealing with a school board making decisions affecting the district’s direction and future.

“My goal is to be fair and balanced,” Grier said in an exclusive interview with African-American News&Issues. “I want the same for all HISD children as I would for my own children – I want them to be able to read, have a chance to succeed and have a sense of optimism that gives hope and provides opportunity to every youth.”

Grier became the Houston Independent School District’s superintendent of schools after a unanimous vote of the district’s Board of Education in September 2009. Under his watch, HISD’s graduation rate has increased to its all-time high (81.7 percent). Scholarship dollars offered to HISD seniors have increased from $51 million to $186 million. And the number of students scoring three or higher on Advanced Placement exams has increased by 45 percent, from 4,915 to 7,106.

The district’s Apollo 20 program has received state and national recognition—effectively eliminating the math achievement gap in Apollo elementary schools and reducing it by one-half in Apollo middle and high schools.

He is committed to placing an effective teacher in every HISD classroom and an exemplary principal in every school. To help ensure this, the district’s teacher and principal evaluation models contain indicators of student success. Grier is widely recognized for his leadership in turning around failing schools.

The results of many of his decisions have shaken up the education landscape and caused small “quakes” of disdain, unrest and protest from parents, activists and community leaders who believe the decisions place the future of the district on shaky ground –  a charge Grier contends is premature and unfounded.

Grier said he is aware of the unrest, activism and conspiracy theories and the calls for his job, but remains undaunted and will continue to do what he feels will keep the district growing, educated and prepared for the future.

“History shows that this has been a longstanding problem in Houston, but I don’t want the friction or bad relationships to occur or continue,” he said. “I am what you see. I don’t play games and don’t have any hidden conspiracies. What I want is for all our children to get a quality education and I want all students reading on grade level by the Third grade.”

Grier said his sole focus is on educating children and one of the first ideas he wants to dispel is the idea that there is a conspiracy against Black neighborhoods or to close schools in the Black communities in HISD.

“Are they part of a conspiracy,” he said. “Why are they not supporting their own neighborhood schools?

According to Grier, some activists came and boycotted his home, but the irony of the issue is that many of those who protested the closing of neighborhood schools either sent their children to private schools or opted to enroll and send their children to more affluent schools in West Houston.

Sending the those children out of the neighborhood drove the cost per pupil costs to levels that simply were not acceptable, he said.

For example, Jones High School has 2000 kids in its attendance zone, but the district was spending $3 million for three years to educate 450 students – the cost to educate being about $17,000 per student, compared to $6,500 per student in other schools. Even with the spending and improvements in education and safety, parents from the neighborhood still did not put their children back in Jones.

“People get upset and say I am being disrespectful,” Grier said. “I am being reasonable. I am giving you the facts. Many African-American politicians and parents did not send their kids to school in the areas proposed for closing…if parents wont put their own student there what are we going to do?”

He also added that still fewer of the same protesters ever told the public the truth about it and currently do not come to the neighborhood school to volunteer, read or speak to kids at those schools on a regular basis.

Grier emphasized that he is working for the success of every student and continues to work hard to make schools fair, balanced and equitable.

“I don’t want any child dropping out of school,” he said. “If you are an African-American male, and you drop out, there is an 85-percent chance you will be incarcerated before your 25th birthday. We all know that and see that and I worry that we are not dong enough about it.”

Grier said he is committed to preventing such grim statistics by starting early with children and working to solve the literacy issue, especially among African-American students.

“The group that is doing poorest in reading is our African-American children,” he said. “There needs to be loud call to arms among our parents, preachers and community activists… If I were an activist, in my own way, I would raise cane and want to know why we aren’t teaching these kids to read and who is getting in their way.”

“The district has spent $9 million for new books for all elementary schools that will go in classrooms,” he said. “The books are grade level appropriate and there are books in every library at all levels available to read and that are interesting, culturally relevant and will engage kids.”

He also added that books are in every classrooms that can be taken home to help nurture and develop skills and is encouraging kids to take books home.

Grier noted that even though parents are busy and working two or three jobs and trying to make ends meet, but he suggested that if parents in the Black community would read with or to children 20 minutes a day, seven day a week, it would help to defeat the literacy problem in the community.

Also, encourage children to read to us 10-minutes each day before school.

The superintendent makes clear his commitment to developing and continuing plans to address and eliminate inequality and the perception that rich school get more than poor schools.

That formula includes considerations for such things as special education, free and reduced lunch, handicaps and language.

“We change the way magnate schools are funded. People from poorer backgrounds need more money than an affluent school does so, it is based on a per pupil formula to determine the need,” he said. “That is the way to be fair and that is the way to be equitable. That has never happened before in Houston.”

“We have tried to be consistent,” he said. “Funding is the same no matter where your school is located, regardless of zip code or part of town. It is balancing the scales based on funding and pupil ratios.”

In other programs, elementary and Fine Arts programs get $350 per student to run school. Middle School are getting $250. High Schools $1,150

He hopes that the community will step forward and partner with him for the overall future of the district.

Community and Board Relationships

“We have a heavy load to pull and we can’t pull it by ourselves,” he said. “ We have to have community help and support…. some of the people pushing, others pulling and some digging to help us gain traction. It takes a total community to do it and we welcome them to come because we must do it together.”

Grief said he feels good about the great representation on board from the African-American  community.

“Each are advocates for quality education and outreach,” he said.

With community involvement and developing relationships at the center of Grier’s plan for educational progress, the most important pieces of the plan is what parents are willing to do once kids get home from school.

One of the ways be believes the standards can be raised quicker is more parental involvement with children at earlier ages that focuses on boosting reading and literacy among young children.

“PTA and volunteerism are good, but real issue need help is what happens at home and in the home,” he said.

“It is very important to take time, read to and with child because it would help us deal with the  literacy issue.”

Grier addressed the discipline report for the Office of Civil Rights that showed police citations, suspensions and police involvement with students in HISD are down compared to other districts in the area.

One of the ways has addressed doing that over past several years in teacher training and changing the school facades.

“We started making schools looking less like minimum security detention centers in neighborhoods and more like education and learning centers.”

He got rid of old chain link fences, barbed wire had them replaced adding more appropriate. Take down fencing and upgraded facilities and facades.

“My children in the poorest parts of town are going to have facilities that look like the wealthiest part of town,” he said. “ I will not present a negative image to kids that the schools in their neighborhoods are so dangerous that we have to have barbed wire and metal detectors… We got that part licked.”

He also issued redirections on how the campus police and teachers deal with crisis on school campuses.

“It needed to change because you can’t treat a child bad or make him or her feel like a criminal and then expect him to want to learn or his behavior to be good,” he said. “We stopped the nonsense of giving tickets at school for simple disrespect and such. No tickets are given unless a violation of law occurs.”

He also encouraged officers to find different and more positive ways to relate with young people.

“We are proud of the progress, but we still need to work on getting our staffs to develop more tolerance and understanding when it comes to African-American males and special education students,” he said. “There is still a lot of work still to do”

In his farewell address to the American people given in January 1953, President Truman referred to this concept of ultimate accountability and responsibility when he said that, “The President–whoever he is–has to decide. He can’t pass the buck to anybody. No one else can do the deciding for him. That’s his job.”

Texas Round Up: What’s Happenin’ around Texas?
Dr. Virgil A. Wood: Civil Rights Giant Still On the Battlefield
Comment