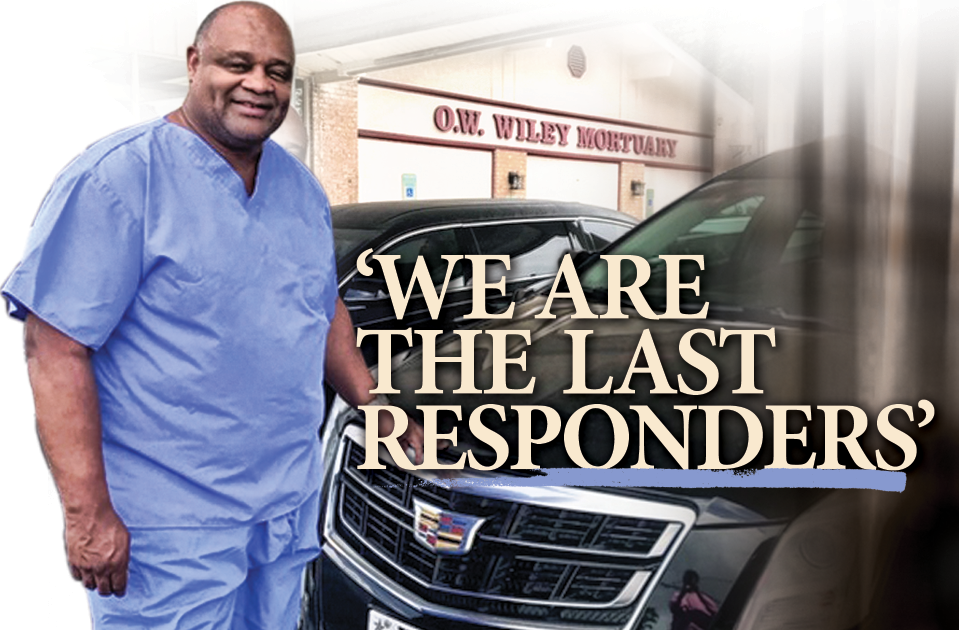 HOUSTON — In 1953, Ebony magazine reported there were 3,000 black-owned funeral parlors across the country, and last year, that number had decreased to about 1,200, with nearly a dozen remaining across the Houston area. Many African Americans continue to rely on the comfort and security from familiar faces when it comes to burying their loved ones, especially during the COVID-19/ coronavirus global pandemic.

In an effort to keep everyone safe, funeral directors have had to implement strict new procedures for services and burials.

And he knows firsthand what it is like being in the trenches. He’s been the person who’s had to collect the bodies of those who died due to the virus.

“When we walked into a hospital to collect our first body and saw so many patients on the ventilators, when we got back to the funeral home, it was an emotional time,” he said. “That’s when things were just getting big in the news and everyone was so confused about what to do, it could blow your mind.”

Wiley and his team would not allow fear to hinder them from giving the high quality his mortuary, which has been a staple in the community for more than 20 years, has provided to clients.

African-American News&Issues asked Wiley to share more about how the crisis has affected business practices.

Q: Do you handle bodies differently now than before the pandemic?

A: No. We use the same precautions we’ve always used. We do this every day anyway. I came through the era when we had AIDS, when no one knew what it was, I was a young embalmer then. When handling bodies, we wear our gowns, aprons, masks, gloves and face shields. You must realize, the doctors can tell you only so much when you receive those first calls to pick up a body and take them to your prep room, so we prepare for things that the person may have had that may not be on the death certificate.

Q: What changes have been made for the way you hold your funeral services?

A: Now, less is best. We make sure everyone we deal with keeps the 6 feet distancing rule, even when making the arrangements. We used to have three or four different families in our business at the same time, but now we only have one family in the business at one time. That means longer hours of work for us, but it is something we must do.

Q: Has there been a significant increase in business?

Q: Where do you conduct the funerals?

A: We actually just had our first funeral at a church because, over the last seven weeks, most were not fully open to the public. Before that, they had to be held at our funeral home and it was very difficult. We’d gather the family and would let them know we could only give them a one-hour service because we had to disinfect the chapel and get ready for the next round of funerals. We would hold several in a day. But you know what we found out? Families still had fantastic services and they couldn’t believe it was accomplished within an hour.

Q: On average, how many funerals are you now conducting?

A: We are getting one to three calls a day right now, but it’s a whole lot that goes into that. We’ve been here in the community for 20 years, the good services we provide, the great embalming that we do; all of that goes into it. Last year we did over 300, which is a lot of cases, and this year, we might hit 375 to 400 cases because that is the rate we are going at.

Q: Has there been an increase in cremations? Do people think that is safer?

A: No. You don’t have to cremate a person who died from COVID. What you have to realize is after you embalm a body, 99 percent of the time, what they had is gone. Your first priority in embalming is disinfecting the body.

Wiley says COVID-19 has been a serious attack, and despite all the fears, he will continue to give the people what they need.

“When God tells you to serve something, it does not matter if it is good or if it’s bad. No matter how a person died, we deal with it,” Wiley said. “We are in the death business. There’s a lot of pride in the word ‘undertaker.’ We are the last responders.”