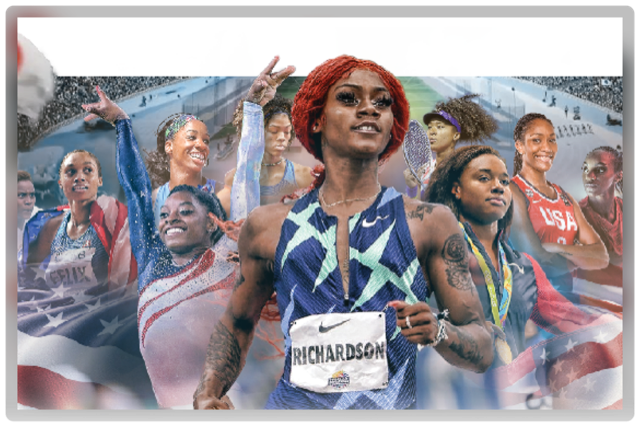 We are witnessing a very special moment in history for Black women in the Olympics. While we will always have our FloJo, Jackie Joyner-Kersee, Debi Thomas, and so many other Black female Olympians, this new roster of Black women headed to the 2021 Tokyo Olympics is stirring up high levels of pride and anticipation within the Black community.

The roster includes both celebrated veterans like Simone Biles and favored newcomers like Sha’Carri Richardson. This year’s Olympics are also shining the spotlight on Texas, which produced a heavy amount of Olympians for the U.S. this year.  Here are the 11 Black women who’ve solidified their place as Olympians on the road to Tokyo.

Richardson has had the Black community in a supportive uproar all over social media on various platforms. She is as authentic as they come and is an unapologetic Dallas, Texas native. She’s a star and she knows it. She dominates the cameras as well as she dominates the track with her signature bright orange hair and larger-than-life personality. The 21-year-old sprinter solidified her place as a competing Olympian and the fastest woman in America after finishing the 100-meter heat in 10.64 seconds last Saturday.

But the thing that made her a household name in the Black community was her interview right after finishing the race, where she expressed her gratitude to her family and shared how she continued to train even after the death of her biological mother just days before the race.

“My family has kept me grounded,” Richardson said. “This year has been crazy for me. Going from just last week, losing my biological mother, and I’m still here to make the family that I do still have on this earth proud. I’m highly grateful for them. Without them, there would be no me. Without my grandmother, there would be no Sha’Carri Richardson. My family is my everything, my everything until the day I’m done.”

Native Houstonian Biles, is an obvious world favorite. She has conquered the globe with her daring and often dangerous stunts. She is the face of gymnastics and continues to push the boundaries of what the human body can accomplish. She is pushing the boundaries so far that gymnastic officials banned certain moves she performed because it could be dangerous for other gymnasts to attempt. Despite their efforts to limit this Black female athlete’s influence on the future of the sport, Simone Biles continues to be a feared and respected name in gymnastics and in athleticism.

Manuel, a native of Sugar Land, Texas, is known for making history as she became the first Black woman to win individual Olympic gold in swimming during the 2016 Olympics in Rio. Continuing to break barriers, stigmas, and stereotypes, Manuel secured her position as a 2021 Olympian after winning in the 50 meter freestyle. Manuel did not qualify for the 100-meter dash, which she won gold for in 2016, because of overtraining syndrome (OTS) which she was diagnosed with and was required to take a three week break. The Olympian shared how her anxiety, insomnia, and low performance affected her.

Cunningham, daughter of former quarterback Randall Cunningham, was first introduced to the world during the 2016 Olympics in Rio De Janeiro where she stood in 13th place. The 23-year-old high jumper qualified for the Tokyo Olympics by clearing 6 feet and 5 inches.

Though the official US women’s soccer team has yet to be released, it is projected that Dunn will join the U.S. team in the Tokyo Olympics. The 28-year-old defender has played for the U.S. women’s soccer team on and off since 2013 and led the group to win the 2019 Women’s World Cup.

Dunn is also the co-founder of Black Women’s Player Collective, an organization that aims to “elevate the image, value, and representation of Black women as athletes and leaders in business, industry, and public and private institutions,” as stated on the website for BWPC.

Four-time Olympian Felix qualified for her fifth Olympics last Sunday after finishing second in the 400 meter race.   This Tokyo Olympian will be competing for the first time as a mother since giving birth to her daughter Camryn in 2018.

Harrison won the 100-meter hurdle jump last Sunday and secured her place on the U.S. women’s track team for the 2021 Olympics. Harrison did not qualify for the Olympics in Rio in 2016 but did not let that stop her from pursuing her goals as an Olympian.

Hinds, from Midland, Texas qualified for the 2021 Olympic swim team by placing fourth in the 100-meter freestyle on Friday.

“I feel like the reason I’m so emotional that I made this team is because I’m just really proud of the courage and vulnerability that I showed myself, that I had a goal and I did absolutely everything that I could do to obtain that goal, and I finally did,” she said after the victory.

Tapper shared in an Instagram post that she was selected for the U.S. women’s rugby team. Tapper was a track and field star and didn’t even start to play rugby until she played for the University of North Carolina in 2012.

Wilson is competing on the U.S. women’s basketball team alongside WNBA greats Sue Bird and Diana Taurasi. The 24-year-old is a three-time SEC Player of the Year and was even commemorated with a statue at her alma mater, the University of South Carolina.

Osaka has been making waves in the world of athletics. The 23-year-old tennis player has been the center of controversy this year after placing her mental health first by her withdrawal from the French Open and Wimbledon. Her actions have garnered a lot of criticism by “fans” and sports officials who feel that the highest paid female athlete in the nation should attend conferences and play tennis because “it’s her job.” But Osaka is leading a revolution in the way we view athletes and their personal lives. Many other athletes have expressed their support, including NBA star Stephen Curry. The Japanese-American tennis star is back and better than ever and ready for Tokyo.

Clemons finished third in the 100-meter hurdles and secured her position as an Olympian. She expressed her gratitude in an Instagram post.

The amount of love God has for you trumps the pain you feel and if you can just be patient (not your type of patient but Gods type of patient), and allow God to build your CHARACTER, you will turn out to be the best you possible. You will begin to live in your purpose. You will shine and be set free!” 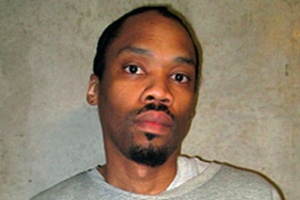 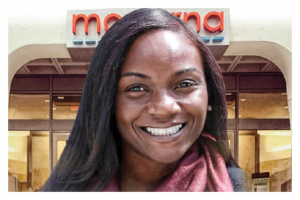 ‘The Shepherd’ Manson Johnson: Rest in peace, my friend

‘The Shepherd’ Manson Johnson: Rest in peace, my friend