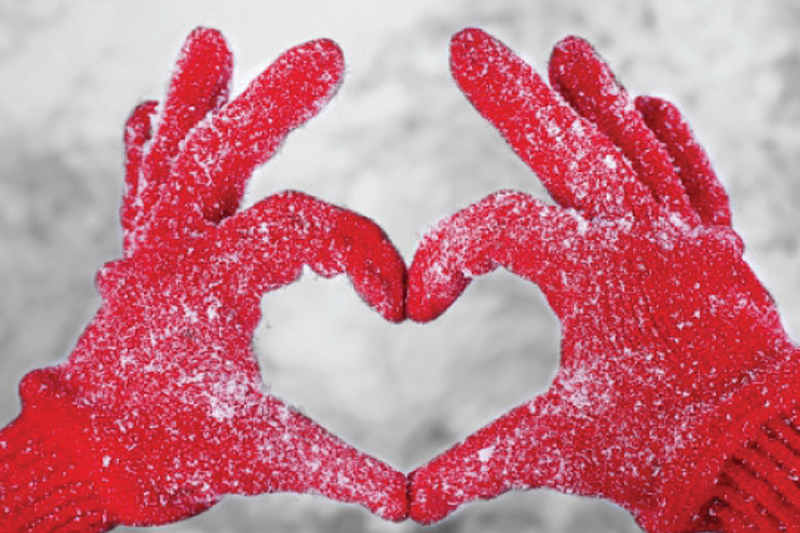 I really can’t stay (But, baby, it’s cold outside)

This evening has been (Been hoping that you’d drop in)

HOUSTON – Who doesn’t love Ray Charles’ and Betty Carter’s version of Frank Loesser’s Academy Award winning song, “Baby, it’s cold outside,” which gained wide recognition in 1949 when it was performed in the film Neptune’s Daughter? Well, aside from the latter-day #MeToo movement’s questionable lyrics claim, the opener is the perfect kickoff for the time of year which is upon us — it’s Cuffing Season, baby!

For those of you who don’t know what Cuffing Season is, it is the time of year when it seems everyone wants to grab a “cuddle buddy” or get “boo’ed up,” as they say. According to the Urban Dictionary, during the fall and winter months people who would normally rather be single or promiscuous find themselves desiring to be “cuffed” or in a serious relationship. The cold weather and prolonged indoor activity cause singles to become lonely and desperate for any kind of companionship, yep, even the half-assed attempts.

Like the song says, “Baby, it’s cold outside,” and while you may think you are “hot and heavy” with a new love interest or may be excited that your old flame came back into your life, you may need to be aware, it could be a seasonal thing and you could be single again – very soon!

It is easy to say you won’t get caught up, but let’s face it, sex during Cuffing Season is probably some of the best sex you may get all year. That’s why we get so crazy when it’s all over in the spring. (LOL)

Think about it. The holiday season already makes us feel “all warm and fuzzy” inside and, after being paraded around in front of his or her family members, you feel even closer to the person you’re with. But don’t completely ignore the nosy, outspoken aunt who mumbles – loud enough for you to hear – “this one ain’t gonna last long either.”

Nonetheless, after the great family dinners, holiday work parties and meet-and-greets, the two of you go home to one of your warm beds and let’s just say— release the type of “exhales” Angela Bassett and Whitney Houston were waiting for. Ahhhh, that Cuffing Season is something to behold!

One indicator of how long you may or may not last is the Christmas present. Trust me, if you’re nothing but a holiday “cuff,” expect perfume or cologne, my dear. When someone knows they are not going to keep you around too long, they are not about to shell out any significant amount of dough. Sorry, that’s just the way it is! No blue-box surprise from Tiffany’s and you better not even think about Jared’s! In fact, it may be best to just turn the channel when the commercials come on because you know “you ain’t about that life!” And it ain’t about you!

In all fairness, it’s easy to fall for it. We all need someone to hold sometimes, to give us that deep burn in the pits of our stomachs, even if it is all a damn (temporary) lie.

It’s a risk that singles take every day, so what do you do and how do you protect yourself? Stick with the “thou shalt not” Biblical rules? Or implement the Steve Harvey 90-day dating game waiting period? Well, in the era of millennial-made Netflix and Chills, they may not be buying what we’re preaching, and some hearts may be broken a few thousand times.

I say enjoy it while it lasts…like little animals that store nuts for the winter…do the reverse and prepare for the dry season. By the time the spring comes, the “Cuffing Season” romance will have ended, and you’ll be deleting the #BlackLove #RelationshipGoals photos from your Instagram pages.

Hey, believe it or not, I am a hopeless romantic and I believe that true love is waiting for everyone one day. I am also a woman whose been burned by the “Cuff bug” and I am just here to tell ya, many of you will too. But it will be OK. Just know that your girl here warned ya in advance, so when the other shoe drops, just keep on stepping with your head held high – or dare I say – you COULD have really met your actual soul mate. Either way, proceed with caution and good luck out there, Cuffing Season is in full swing!