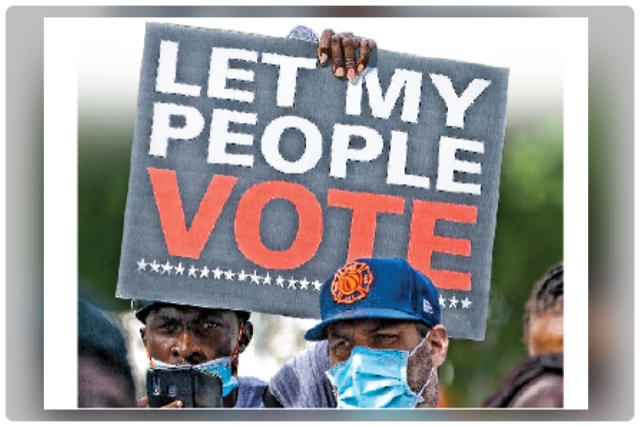 The voting rights fought for in blood during the Civil War era are being reversed in front of our eyes, and the Republican Senate isn’t even trying to hide it.

The Republican Senate committed a filibuster — an action to obstruct progress or action on a bill — on Tuesday regarding an ambitious voting rights bill calling for reform.

Voter suppression has run rampant across 48 states with over 300 voter restriction laws and continues to go unchecked by the federal government. These restriction laws primarily target Black and Brown communities, young people, people with low incomes, and people with disabilities.

In an effort to counter these blatant acts of discrimination and voter suppression, national campaigns such as the Freedom to Vote campaign proposed the For the People Act.

The For the People Act addresses preventing deliberate barriers that affect targeted demographics from voting, making campaign finance transparent, and creating national standards for voter accessibility such as early voting, online voting, pre-registration for 16-17 year olds, and protection against voter roll purges. The act also demands ethical reform for the Judicial, Legislative, and Executive branches of the federal government.

Another major proposed federal legislation is the John Lewis Voting Rights Advancement Act, which ensures that changes made to local and state elections are reviewed by the federal government, otherwise known as a federal pre-clearance, and restores full rights that were included in the original Voting Rights Act of 1965.

Preclearance in the original Voting Rights Act of 1965 ensured that counties, towns, and states that could not be trusted to hold non-discriminatory elections, due to their history, would have elections reviewed by the federal government.

In a federal Supreme Court ruling of Shelby County vs. Holden in 2013, the court decided that the formula for determining which areas needed preclearance was outdated and called on Congress to update the formula.

Eight years later in 2021, Congress still has not updated the formula for preclearance, and the lack of action has severely weakened the Voting Rights Act of 1965.

The weakening of the Voting Rights Act of 1965 and the sheer number of Republican-led states taking advantage of that fact is why the Republican filibuster was a slap in the face to the American people, but especially to the Black community which has historically labored, suffered, and sacrificed for the right to vote for all.

“In the fight for voting rights, this vote was the starting gun, not the finish line,” said Senator Chuck Schumer, Democrat, of New York and the majority leader. “We will not let it go. We will not let it die. This voter suppression cannot stand.”

But because of the Republican Senate blockade, Democrats will have to find another way to push against the voter suppression that’s ravaging the country.

For now, only the Justice Department can challenge state voting laws, a tedious process that is often unsuccessful. The fate of voting in America also lies in the hands of smaller coalition groups who will help targeted voters to navigate through shifting and difficult rules.

The voting reformation bill would have been the largest change to voting rights in over five decades. It would have ended partisan gerrymandering and provided a new campaign financing system, which means big donors would no longer have the power to buy our elections.