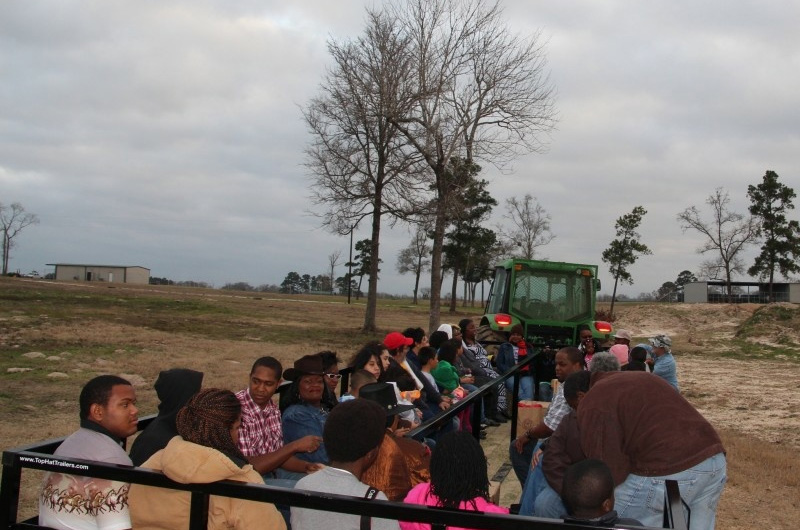 BoyScout Troop 1906, Cub Scout 338of Prairie View and three youth in the Aldine ISD Future Farmers of America members at Eisenhower High School got a taste of success with some hands on experience spending a day at the RS Deer & Cattle Ranch.
Spread the love

WALLER COUNTY– Preparing men of color for life and leadership are keys to raising the next generation of Black and Hispanic leaders.

BoyScout Troop 1906, Cub Scout 338of Prairie View and three youth in the Aldine ISD Future Farmers of America members at Eisenhower High School got a taste of success with some hands on experience spending a day at the RS Deer & Cattle Ranch. Both the scout troop and pack has been rated one of the best in the United States. Aldine FFA students competed very well with their animal entries and competed to raise money for scholarships.

The event was hosted by RS Deer & Cattle Ranch. The youth were given a tour of the ranch via hayride and shared some valuable lessons in animal care, Black History, leadership and business.

For 18-year old Gabriel Joubert, the lessons he learned about running a ranch kept him focused on his goals of someday owning a farm. Joubert, who is in FFA and has been raising animals for several years, recently raised a steer that was a healthy 1,133 pounds that was sold at Aldine’s 55th Annual FFA Show.

“Doing this takes a lot of patience and love,” Joubert, who comes from Acres Home area said. “I really learned a lot about many ways to use land. It gave me a real look into the business and what I want to do with my future.” His steer started out at about 500-lbs and he spent countless hours and long days walking, feeding his steer and caring for each animal. He also raised a goat and pig and sold his animals at the show.

Demarcus Spearman, 17, is no stranger to farms and farming. He took his 600-lb calf and raised it to be  a 1,335-lb steer – 2nd largest in class at the Aldine show. “This was a great experience for me and gives me something to work toward,” he said. “I already have set goals to work on taking a small ranch and using the land and animals to control my own destiny.”

The tour consisted of learning the ins and outs of raising and caring for cattle and deer and some of the industry and marketing demands and business and recreation opportunities available for those choosing a career in land management and agriculture.

For 12-year old Callista Duncan, the trip to the ranch was not only fun, but also proved to be a lesson in life. She not only developed an appreciation for the animals, but learned that deer antlers tell a story about a deer’s value, but also gives insight into his family and leadership status in the herd. “I think that is so neat,” she said. “It makes me appreciate deer and cow a whole lot more now than before.”  Duncan said another thing that was impressive to

her was the way the hosts treated everybody and how they showed the value of hard work.

“I learned you can be successful no matter where you come from,” she said. “You can do great things and you don’t have to give up on life or yourself.”

Cub Scout Darren Skeen, 11,  thought deer lived only in the wilderness and was amazed that so many could live together in one place on the ranch.

“I had never been to a ranch and I saw up close life on a ranch and I really enjoyed being here,” he said. “It makes me think about ways I can raise animals and make money too.”

Cub Scout Jason Perry, also 11, said at first he did not know what to expect, but warmed up once he realized how much fun it is being around the animals.

“I appreciate them taking time with us,” he said. “I learned a lot about what it takes to care for animals.”

FFA student Trenton Allen, 18, said developing relationships with animals helps him understand patience and how to treat people. He raised and cared for eight turkeys and sold six at Aldine show. “It really teaches me to take being responsible seriously,” he said. “It also let me know my options in life and if I never stop imagining what I can do, I can and will achieve great things.”

Another important fact youth mentioned that was interesting was learning the history about how many Blacks who owned land and farms before the great migration period in American History. The great migration caused many Blacks to leave the South, their lands and agriculture fields to pursue jobs in the industrial North. “I see the power of owning land here today,” he said. “If you own your own dirt, you control your destiny.”

Scout Troop 1906 Scoutmaster Cameron Estwick said the day at the ranch helps reinforce the building of character and leadership  and teaches accountability to his scouts, which are predominantly African-American and Hispanic. His group has six members, some who are advancing and working towards becoming Eagle Scouts. The group has been formed since 2010. “We appreciate this labor of love to our kids and for exposing them top positive skills and talents,” he said. “I can tell the kids were listening and we know that seeds were planted that will cause our children to be inspired by it.”

For Pack Cub Master Marian E. Jackson, helping the children learn, grow and achieve is her highest goals working with youth. She believes it does take a village to raise youth. She nurtures about 20 from her group. The Cub Scout pack was started in 2007 and was started after one at Prairie View A&M faltered.

“I feel a duty and obligation to work hard to help raise and direct young Black men and men of color,” she said. “We want them exposed to positive everyday learning experiences because we feel that will help us raise up educated men who will be inspired to grow up to be great leaders.” Jackson, who also serves as Justice of the Peace in Waller County Precinct 3, said too many young men are growing up without direction and support and that trend is what she wants to change.

“There is a real need in this community,” she said. “That is why we bring  in people from all walks of life and give them and opportunity to learn, grow and practice positive skills.”

She is also flanked by Tim Perkins and Assistant Scoutmaster Brian Chapman who also work with Jackson and Estwick.

Parents who spent a day on the ranch not only were impressed with what it takes to run an active ranch, but also that African-Americans were doing it.

“I am a country girl and I am glad to see this and what is being done here,” said Sonia Perry, mother of a Cub Scout.”I think it is great and will have a positive affect because it shows our kids that it is okay to enjoy and appreciate land and also to think outside the norms of the box.”

Bartender Ernest R. McClure shares insights about our Black Past and Future
“The Yellow Rose of Texas”: Black Historians Sound off on the History of the “The Yellow Rose”
Comment