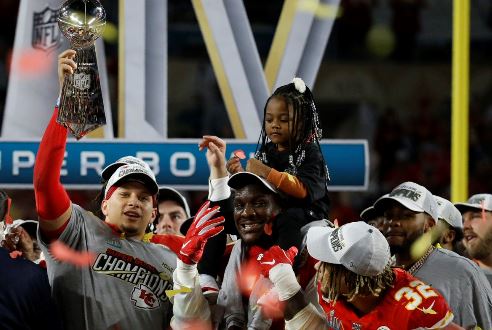 Wilson won the championship in 2014, beating Peyton Manning’s Denver Broncos in Super Bowl XLVIII, and Williams led the Redskins to victory over the Broncos to win the trophy in 1988 in Super Bowl XXII.

In securing the franchise’s second Super Bowl title and first in 50 years, the Chiefs rebounded from at least 10 points to win each of their three playoff games, something no NFL team ever had done.

Before advancing to Miami, Kansas City overcame a 24-0 deficit in the divisional round to the Houston Texans, and a 10-0 hole in the AFC championship game against the Tennessee Titans.

Down 20-10, Kansas City took over at its own 17-yard line with 8:53 to go in the fourth. Mahomes drove the offense 83 yards down the field in 10 plays and hit tight end Travis Kelce for a one-yard touchdown with just more than six minutes left, only down 20-17.

After the Chiefs’ defense forced a three and out, Mahomes led his team downfield again on a 65-yard drive that ended with a pass to running back Damien Williams for a five-yard touchdown and with a 24-20 lead with 2:44 left in the game.

Williams scored a 38-yard touchdown run to seal the deal for Kansas City for a 31-20 lead with a little over a minute left to go, after the Chiefs’ defense defused the 49ers’ last drive of the game by sacking San Francisco quarterback Jimmy Garoppolo on fourth down to get the ball back.

How did Mahomes want to celebrate? He exclaimed, “I’m going to Disney World!”