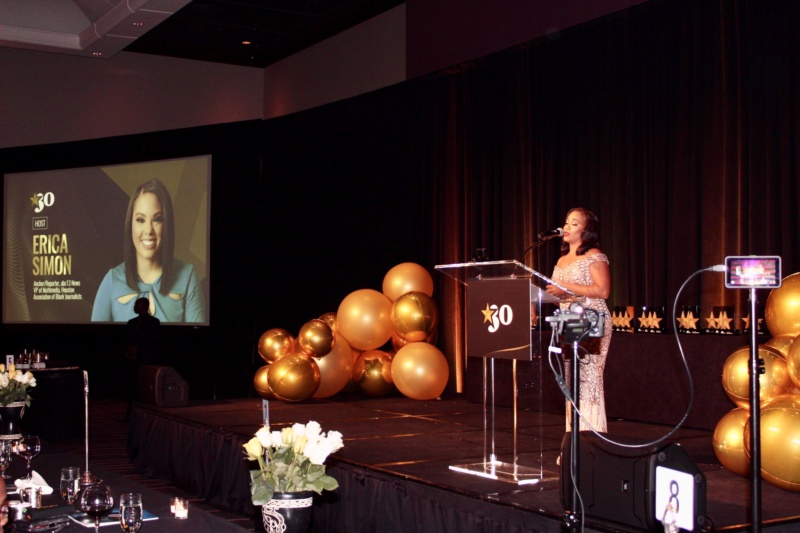 It was networking above networking as more than a hundred guests filled a ballroom at the Royal Sonesta Hotel near the Houston Galleria Nov. 15 to honor 30 of the best and brightest professionals in various shades of darkness from around the nation.
Spread the love

HOUSTON – It was networking above networking as more than a hundred guests filled a ballroom at the Royal Sonesta Hotel near the Houston Galleria Nov. 15 to honor 30 of the best and brightest professionals in various shades of darkness from around the nation.

30 Black Stars is an initiative created by Face2face Africa to highlight and celebrate the achievements and impact of African, African-American, and Caribbean-American business and professional leaders in the United States. Each year, the organization identifies and honors outstanding professionals, across all industries, who have distinguished themselves and are paving a way for minorities through a commitment to excellence.

The evening was emceed by Erica Simon, ABC 13 weekend morning anchor and Vice President of Multimedia for the Houston Association of Black Journalists.

“I’m still processing Face2Face Africa’s 30 Black Stars. Literally, my mind is blown. I not only got to host the awards ceremony, but I got to network and be in the room with brilliant Black business and professional leaders from around the globe. The 30 African, Caribbean-American and Black American honorees represented a number of nations — Ghana, Nigeria, Liberia, The Democratic Republic of Congo, Haiti, Jamaica, Antigua, the United States and many more,” Simon said. “Forget what us mainstream media may tell you. The African continent is alive and well, and its descendants across the diaspora are making major cultural and corporate impacts. Kudos to the Face2Face Africa team (you forever have a friend in me), and all who put together this regal event. I’m challenged and inspired to go deeper and be greater.”

Roxie has been at the forefront of celebrating the beauty of multicultural women since she founded LAMIK in 2004, while still a college. Armed with her savings and a small investment from her mother, Roxie set out to build a meaningful business. After obtaining her Esthetics license, she established a manufacturing hub, and opened her first store in Sharpstown Mall.

In 2012, the LAMIK brand launched in Macy’s Texas locations making her the youngest African American woman to launch a cosmetics brand in a major department store. Her business continues to thrive today, and when she isn’t traveling the country inspiring women and spreading the LAMIK love, she’s resting at home in H-Town with her husband, toddler daughter, and bonus son.

“It felt amazing to be honored amongst top professionals from all around the country in my hometown. In addition, throughout the awards, it’s like we are now inducted into a society of people who will assist each other to shine brighter,” Roxie told African American News and Issues. “With Face to Face Africa holding its inaugural 30 Black Stars awards in Houston, choosing to hold this display of Black Excellence here, shows the opportunity this city provides for all professionals.”

The Black Stars Conference was designed to facilitate empowering discussions around diversity and inclusion and advancing the leadership pipeline for minority professionals. The goal of the forum was to empower attendees with the tools and resources they need to increase their capacity, and examine what companies are doing to cultivate a more inclusive culture to harness the strengths and full potential of professionals within ethnic communities. The conference concluded with the awards gala, honoring the 30 achievers.