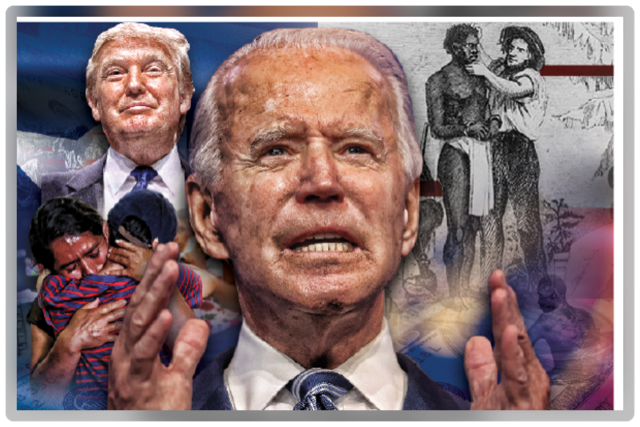 Some people are true fans of the changes, especially when it comes to diversity and inclusion, that President Joe Biden has brought to the White House, but some criticize that his campaign promises, specifically ones made to the Black and Brown communities, were nothing more than gimmicks to ensure he won the presidency.

Recently, many feel a reported proposal from President Biden to pay $450,000 per family to migrants separated at the border under former President Donald Trump’s rule a slap in the face to Black Americans.

Under Trump’s “Zero Tolerance” policy in 2018, more than 5,600 children were separated from their families as the parents were federally prosecuted for illegally crossing the southern border. Because the Trump administration did not have a system in place to reunite the children with their parents, more than 1,000 families remain separated.

But Biden has come out disputing that  claim, saying those reports were “garbage.” The American Civil Liberties Union, however, said his administration did make commitments.

The ACLU in a statement argued Biden would be turning his back on a core campaign promise to provide a measure of justice for those separated under the Trump policy.

“President Biden may not have been fully briefed about the actions of his very own Justice Department as it carefully deliberated and considered the crimes committed against thousands of families separated from their children as an intentional governmental policy,” ACLU Executive Director Anthony D. Romero said in a statement, urging Biden to “right the wrongs of this national tragedy.”

The ACLU, as well as other organizations, have filed lawsuits against the government claiming that the prolonged trauma caused by the separation has had negative mental health effects on the families.

“Prolonged trauma.” That’s only one of the phrases that can be used to describe Black Americans’ experiences in this country. From the atrocities committed during chattel slavery, to the brutal Jim Crow laws, to the systemic racism and anti-blackness embedded into the structures that hold this country together, Black people have endured generational trauma, and any requests for compensation are immediately shut down.

While rumors swirled of the migrant payout, critics pointed out that Vice President Kamala Harris shut down Congresswoman Sheila Jackson Lee’s bill for reparations for Black Americans earlier this year.

Rep. Marjorie Taylor Greene of Georgia tweeted about the reported $1 billion bill that could follow if the “reparations” were paid.

“All while Biden keeps the border wide open so more people can illegally invade,” she wrote.

In a follow-up message, she added: “The White Democrat President wants to pay reparations of $450,000/each to illegal immigrants, but totally snubbed Democrat Congresswoman Sheila Jackson Lee’s Reparations bill for Black Americans earlier this year. Not Building Back Better Joe.”

“The impact of slavery and its vestiges continues to effect African Americans and indeed all Americans in communities throughout our nation.  Which is why I am pleased to introduce H.R. 40, the Commission to Study and Develop Reparations Proposals for African Americans Act.  This legislation is intended to examine the institution of slavery in the colonies and the United States from 1619 to the present, and further recommend appropriate remedies,” Jackson Lee wrote when the plan was released. “Since the initial introduction of this legislation, its proponents have made substantial progress in elevating the discussion of reparations and reparatory justice at the national level and joining the mainstream international debate on the issues.  Though some have tried to deflect the importance of these conversations by focusing on individual monetary compensation, the real issue is whether and how this nation can come to grips with the legacy of slavery that still infects current society.  Through legislation, resolutions, news, and litigation, we are moving closer to making more strides in the movement toward reparations.

Rep. Dan Crenshaw compared the amount to payouts received by families of veterans killed in the line of duty. “Biden wants to pay illegal immigrants $450,000 for their hardship while breaking our laws,” the Houston-based congressman tweeted. “For perspective, if a service member is killed in action, their next of kin gets an insurance payment of $400,000. Let that sink in.”

Has Biden become one of many politicians who have pandered to minorities to solidify votes?

Many Black Americans feel there have been zero attempts to support mental, emotional, and physical trauma related to racism in this country. Blacks have been fighting forever for justice and compensation for the trauma endured to no avail. Hispanics

Is it time for Blacks and Hispanics to bond politically and in the community to create agendas for our people, and work together to hold all leaders accountable?

In the end, is it about money for reparations or separations? Or is it long overdue for unity on all fronts?