Fighting for the people is a BLUES job. Martin and Coretta were pursued by “blues hellhounds” nipping at their heels. On the night of their wedding, they had to spend the night at a Black-owned mortuary because of segregation in public accommodations. The Bill Claire Mortuary on Sophomore Street in the re-emerging Silk Stocking of Third Ward H-Town showcases the wedding dress and a facsimile of the honeymoon room.

Fighting for the people is a BLUES job. John Bell Williams in the book, “The King That God Didn’t Save,” explains that the sinister FBI commissioner J. Edgar Hoover targeted Dr. Martin Luther King Jr. when he received the NOBEL prize in Sweden. Hoover planted a scantily-clothed Anglo honey in his descending elevator and then this temptress made a crooked allegation to the front desk regarding Dr. King. Fortunately, the Nobel committed knew of Hoover’s twisted game plan.

Fighting for the people is a BLUES job. When Dr. King went into Riverside Methodist Church in New York to make the case that the Vietnam War was immoral and illegal, many of the clergy, Black and white, jumped ship on the basis that foreign policy was not the business of the American civil rights community although their constituencies were receiving their sons in body bags. Never mind that B-52 bombers were dropping 500-pound bombs and lacing children with napalm. Dr. King gave the quintessential NOT IN MY NAME anti-war BLUES paean. 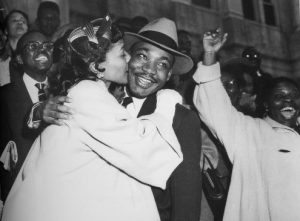 Dr. King strode into H-Town and faced the BOURGEOIS BLUES. Key Black ministers decided to boycott Dr. King and dissuade their members from attending his speech at the Sam Houston Coliseum. Skipper Lee failed to get the memo and took his mountain of soul to a near empty coliseum. Songbird Aretha Franklin blew the Blues away with a ‘I wish I knew how it felt to be free’ Precious Lord.

Dr. King was a BLUES man. He knew the BLUES walk and march. For a change to come, persecution had to be your 24-hour companion. His master has pronounced the BLUES mission when he said, “Foxes have holes, but the son of man has nowhere to lay his head.”

He and Coretta could have been the guests of honor with heads of states and rulers, but he preferred to hang out with garbage collectors in Memphis that ate kidney stew with R C Cola while the titans of government and industry ate caviar with champagne.

This blues man and woman planted a tree to provide shade for future generations. Martin and Coretta helped to teach us how to live and leave a BLUES LEGACY.

Christian Right Evangelicals, The GOP and White Nationalist Groups, there are no exceptions, because we shall all bust out of this physical game of life on earth: “And...

Thanksgiving is one of my favorite holidays. It is not only a celebration of the harvest, but it is a holiday that gives everyone a chance to reflect...

As a nation, we must focus our lives on the ingredients that make us real and not artificial. The most common, destructive circumstances that we are dealing with...

The Art of Science