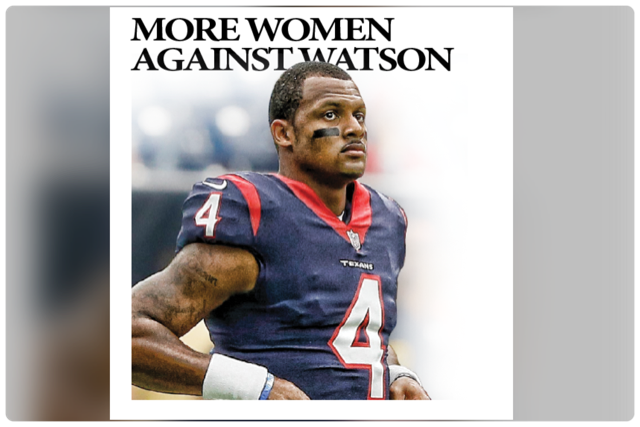 More women are coming out of the woodworks in the case against Houston Texans star quarterback Deshaun Watson, who is accused of having inappropriate behavior with nearly two dozen women.
Spread the love

HOUSTON – More women are coming out of the woodworks in the case against Houston Texans star quarterback Deshaun Watson, who is accused of having inappropriate behavior with nearly two dozen women.

Attorney Tony Buzbee, who is representing the women, is continuously posting about the alleged incidents on social media, saying he is calling out Watson in an effort to empower the women he’s accused of harming.

Many say Buzbee is an attention seeker and is crafting this entire incident as a publicity stunt, while others say Watson used his money, position and power as a way to intimidate, take advantage of, or coerce the alleged victims.

This all boils down to who or what you believe.

According to the lawsuits, the young quarterback allegedly engaged in lewd behavior with the women he hired for massages. The documents also say that Watson used Instagram to find the women and flew them in from various cities.

The allegations range from Watson exposing his body parts to the women, or moving his body in ways in order to make the women touch him.

This all supposedly happened between March of last year to March of this year.

Watson has admitted to finding many of his massage therapists on Instagram, but denied the allegations, saying he “never treated any woman with anything other than the utmost respect.”

Hardin and Watson are disputing the allegations and have produced 18 women of their own who say Watson never touched them during any interactions.

Hardin said the therapists issued voluntary statements of support for Watson, and have worked with him a collective 130 times over the past five years.

The women who are siding with Watson say they find it hard to believe he could do the things of which he is being accused.

Many fans are now wondering what will become of his future –not only with the team — but with the NFL.

As a reminder, Watson signed a four-year contract extension worth nearly $160 million back in September. Unhappy with the team’s direction, he requested a trade in January 2021.

The NFL has opened an investigation.

This case is getting more complicated by the day and should be a reminder of what can happen when money, ego, power or greed are used. We can not say which applies here – it depends on whose side you are on.

Derek Chauvin trial: Believe what you see!
COVID vaccines and our kids – are they safe?
Comment