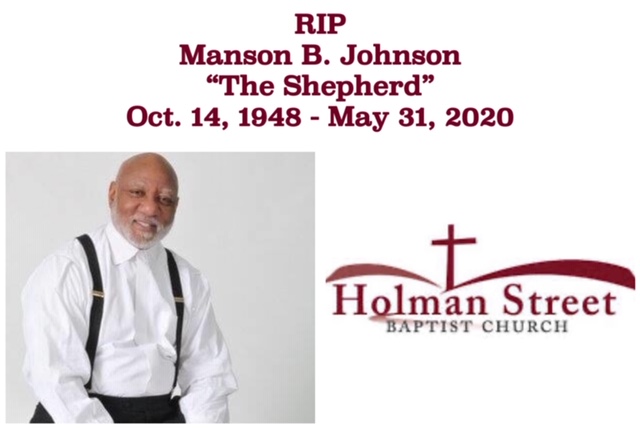 HOUSTON – Family, friends and the community is mourning the loss of Pastor Manson B. Johnson, of Holman Street Baptist Church, who died Sunday after suffering complications due to COVD-19. He was 71.

The church released the following statement about the man everyone affectionately called “The Shepherd.”

“It is with a heavy heart but faith in God to report Shepherd Teacher Manson B. Johnson has transitioned to his Heavenly home this morning. Our Shepherd Teacher loved serving God and God’s people. We find strength in knowing that to be absent from the body is to be present with God.

At this time please keep our beautiful First Lady, his children, family, Holman Street Baptist Church family, and the entire Houston community in your prayers. More details are coming soon. In the words of our Shepherd Teacher, “Stay on TOP! Winners are always at the top! Reach for the stars. Remember losing is a choice that you make!”

Since 1977 the Holman Street Baptist Church has been under the dynamic leadership of the illustrious Manson B. Johnson. He was born in Nashville, Tennessee and reared in Starkville, Mississippi. His father, a pastor, and his mother, a schoolteacher. He left Starkville after graduating from high school and went to Houston, Texas in pursuit of a college degree. Pastor Johnson earned a Bachelors degree in History and Government from Texas Southern University and a certified degree in mathematics from Prairie View A & M University.

After earning his degree, Pastor Johnson went into the field of education and began teaching at Cullen Middle School in the Houston Independent School District. There he served as head of the Mathematics department. He quickly earned the reputation of a no nonsense teacher who was committed to raising the performance of his students in math. Many of his students have come back to tell about the powerful influence he has had on their lives. Others are now faithful members of Holman Street Baptist Church.

During his college years, Pastor Johnson united with Holman Street Baptist Church, a thriving church in the inner City of Houston, located between Texas Southern University and the University of Houston. College students flocked to the church on Sunday mornings to hear powerful preaching and singing. He became an active member of the choir, mission, and Sunday School.

He accepted his calling to preach and was later named youth pastor. He worked diligently with the youth programs, developing and expanding that ministry to draw young people into Christian service. Pastor Johnson’s leadership at Holman Street Baptist Church caused the church to grow in membership and become a dynamic force in the Third Ward Community. His ministry has moved this area of the city into a prominent position politically and economically. Because of his commitment to the revitalization of the Third Ward Community, the face of the community has changed and it challenges the city officials to no longer dismiss this area as stagnant and unproductive.

On September 20, 1998, Holman Street Baptist Church moved into a new worship center under the leadership and direction of Shepherd Johnson.

Pastor Johnson’s preaching was par excellent. His ability to communicate the Bible and make relevant to everyday life was certainly a gift from God. He was a sought after speaker and conducted revivals throughout the country yearly. In addition to being a dynamic preacher, Pastor Johnson possessed an extraordinary gift of teaching. Pastor Johnson also conducted various seminars from Financial Stewardship to Church Development.

Pastor Johnson did phenomenal things in the many years of his ministry. Both his religious ministry and his community involvement speak of a man who has devoted his life to his Lord and to the body of the people he served.

May he rest in Heavenly peace.