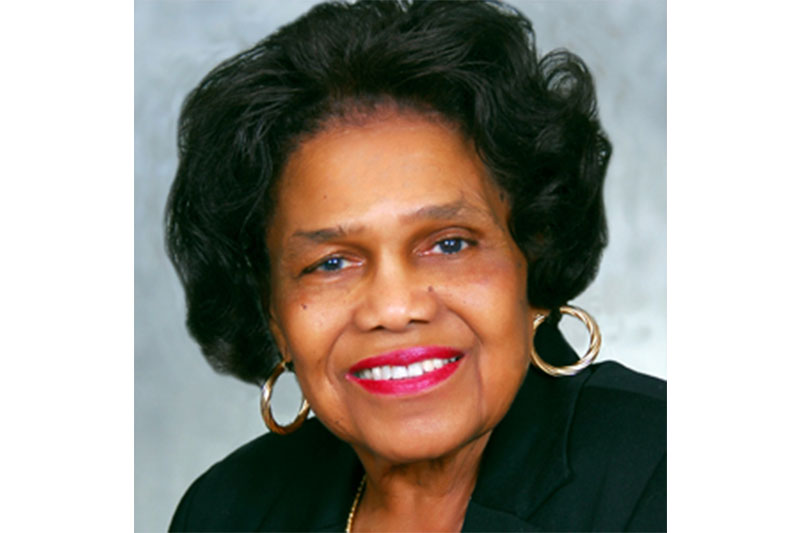 Pioneering medical physician Dr. Edith Irby Jones was born on December 23, 1927 to Mattie Buice Irby, a maid, and Robert Irby, a farmer. As a child, Jones witnessed her older sister die due to a typhoid epidemic and was encouraged to pursue a career as a medical physician. She attended Langston Elementary School and Langston Secondary School both in Hot Springs, Arkansas. In 1944, Jones’ high school teacher helped her obtain a scholarship to attend Knoxville College in Knoxville, Tennessee where she majored in chemistry, biology and physics. While at Knoxville College, Jones was an active member of the Alpha Kappa Mu Honor Society and was initiated into the Delta Sigma Theta Sorority. In addition, Jones was a member of the debate team, pep squad, drama club and the YMCA.

In 1948, nine years before the “Little Rock Nine” integrated Central High School in Little Rock, Arkansas, Jones became the first African American admitted to the University of Arkansas College of Medicine. Although she was not provided with the same housing, dining or bathroom facilities as white students, Jones received support from her high school alumni, neighbors and a black-owned local newspaper, The Arkansas State-Press. Afterwards, she received an internship at the University Hospital in Little Rock. In Arkansas, Jones practiced medicine and worked with Dr. Martin Luther King, Jr. in the Civil Rights Movement before moving with her family to Texas in 1958. In 1959, Jones began her residency in internal medicine at Baylor College of Medicine Affiliated Hospitals, but the hospital that she was assigned to segregated her, limiting her patient rosters. She completed the last months of her residency at Freedman’s Hospital in Washington, D.C., and in 1963, she received an academic appointment as a clinical assistant professor of medicine at the Baylor College of Medicine.

On May 4, 1979, Jones’ achievements were recognized by the State of Arkansas, and she was honored with the founding of the annual celebration of Edith Irby Jones Day. That following year, she became a founding member of the Association of Black Cardiologists Incorporated. In 1985, Jones became the first woman to be elected president of the National Medical Association, and in 1986, she led the United States Task Force on Health to Haiti where the medical and healthcare infrastructure were examined and potential solutions for the impoverished nation were explored.

In 1986, Edith Irby Jones Day was proclaimed by the City of Houston and in 1988 she was named Internist of the Year by the American Society of Internal Medicine.[2] She was one of the founders of Mercy Hospital in Houston and one of the 12 physician owners and developers of the Park Plaza Hospital.[1] Jones also supervises residents at the University of Texas Health Science Center and is active on the board of Planned Parenthood and the Houston School Board.[17])
In 1997, the Edith Irby Jones M.D. Hospital was opened in Houston, Texas. Later, in 2001, Jones was named in Black Enterprise Magazine’s selection of 101 leading black physicians in America. She has received numerous awards and recognitions for her contributions to the medical field and the American Civil Rights Movement including: the Sinkler Miller Medical Association National Achievement Award, Kato Models Woman of the Year Award, Pioneer Award from the Student National Medical Association, Mickey Leland Certificate of Congressional Award, Bennett College Belle Ringer Image Award and the Oscar E. Edwards Memorial Award for Volunteers.