by aframnews
in Community, Local
0

Dannette Davis, of Kay Davis Associates, has donated a $110,000 statue of George Floyd to Harris County. The piece, “A Conversation with George,” created by sculptress Adrienne Rison-Isom, will be installed at Tom Bass Park in late May.

Isom said that it took months of research and learning about Floyd to bring the life-sized bronze statue to life.

“I met with many of Floyd’s family and friends while creating this piece and everyone described him as having a playful, approachable temperament and human nature,” said Isom. “I wanted to represent that by sculpting him with a nonintimidating facial expression and easy-going body language.”

From the beginning, Davis and Isom made it a point to make sure that the Floyd Family Foundation was involved and approved of the sculpture.

“It’s his family and they need to be good with it and support,” said Davis. “If they are good with it, then we know that we have done our job.”

Commissioner Rodney Ellis, whose Precinct 1 includes the Third Ward neighborhood where Floyd grew up, was among the first supporters of the project, along with Houston Councilwoman Carolyn Shabazz. Both city leaders worked with the Kay Davis In The Community Foundation to choose the perfect location. 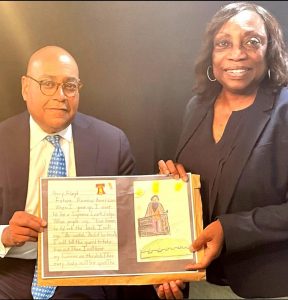 “Initially we thought of the Third Ward area until the idea of Tom Bass Park was mentioned. It was really an aha moment for us all. The beauty of Tom Bass, surrounded by the lakes and nature, really captures Floyd’s peaceful demeanor as described by his family and friends,” Davis shared.

The sculpture depicts Floyd seated at an outdoor table welcoming everyone, all races and ethnic backgrounds to have a seat and join him.

The artist wanted the symbolism to reflect Floyd being an approachable guy who would “spark” conversation or friendship with anyone.

Many may not know that Floyd was also an artist.

Floyd was a major part in the rise of one of Houston’s most notable rap groups, “The Screwed Up Click,” led by the late-great DJ Screw.

The group helped popularize the iconic “chopped and screwed” sound that has become synonymous with Houston rap.

“We all witnessed the impact that George Floyd made on the world, but at the end of the day, he was a ‘regular guy’ with a few extraordinary talents,” Davis said. “He was an athlete and an artist, but he was also a father, a son, and a brother. Just like all of us, he was a multi-dimensional human trying to find his way in this world.”

Davis hopes that the statue will not only serve as a tribute to Floyd, but will also serve as a public histor bookmark, capturing a snapshot of the man whose death became a transformative moment in time for the nation.

“I think it’s important to focus on his humanity and ours, taking a break from the political messaging that typically follows the mentioning of his name,” Davis explained. “How do we make life better for the young people he cared about and mentored? This gift of life-size art should make you ponder your life choices and future. It is also a beautiful, bronze piece to be appreciated and admired when visited.”

Davis believes that the statue will also show Floyd from a unique perspective and foster positive conversations on race.

(Houston, TX) — On Sunday, May 15, 2022, Congressman Al Green released the following statement: “My prayers are with victims’ families and the entire Buffalo community. It is no...

By: Crystal Toussant Renee Logan, Dr. Janice Beal, and Dr. Carla Brailey were the masterminds who conceived the idea to partner with the Holocaust Museum Houston to bring...

Success With The Bar

By: Laisha Harris Twice a year, the Texas Board of Law Examiners has what lawyers call a “Bar exam.” Before a lawyer can engage in the practice of...

My Body My Choice