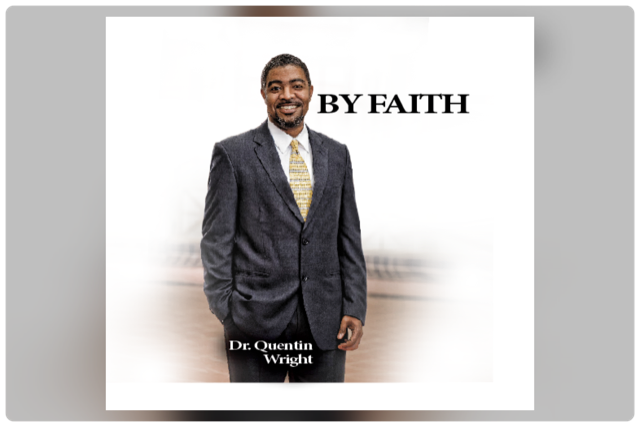 Growing up in McGregor Texas, Dr. Quentin Wright spent most of his time in church as religion was a big part of his life. He grew up in a two-bedroom house which he shared with his mother, grandmother, great grandmother, aunt and brother. They “were that group that went to church three to four times a week.”

Most of Dr. Wright’s childhood memories were in the church.  He and his mother’s early fellowship was with the Church of God in Christ, but he later converted to Baptist. Dr. Wright’s family was not poor, but they were not wealthy either. His description was, “It was a good childhood. I didn’t know what we didn’t have.”

Currently, Dr. Wright is President of Lone Star College-Houston North, but started his educational journey 20 years ago after stumbling into it by mistake. Upon graduating from high school, Dr. Wright was accepted to attend Angelo State University where he received a full track scholarship. As a junior in college, Dr. Wright’s professor, Professor Richardson, became ill and asked him to teach the class because he did not like to cancel class. From that moment, Dr. Wright fell in love with teaching. When Professor Richardson came back to class, he heard that Dr. Wright did a great job teaching. He told Dr. Wright, “This is something you should do.”

Dr. Wright was excited about this new-found love. He reflected on being an athlete, and how the idea of doing something afterwards was just not on his mind. “This was the first time I thought that this was something I could do.”

When he graduated from college, he was encouraged to apply for graduate school and seek a graduate assistant position so that he could continue teaching. He expressed, “To this day, I am grateful that this guy Mr. Richardson found something in me to get into education.”

Dr. Wright met the love of his life in grad school and became engaged. He followed her to Dallas and looked for a job. He became a financial advisor, and then a part time instructor. Stepping out on faith, Dr. Wright decided to give up his financial advisor job to take on two part-time teaching jobs: one in Fort Worth and the other in Dallas. “I don’t know why I did this,” he stated.

He kept both teaching jobs for a year, and then became a temporary full-time instructor at Mountain View College.

At that time, Mountain View College had a program designed to diversify their faculty. Their program was 90% white, with the majority being males. It allowed diverse candidates without much experience the opportunity to be a temporary full-time instructor for up to two years. At the end of two years, Dr. Wright would have to compete for the position. Dr. Wright mentioned that many of his part-time colleagues in his department resigned because they did not like the program.

Later, Dr. Wright went on to receive his doctoral degree, and shortly thereafter, an opportunity came available when his dean announced that she was leaving. At that time, Dr. Wright was in his seventh year of teaching. The faculty met and conducted a poll on who would serve as interim dean, and they selected Dr. Wright. He stated, “It was just ironic, because seven years earlier, I had this protest of me being hired.” Although there were times when Dr. Wright wanted to quit, but he didn’t. He kept the faith and kept pushing forward. He served as dean for five years, and in his last year at Mountain View College, he became interim vice president.

Dr. Wright began his journey at Lone Star College in 2015, where he became vice president at Lone Star College-Tomball. He served in that position for two years, and then became special assistant to the chancellor to work on a special project, which was focused on African American success. After that, he became interim vice chancellor of academic affairs, interim vice president of student success, and now in his current role as president of Lone Star College-Houston North. In just seven years, Dr. Wright has held multiple positions, “and he wouldn’t trade the experience for anything.”

Just like his childhood, religion has a big part in how he runs the college. Being purpose driven, he stated, “There is kind of a religious undertone in about everything I do.” Dr. Wright runs his college with the community being the heart of his focus. He mentioned that “We’re not a community college, we’re a college of the community. The community needs to be better because we’re here, which is why we’re so community focused.” Lone Star College-Houston North is always hosting food drives, and various other events for the community.

Whatever position Dr. Wright held during the span of his career, he tried to do the best job he could in that position. Over time, things happened, and opportunities became available. When reflecting on how far he has come, he had advice to give to his younger self. “The one thing I would say to my younger self is that everything you’re going through is for a purpose. The good, the bad, and anything else, learn from it, because you’re going to use it.” He believes that every experience he has had, led him to becoming president. He has taken the lessons learned and use them with the philosophy that is instilled at Houston North, and as a result, he has become a better president.

After Dr. Wright became president, he went back to his filing cabinet and found that job description he had printed out many years ago. He had a good feeling when looking at the description stating, “Sometimes I feel like we need some type of confirmation that we’re on the right path, and we’re doing what we’re meant to do. That was confirmation for me. The risk and choices I’ve made over the years. They were all worth it.”

Dr. Wright takes great pride in what he does and wants all his students to be successful. The one piece of advice he has for students is, “Don’t just go after a title. Chase a purpose and not a position.” He believes that if you get a position that you’re not meant to be in, then it’s not going to work for you.

When discussing students and success, Dr. Wright mentioned that one of the issues pressing higher education now is equity. “I just hope we continue to understand the impact that it’s going to be on our economy and livelihoods, if we don’t do more to make sure that black and brown students especially are educated.”

Other issues include completion gaps with Black males and funding. Dr. Wright made it known that the current funding model does not match the needs of students. These needs include childcare, food insecurity, mental health, and health care. He stressed how he would love to remove some of these barriers so that students can focus on their education and be successful. He believes that the funding is there, but what they can fund, is the issue. He stated, “We do a lot of fundraising because we can’t spend tax dollar money on those types of services.”

Dr. Wright has done great things in his journey thus far, and he is just getting started. When it comes to his legacy, he hopes that he can change the conversation on how we support and educate students. He wants his college to be the example of what a community college is supposed to be. He wants others to “rethink on how we approach the community and approach students. If that happens, then we can help many more students.”

Dr. Wright is happily married to his wife, Tierra, and they have two beautiful daughters.