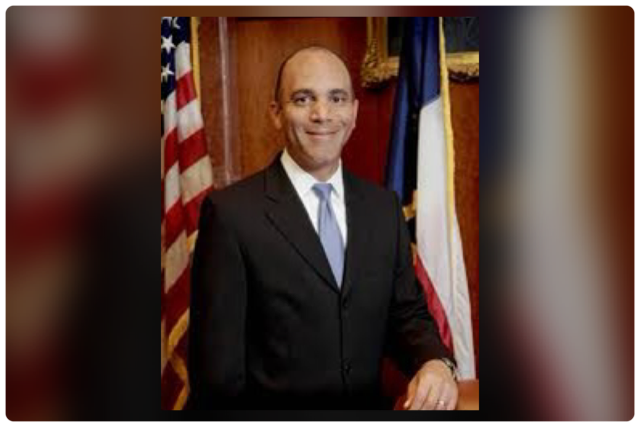 Wallace Bernard Jefferson (born July 22, 1963) is a former — and the first Black — chief justice of the Supreme Court of Texas, who served from 2004 until 2013. In October 2013, he joined the law firm Alexander Dubose & Jefferson LLP as a name partner and now practices appellate law.

He sits on the council of the American Law Institute and became its treasurer in May 2014. A member of the Republican Party, Jefferson was the first African American justice to serve on the Texas Supreme Court, the state’s court of last resort for civil and juvenile appeals.

Jefferson is a graduate of John Jay High School in San Antonio, Texas, the James Madison College at Michigan State University and the University of Texas School of Law.

In November 2002, Jefferson stood for election to retain the position to which he had been appointed, and defeated William E. Moody with 56.76% of the vote. He became, together with Dale Wainwright, one of the two first African American Texans ever elected to that court.

Before Jefferson could complete his new term as associate justice, however, he was again promoted. On September 20, 2004, Governor Rick Perry selected Jefferson to succeed chief justice Thomas R. Phillips, who had resigned from the court a few weeks earlier, after nearly seventeen years as chief.

Jefferson was elected to the position of Chief Justice in November 2006, to serve out the remainder of Phillips’s unexpired term, and was then reelected to a full six-year term. He became the first African American chief justice of that court.

In the 2008 general election contest, Jefferson defeated his Democratic Challenger, Dallas District Court Judge Jim Jordan, with 53% of the vote.

Jefferson resigned in 2013 before his six-year term of office expired. Governor Perry then named long-term associate justice Nathan Hecht of Dallas to succeed Jefferson, and appointed Jeff Brown from Houston to fill the vacancy resulting from Hecht’s promotion to the position of chief.

Jefferson is now in private practice and occasionally appears before his former colleagues on petitions for review, briefs, or for oral argument.

Jefferson was elected to the American Law Institute (the ALI) in 2001, and was elected to the ALI council in 2011. In May 2014, he was named treasurer of ALI. He also serves as an adviser on the Restatement Third, the law of consumer contracts. Jefferson also chairs the ALI’s regional advisory group, covering Louisiana, Mississippi, Oklahoma and Texas.

During his time on the bench, Jefferson served as president of the Conference of Chief Justices, an association of chief justices from the fifty states and U.S. territories.

In 2013, Jefferson was the recipient of the Texas Exes’ Distinguished Alumnus Award.

Jefferson is a 1981 graduate of John Jay High School in Northside ISD school district in San Antonio, which paid tribute to his success and rise from humble roots by naming Wallace B. Jefferson Middle School in his honor. The school opened August 27, 2007 and refers to the former jurist as “our namesake.”