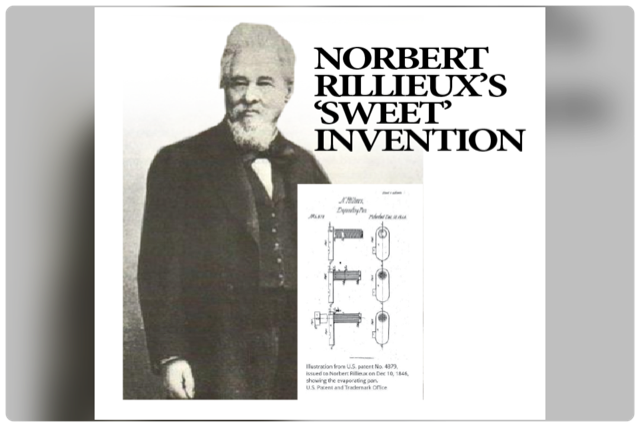 The next time you use sugar or taste something sweet - and that is about every day -- you might want to know that a BLACK MAN once considered the most sought after chemist and engineer in Louisiana, is responsible for perfecting the way sugar was processed.
Spread the love

The next time you use sugar or taste something sweet – and that is about every day — you might want to know that a BLACK MAN once considered the most sought after chemist and engineer in Louisiana, is responsible for perfecting the way sugar was processed.

The birth record on file in New Orleans City Hall lists him as a “quadroon libre” meaning “Mixed-race” and natural son of Vincent Rillieux and Constance Vivant.

Vincent Rillieux was an inventor himself who designed a steam-operated press for baling cotton. He appears to have had a long relationship with Constance Vivant, “a free woman of color,” and one of their sons, Norbert, became what is now called a chemical engineer.

As a boy, the precocious Norbert showed an interest in engineering, and his father sent him to France for his education. By the age of 24, Rillieux was an instructor in applied mechanics at the Ecole Centrale in Paris. Around 1830, Rillieux published a series of papers on steam engines and steam power.

While in France, Rillieux began working on the multiple effect evaporator. As George Meade, a sugar expert, wrote in 1946: “The great scientific contribution which Rillieux made was in his recognition of the steam economies which can be effected by repeated use of the latent heat in the steam and vapors.”

What Rillieux did, and what became the basis for all modern industrial evaporation, was to harness the energy of vapors rising from the boiling sugar cane syrup and pass those vapors through several chambers, leaving in the end sugar crystals.

Rillieux’s evaporator was a safer, cheaper, and more efficient way of evaporating sugar cane juice than the method then in use, the Jamaica train. In this system, teams of slaves ladled boiling sugar juice from one open kettle to another. The resulting sugar tended to be of low quality since the heat in the kettles could not be regulated, and much sugar was lost in the process of transferring juice from kettle to kettle.

Some Louisiana sugar planters quickly understood the significance of Rillieux’s invention, and he returned to New Orleans in the early 1830s, years that coincided with a sugar boom. Rillieux tinkered with his invention over the next decade, and in 1843 he was hired to install an evaporator on Judah Benjamin’s Bellechasse Plantation. Benjamin, a Jewish lawyer who later served as secretary of war in the Confederacy, became Rillieux’s staunchest supporter in Louisiana sugar circles. Benjamin wrote in 1846 that sugar produced with the Rillieux apparatus was superb, the equal of “the best double-refined sugar of our northern refineries.”

The success of his evaporator apparently made Rillieux, according to a contemporary, “the most sought after engineer in Louisiana,” and he acquired a large fortune. But while his invention no doubt enriched sugar planters, Rillieux was still, under the law, “a person of color” who might visit sugar plantations to install his evaporator but who could not sleep in the plantation house. (Nor, for that matter, could a man of Rillieux’s accomplishments be expected to stay in slave quarters. Some planters, it appears, provided Rillieux with a special house with slave servants while he visited as “a consultant.”).

As the Civil War approached, the status of free blacks deteriorated with the imposition of new restrictions on their ability to move about the streets of New Orleans and other draconian laws.

It was about this time that Rillieux moved back to France. Race relations may have played a part in his decision. At one point, Rillieux became incensed when one of his applications for a patent was denied initially because authorities mistakenly believed he was a slave and thus not a citizen of the United States. The declining profitability of the sugar industry in Louisiana also may have been a factor. In any event, in Paris, Rillieux developed a passion for Egypt.

In 1880, a visiting Louisiana sugar planter found Rillieux deciphering hieroglyphics at the Bibliotheque Nationale. Rillieux died in 1894 and was buried in the famed Paris cemetery of Pere Lachaise. His wife, Emily Cuckow, lived comfortably for another 18 years.