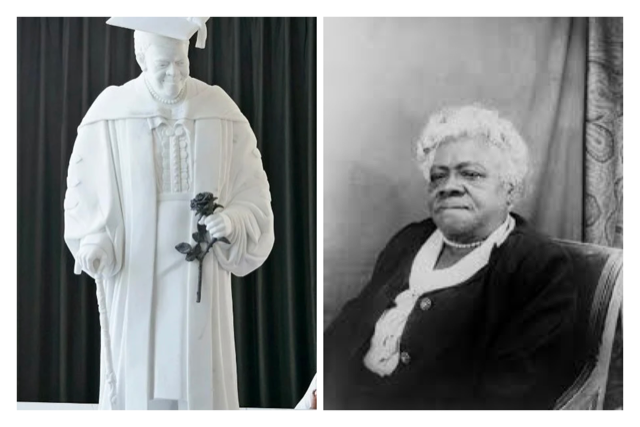 A marble statue of civil rights pioneer Mary McLeod Bethune is replacing one of a Confederate general in the US Capitol’s Statuary Hall, making history as the first African American to have a state-commissioned statue in that particular hall. This is the perfect time to honor Bethune, and educate you about her life’s work in this week’s “Know Your History.”

US Rep. Kathy Castor of Florida said, “Dr. Bethune embodies the very best of the Sunshine State — Floridians and all Americans can take great pride in being represented by the great educator and civil rights icon.”

Who is Mary McLeod Bethune?

Born in Mayesville, South Carolina, to parents who had been slaves, she started working in fields with her family at age five. She took an early interest in becoming educated, and with the help of benefactors, attended college hoping to become a missionary in Africa. She started a school for African-American girls in Daytona Beach, Florida which later merged with a private institute for African-American boys and was known as the Bethune-Cookman School. Bethune maintained high standards and promoted the school with tourists and donors to demonstrate what educated African Americans could do. She was president of the college from 1923 to 1942, and 1946 to 1947. She was one of the few women in the world to serve as a college president at that time.

Bethune founded the National Council for Negro Women in 1935, established the organization’s flagship journal Aframerican Women’s Journal, and resided as president or leader for myriad African American women’s organizations including the National Association for Colored Women and the National Youth Administration’s Negro Division. She also was appointed as a national adviser to president Franklin D. Roosevelt, whom she worked with to create the Federal Council on colored Affairs, also known as the Black Cabinet. She is well known for starting a private school for African-American students in Daytona Beach, Florida; it later continued to develop as Bethune-Cookman University. Bethune was the sole African American woman officially a part of the US delegation that created the United Nations charter, and held a leadership position for the American Women’s Voluntary Services founded by Alice Throckmorton McLean. For her lifetime of activism, she was deemed “acknowledged First Lady of Negro America” by Ebony magazine in July 1949 and was known by the Black Press as the “Female Booker T. Washington.” She was known as “The First Lady of The Struggle” because of her commitment to gain better lives for African Americans.

Bethune was also active in women’s clubs, which were strong civic organizations supporting welfare and other needs, and became a national leader. Bethune wrote prolifically, publishing in National Notes from 1924–1928, Pittsburgh Courier from 1937–1938, Aframerican Women’s Journal from 1940–1949, and Chicago Defender from 1948–1955, among others. After working on the presidential campaign for Franklin D. Roosevelt in 1932, she was invited as a member of his “Black Cabinet.” She advised him on concerns of African Americans and helped share Roosevelt’s message and achievements with blacks, who had historically been Republican voters since the Civil War. At the time, blacks had been largely disenfranchised in the South since the turn of the century, so she spoke to black voters across the North. Upon her death, columnist Louis E. Martin said, “She gave out faith and hope as if they were pills and she some sort of doctor.”

Protecting our ‘Crown and Glory’
What Is Racial Identity?
Comment