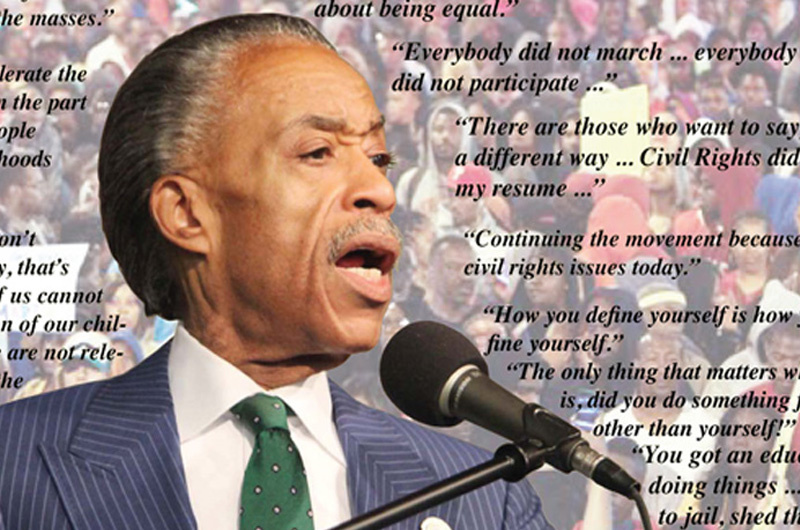 Rev. Sharpton is currently the host of a daily television show on MSNBC that analyzes the top political and social news and features the country’s leading newsmakers.  ”Politics Nation” with Rev. Al Sharpton airs at 6:00 p.m. Monday through Friday.
Spread the love

HOUSTON– The future of the Civil Rights Movement depends on African-Americans sensing the urgency of linking Black history to modern issues affecting race and inequality in America.

“You can talk about heroes an she-roes and the past all day but the challenge is about what we are doing today,” said National Action Network Leader and Founder Al Sharpton. “Some 50 years after the March on Washington, we are still faced with challenges and plenty of us have become so self indulged that we took advantage of the doors that were opened to us and walked through those doors like they were done just for you personally. If people then act the way they do now, we would never have had the advancement we enjoy today.” Sharpton was speaking to about 500 people attending the 2014 Houston Community College Black History Scholarship Gala.

Rev. Sharpton is currently the host of a daily television show on MSNBC that analyzes the top political and social news and features the country’s leading newsmakers.  ”Politics Nation” with Rev. Al Sharpton airs at 6:00 p.m. Monday through Friday. The show is so popular it broke MSNBC ratings history with the highest viewership of any show at 6:00 p.m. since the network’s inception. He also hosts a nationally syndicated radio show “Keepin it Real” that is heard daily all over the country as well as two weekend radio shows that air in markets within the U.S. and is the author of The Rejected Stone: Al Sharpton and the Path to American Leadership.

The activist and civil rights giant has even been praised by President Barack Obama as “the voice of the voiceless and a champion for the downtrodden.”

While reviewing the tapestry of triumphs in Black history at the gala, Sharpton also was quick to remind African-Americans of the new dangers faced today that threaten to hinder and derail progress.

Inequality is the Issue

Once Blacks understand the present civil rights landscape, they must respond to fight the battle of inequality.

“It was never about being better, it was about being equal,” he said. “Until we have a nation you have equal protection under the law and equal opportunity we are not where we need to be.”

Some of the issues Black face that are a huge obstacle to full equality include how desegregation practices have created greater imbalance and had a negative impact on schools, teachers and education. Another issue is the struggle to vote. Some states are making laws to suppress voting rights and others have laws requiring photo identification to cast ballots.

The imbalance and inequality surrounding the “Stand Your Ground” laws in states that have been deadly to Blacks or convicts Blacks for standing their ground and allow Whites to kill, get away with murder or escape with lesser charges.

Blacks also are continuing to battle inequality when it comes to pay, employment and going after home, bank and business loans.

“We have gone from Jim Crow to James Crow Jr. esquire – a little for slicker and educated but at end of the day you end up at the same place…Unequal,” he said. “Things may be better, but still not equal…”

We Have Not Arrived Yet

He described inequality in America as a plane ride involving turbulence.

“An air plane ride with turbulence in air with bad weather makes the plane rock. You may get through the plane rocking and turbulence, but you still on plane,” Sharpton said. “We just got through the storm, but we had not arrived anywhere … you still on plane. Too many people think the turbulence is over, but  as long as we not equal we have not arrived in this country … we all have an obligation to continue the fight.”

He pointed out the complacency of Black education and business leaders who appear to be inconvenienced and uneasy about civil rights issues and involvement and have allowed the controversial issues to slide to the back burner in favor of enjoying good paying jobs and more lavish lifestyles.

“Do you realize folks died so that you could get your degree,” he said. “You didn’t just get that education because someone just put you there in that spot. You got an education because people were doing things … they laid their lives down, went to jail and shed their blood to open doors that you can go through doors where they could not go.”

The challenge to the great audience of affluent Blacks was to do an honest personal self assessment of where they fit into Black history in Houston and America and chided the group for thinking more highly of themselves than they ought to think.

We act like we doing someone a favor…we forget we are recipients of favors ourselves.”

Understand the Fundamentals of the Movement

He was quick to point out that the first Civil Rights leaders unselfishly served the masses without regard for the risks or the losses because of standing up for the right.

Without Martin Luther King jr., Fannie Lou Hamer or Rosa Parks and others, the movement would still be dead in the water with little to no progress.

“We see if we can fit it in our schedules,” he said. “Suppose Fannie Lou Hamer, Rosa Parks or Dr. King couldn’t fit us in their schedules. You and I would still be locked in the same situations we faced (as a people) for so many years.”

Hamer was beaten and mistreated for her role in registering voters in Mississippi. Parks was arrested for not moving to the back of the bus in Montgomery. King was arrested numerous times for his nonviolent protests and actions and eventually killed in Memphis for fighting inequality.

He warned of the need to beware of dangerous “Safe Negroes” who are too scared of the real struggle and shun it thinking progress came without the benefit of pain, sacrifice and the civil rights movement.

These are they who contend their gains were made doing it a different way and not by civil rights. They cling to the notion that it was going to best schools, being in right fraternity and having right connections and following the “rules” that made all the difference.

To that Sharpton scoffed. “You were not the first qualified Negro in America.Your qualifications were not under consideration until some sacrificed like many uneducated, illiterate grandmother that laid down in front of biting dogs and cold water and fire hoses for you… Civil Rights made someone read your resume’”

Clean up Our Own House

Black on Black crime and drug use and gang violence is running rampant. One cannot win the civil rights battle and secure the future if we constantly allow the destruction of our most precious natural resource – Our children.

“The reason that many of our children don’t know our history,” he said. “It is because many of us cannot gain the attention of our children because we are not relevant to them in the present.”

Sharpton added that youth do not respect some adults because they have a double standard of proven hypocrisy that is evident when they are not willing to stand up for truth or be counted on key issues important to Black America and their own futures.

He also said youth need a united message from the parents of this generation that they must stop wasting their opportunities and realize the high price that was paid for their freedom and civil rights… and lay aside the drugs and foolish things that delay and postpone success and curtail the development and progress of the movement.

He said you can’t expect children to grow up and be somebody if they are growing up in a negative culture, using the N-word, belittles women and promotes lyrics that tell youth they are no body.

“How you define yourself is how you confine yourself,”he said. “We need to teach children the way we were taught, expect success and expect them to be responsible.”

According to Sharpton, not all Blacks marched or stood with the early movement. It took some good Whites and Jews to sacrifice when safe Negroes were afraid to take the risks.

“Not all Black folk were on board,” he said. “We must set record straight and be not mistaken. …Everybody did not march…Everybody did not participate…It was the few committed that carried the torch for the masses.”

In the end, the victory over injustice and inequality lies with those who stand up and fight with true faith knowing that victory is ours and that you fought the good fight and helped move things forward toward equality for all.

“This is important not for young people being helped, but for the older people that helped them… you will be measured by whether you grow into doing something to help them do something,” he said. “The only thing that matters when you gone is did you do something that mattered for someone other than yourself.”