HOUSTON – While at a resale shop in 1989, Marilyn Bolden Grant of KTSU (90.9 FM) found an album she fell in love with. She began playing the song on air every Sunday morning at 10a.m. Fast forward three decades later, and Dr. Darrell L. Rushing’s, “I Owe it All to God” has proven to be a song which has transcended the times.
Today, if you were to search, “I Owe it All to God” on YouTube; you will find a posting by Carl Lewis. His tagline reads, “I Owe it All to God, by Darrell L. Rushing. Every Sunday morning at 10am on the Marylin Bolden Tyrone gospel show on KTSU. Best memories of riding through Third Ward to church with my Dad!” A few of the comments below the song read: “Omg, We listened to this on KTSU every Sunday on the way to NW Community BC. I was in my teens, but it got me in the right frame of mind for church!” (Amber Luv); “LMBO every Sunday @ 10am… That’s how you knew you were late to church!!” (Keisha Rochelle) and “I spent many years singing under Dr. Rushing’s impeccable tutelage. I consider him a dear friend, but if he NEVAH WRITES ANOTHER WORD OR NOTE OF MUSIC THIS SONG RIGHT HERE SAYS IT ALL FOR ME!!!!” (Faye Melancon).
This year, the 2009 Grammy-nominated song “I Owe It All”, was submitted to the Guinness Book of World Records – as one the longest consecutively played gospel songs in national radio history. But that is just one feat attributed to the talented gospel music icon, who started playing the piano with no formal training. For half a century, Dr. Darrell L. Rushing has been on the scene composing, producing, publishing and copywriting some of the best in gospel music.
The Forming of a Gospel Music Legend
Darrell L. Rushing is the only son born to Dexter and Devora Rushing. Raised in Houston’s Fifth Ward, he was educated in the public-school system attending, Nat Q. Henderson Elementary, McReynolds Middle School and ultimately graduating from Phillis Wheatley High School in 1974.
At an early age, Rushing became enthralled with the sound of gospel music as he would listen to the late Dr. Gideon Sanders, “tickle the keys” at Fifth Ward Missionary Baptist Church. Rushing said, “Gideon was a well-known musician back in the day. I remember going to church hearing him play Amazing Grace and that was just all she wrote; when he got through playing, there was no one left in the church.”
Inspired by his experience, Rushing would often play on the piano while visiting his aunt, Angie Williams house on the weekends and during the summer. Back then, he had cousins who took music lessons and he would watch them and imitate what he heard them playing. It was Aunt Angie who first recognized the gift brewing inside him and shared the insight with his mother. By the time Rushing reached the age of 13, he could not deny the underlying passion within. As such, he went to aunt’s house and sorted through a cluttered garage to get to her piano. Having never played a complete song before, he began practicing and mastered, Pass Me Not O’ Gentle Savior.
A couple years later, he went to visit his grandmother, Essie Rushing in Minden, Louisiana. While there he attended her church, where he met Sis. Gatha Smith, who begin teaching him some of the basic fundamentals of music. Before the end of summer, Rushing had experienced his first round playing an organ. His first song was, “Kept On Searching Til I Found Him.”

Shortly thereafter, while in the barbershop his mother approached Pastor Ira Bostic, who happened to be in the barbershop with them. She informed him that her son was a musician. Rushing said, “I was embarrassed, because I didn’t think I played well enough to play for a church.” Nevertheless, Pastor Bostic extended the invitation for him to come and play at his church, Bethel Missionary Baptist Church. In doing so, Rushing was trained on more fundamentals of playing gospel music by Sis. White. From there, he started earning $10 a Sunday, of which he would give $5 to his mother and keep $5 for himself.
By the time he reached the age of 17, he had begun playing for New Commandment Missionary Baptist Church, under the leadership of the late Pastor David Foster, Sr… During this season, he met Evangelist Brenda Harland, who would later prove to be one of his dearest friends, mentors and encouragers. She took him under her wings and nurtured and trained him in the spirit of gospel music.
When Rushing graduated high school in 1974, he wasn’t quite sure of the career path he would take. However, his Aunt Angie quickly helped him to decide. She picked him up one day and dropped him off in Third Ward on the corner of Cleburne and Ennis Streets and drove off. Left to fend for himself, he encountered a young lady who happened to be a Nutrition and Dietetics major at Texas Southern University.
As it was, Rushing had long developed a love for cooking – stemming from his many hours spent at the local Barbeque shack in Fifth Ward that his mother worked at. Therefore, he enrolled at Texas Southern University and began studying Dietetics. In the process, he found himself spending countless hours at the campus’ School of Music. While there, he crossed paths with many great gospel artists of that time.
Over time, Rushing continued to perfect his talents. Eventually, he met Minister Phyllis Kennedy, who was a musician at Community Baptist Church. Rushing was still at New Commandment MBC and together the two of them established a community choir, New Children of Christ (NCC). The group became an awesome wonder – producing many of Houston’s present-day gospel artists, like Kathy Taylor-Brown.
As Rushing continued to expand his horizons, he developed a reputation for his outstanding ability to prepare numerous local choirs for service in the gospel music ministry. In 1982, he was meticulously selected to record professionally with the renowned, late Rev. James Cleveland, president and founder of the Gospel Music Workshop of America (G.M.W.A.). With that, Rushing began recording gospel music around the nation in states such as: Detroit, Utah, Missouri and Louisiana. He also served as assistant Dean of Workshop of the Texas Mass Choir – an organization composed of several chapters of the G.M.W.A…
In the late 80’s, Rushing became Minister of Music at Galilee MBC under the direction of Dr. Edwin A. Davis. While there, he had two live recordings with Gospel Music Awareness Mass Choir, with some of Houston’s greatest gospel singers like, the late Polly Smith and Jessie Harrison, Jr… Rushing would go on to make many other remarkable strides and accomplishments in the gospel music industry. But, despite all the success he has seen, he still remains humble in all of his endeavors.
“I Owe it All to God”
Aside from his successful gospel music ministry, Rushing possesses a bachelor’s degree from Texas Southern University and a Doctorate Degree in Sacred Music from Christian Bible Institution and Seminary. Today, he serves as the Laboratory Coordinator for Prairie View A&M College of Nursing. Amidst working a full-time job and faithfully serving in music ministry, he is the CEO of three entities: Rush-In Consultants – a consultation firm for non-profit organizations that are trying to secure 501(c)(3) status; D-VOTED LIVING Inc. – a nonprofit which assists with housing for disabled veterans and Delicacies by Darrell, a local catering company. He serves as the Minister of Music at the historical St. Luke Missionary Baptist Church, under the leadership of Pastor Mark C. Davis. Additionally, he is the proud father of one son, Darrell and a grandson Darien.
Throughout his career, Rushing has produced and recorded three albums and three CD’s. Just last year, he composed a compassionate music video dedicated to victims of Hurricane Harvey entitled, “I Don’t Look Like the Strom That I’ve Been Through.” The video is featured on YouTube. Tentatively, he is planning to release a new cd very soon.

Due to his invaluable knowledge and experience in songwriting, producing, music publishing and copywriting, he has received numerous honors and awards. A few of them include: the “Gospel Music Legends Award”, at the Houston Gospel’s Legends Gala, presented by The Gospel Music Workshop of America-Houston (2009); the “Living Legends Award” by the Announcers Guild of the Gospel Music Workshop of America (2011); the “Houston’s Great Gospel Music Legends Award” presented by the Gospel Music Workshop of America-Houston (2011) and the Texas 50 Top Black Entrepreneurs in the Gospel Music Field Award, by D-Mars (2019), just to list a few.
The Transformation of Gospel Music
When asked about the transformation of gospel music Rushing revealed the following. “The music has transitioned since when I started. It has changed from traditional to kind of urban and then the contemporary gospel. I’ve witnessed the change throughout the years. Now, when I first started, John P. Kee and myself started out together in that arena under the leadership of Rev. James Cleveland. Then, Kirk Franklin come on and we were there, and saw Kirk doing some of the things that kind of changed the gospel flavor – because a lot of young people were getting off into gospel. And I saw the change, but the traditional will always be here. Amazing Grace is my testimony and that’s pretty much what I have seen change. It’s not the same but as long as there is a message in the song that’s all that matter. If they are touched through Kirk, Fred Hammond and Fantasia – it’s ok, as long as they are witnessing the goodness of God. It’s about the message!”
Mentors & Motivations
Over the years, Rushing revealed that he has had several individuals who played a major role in influencing his success. He said, “Gatha Smith in Minden, first gave me the opportunity and saw something in me that others didn’t, and she nurtured it. There was also a Deacon at Bethel, the first church I played for. He said, ‘Brother Rushing, you stick with us and your music. Right now, you’re in the minor leagues; but keep on doing what you doing and one day you going to be in the major leagues. At the time, I had no time what he was talking – I ain’t never been no fan of baseball. But now I see.”
He continued on to say, “Then there is Brenda Harland, who took me in when other people wouldn’t let me play. They would close the organ on me; but she saw something in me. She has been there for me and has been my mentor since I was 17. She is a true woman of God. Also, my godmother, Mrs. Rachel Jones was an inspiration in my life.”

Finally, he said “I was blessed to have a very supportive radio announcer, Marilyn Bolton Grant for the past 30-years and I Owe it All to God…”
Paying it Forward
“I have mentored so many, I can honestly sit back and say they my children.”
Today, Rushing continues to nurture upcoming and aspiring artists in the business of gospel music. He said, “It is my desire to serve as catalyst for the upcoming musicians. Because it’s not the way it used to be back in the day. It’s more commercial. So, I explain to them the pros and cons. But I am very proud of people like Kathy Taylor and Eric Carrington – people that I had a part in helping to shape and mold their gospel careers. To God be the glory!” 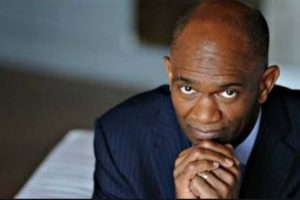 The right way is the only way

The right way is the only way