Does the name “Provost” sound familiar? It certainly should. Provost is synonymous with volunteerism, service and mentoring -all simultaneously.

The name Provost is about to become a lot more familiar. Why? I thought you’d never asked. Georgia Provost, who most know as “Mama Pro,” and her son Jerome Provost are running for seats on Houston City Council.

Georgia, who is running for City Council, Position 1, amazed over 81,000 votes in a run for City Council in 2015. Endorsed by the Houston Chronicle then as, “an individual who brings grass roots awareness and years of experience helping solve problems in her community.” The Chronicle statement added that “Georgia’s qualifications will prove valuable on the council. “She will speak up for Houstonians too often ignored by city government,” the Chronicle endorsement further stated.

Imagine, if you will, how much stronger Georgia’s voice will be with a seat at the city council table.

Jerome Provost has his heart, sight and mind set on improving the community where he lives, works and where children play. He has walked, talked and worked with community businesses and individuals in the community his entire life and he knows their needs, issues and concerns.

Jerome is not just committed to hearing his constituents. He is committed to addressing their needs, among which are to change the trajectory of District D by pulling investment toward the District for ALL residents to benefit, to bring innovation and creativity to city hall and blight control.

Jerome, who grew up with a successful businessman father (Herbert) and an activist mother (Georgia) has witnessed first hand changes in his own community.I’m pleased with some of the progress that has been made over the years” Jerome asserts. “Yet there are parts of District D that has stopped growing. I want to work hard to assure the District as a whole grows.”

Georgia’s goal is to achieve what she promises on the campaign trail when elected. ” I want to create a network where neighbors are helping neighbors and where everyone grows. My goal,” she says, “is to bridge the gap in Position 1. I plan to be the change I want to see,” this is a promise she plans on keeping… 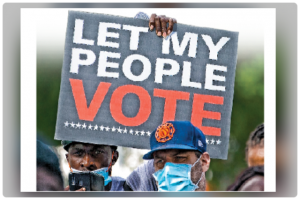