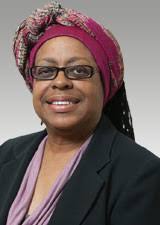 HOUSTON — Marcia Johnson is a true champion of education. Born in North Miami Beach, this wife and mother earned a BS degree in Broadcast Journalism and a law degree from the University of Florida in Gainesville before making her way to Houston.

“We moved to Houston in 1977 after my husband was recruited to Baylor College of Medicine,” Johnson told African-American News&Issues.

Her first local job was at the City of Houston’s Attorney’s Office before she moved on to a law firm, followed by the City of Houston Housing Authority and eventually Texas Southern University’s Thurgood Marshall School of Law, where she’s remained ever since.

“One of the things that was most attractive about TSU was its urban mission. I’ve enjoyed reaching out and being a part of the community, and helping it grow. Ensuring our kids are competitive is primarily the reason I’ve stayed at TSU,” Johnson said. “I’ve had the opportunity to do lots in the community, including creating non-profits, building affordable homes in Third Ward and Sunnyside and working with extraordinary people. I’ve had an exciting, happy and rewarding life here.”

Johnson has served as a TMSL faculty member since August 1991. In 1992, she founded the Earl Carl Institute for Legal and Social Policy, Inc., a non-profit think tank for the Thurgood Marshall School of Law. She directed the institute for 20 years. Johnson has also served in administrative capacities at the law school including interim assistant dean and interim dean.

Johnson has spent much of her adult life in public service and has served in numerous capacities at the national, state, and local levels.

During her tenure at TMSL, Johnson has authored and or co-authored case books and articles, position papers and other publications including the Our Story book on the history and legacy of Texas Southern University’s presidents from the institution’s founding to 2008.

Johnson served as director of TSU’s Urban Research and Resource Center until October 2019 and is now a professor law at TMSL.

Johnson is married to Dr. Luckett Johnson and has three sons: Jules Evan Johnson, Vincent Alan Johnson and Luckett Anthony Johnson. She is also the proud grandmother of six.