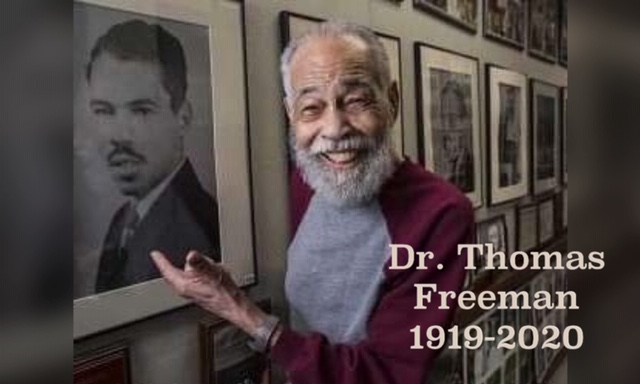 “Iconic to say the least. We were so blessed to have him for more than 70 years influencing the minds of students, and adults, at TSU.  I personally am thankful to have had the opportunity to meet him,” TSU Interim President Kenneth Huewitt said.

He touched so many lives and former students thought of him as more than a professor, he was a father figure.

“Dr. Freeman created a home for us. We never had to fight for computers in the computer lab, we never had to find a place to study or find a place to rehearse. He made sure the debate office was open and available to us seven days a week.  Dr. Freeman taught us to have pride in our work. He made it clear that we compete and win to bring prestige to out university. He gave us a family,” said Antréchelle Dorsey, TSU Debate Team President (2017-2018 & 2018-2019). “He taught us how to eat together, win together and to stand together. I am forever grateful for the example of servant leadership that Dr. Freeman has shown me. Dr. Freeman also taught us how to present ourselves in a manner that epitomizes not only what he stood for, but what all the great men and women who came before us stood for : Excellence in Achievement. He’s had an immeasurable impact on my life, and I am FOREVER grateful.”

As noted on TSU’s website, when Academy Award winner Denzel Washington was preparing for one of his major performances – as a debate coach – he needed the help of a master in this specialty. After a search for what he called the best debate coach “in the world,” he selected Dr. Freeman. Under Freeman’s guidance, Washington and his creative team produced one of the actor’s most exhilarating movie masterpieces, “The Great Debaters.”

In 2009, following the recommendation of TSU President John M. Rudley, the TSU Board of Regents named one of the university’s newest academic unit the Thomas F. Freeman Honors College. The university believes Dr. Freeman’s legacy will inspire scholars in the Honors College, students in the University, and leaders in the nation and the world.