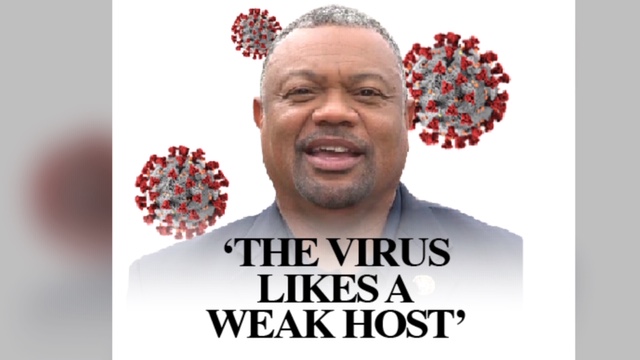 HOUSTON – H-E-B Vice President of Operations Terry Williams had double pneumonia, was extremely tired and hallucinating from drugs and fever when his father came into his room and told him two simple words, “Get up.”
And just like any obedient son, he did. Williams heeded his father’s words and he started walking around his room, determined to not die from Coronavirus/ COVID-19.

If it wasn’t for his father, who was also a fellow “Que-Dog” as they were both Omega Psi Phi Fraternity “bruhs,” he believes he would not have made it.

“My best friend, who was my dad, came and visited me, he said ‘get up and keep going, you can do this,'” Williams shared.

But there’s just one thing to mention; his father has been dead for two decades.

“He’d been dead for 20 years and told me to get up and before I knew it, I was up walking around the room. I looked back at him, I didn’t know if I was hallucinating or not, but it looked real, then he was gone. Every day after that, I would get 10 percent better,” Williams said.

It is commonly said in the black community that when a person is close to death, our dearly departed loved ones come to us to hold our hand. They are either coming to escort us to the other side, or they tell us it is not yet our time to go. Williams’ father was telling his son that he would see him later and that he still had work to do. So, Williams got busy.

“If he (dad) would have said ‘Come with me,’ my soul would have left my body, and every time I talk about that, it gives me chill bumps,” he said.

Williams’ fight was a tough one. He contracted the virus either at the end of February or early March, at a time when no one was wearing masks and there was a shortage of ventilators and respirators.

He went to the emergency room after experiencing a laundry list of symptoms including diarrhea, vomiting, loss of appetite, loss of taste (everything tasted like salt or metal), shortness of breath and fatigue. He remained at a local emergency room for about six hours before they sent him home. Pneumonia was verified, but it was too risky to admit him because the Intensive Care Unit was filled with COVID patients. Two days later, a deputy constable showed up at his door for a welfare check because he was not answering his phone and informed him that he had contracted the deadly disease.

“I had the most severe case. I had double pneumonia with COVID-19. The people like me, 80 percent of them were dying because they put them on a respirator. I had just read about not going on a respirator, so I refused to go on one and that saved my life,” Williams said. “I was on two or three different inhalers because COVID likes a weak host. A lot of people don’t know that, but when you go on that ventilator, your body relaxes and COVID can attack all your organs until it kills you. Even as I was working hard to just try to breathe, my body was working. I wasn’t the weak host that COVID likes, I was fighting for my life. You have to be moving, you can’t be stationary.”

More is known about COVID and more people are surviving now. Health care physicians are not putting as many patients on the respirators, they are instructing them to sleep on their stomachs and other helpful information.

Williams has made a full recovery.

“My recovery took about six weeks and not only am I testing negative now, but I have the antibody. My doctor was excited to tell me I was his first patient with the antibody. I can’t get it again, nor can I give it to anyone,” he said. “I trust what he says but that is with this strand. They are saying another one will come, and we don’t know what can happen with that. I still wear my masks in public and practice safety measures.”

Williams said his doctor also told him that he is healthier now than he was before. He’s lost 30 pounds, is no longer borderline diabetic and has a renewed sense of faith, family and community. And of course, he has his beloved father forever watching his back.

His final advice to everyone: “Stay active, move your arms, move your legs, force yourself to eat even if you don’t like it or can’t taste it. Always remember, COVID likes a weak host. Stay strong!”