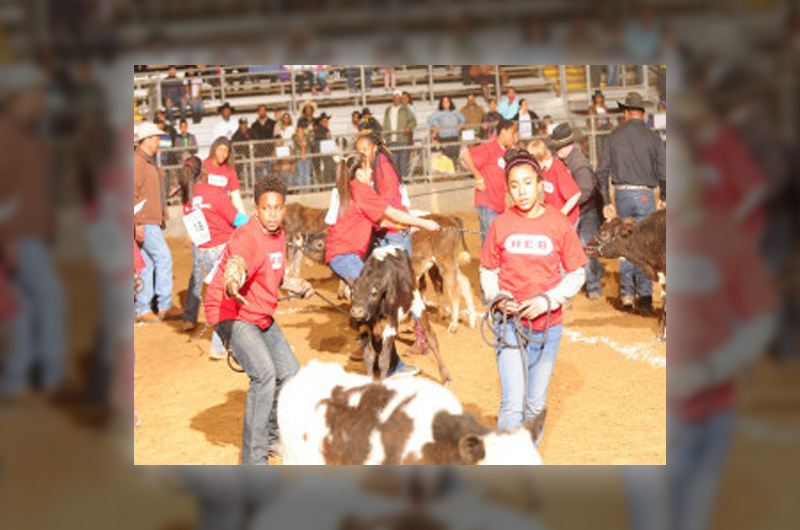 The 16th Annual Heritage Day Rodeo, hosted by BPCCA, turned out to be successful with the help of Black cowboys and cowgirls, spectators, and with the sponsorship of H-E-B and Silver Eagle Distributors.
Spread the love

HUMBLE – Black cowboys have been widely recognized through literature, television, and through events such as the modern-day rodeos. The Black Professional Cowboys and Cowgirls Association, Inc. (BPCCA) put on multiple events at the Humble Civic Center for this year’s rodeo in order to honor those Black cowboys that have paved the way for present African-Americans that continue to love and display these historic and exciting traditions.

The 16th Annual Heritage Day Rodeo, hosted by BPCCA, turned out to be successful with the help of Black cowboys and cowgirls, spectators, and with the sponsorship of H-E-B and Silver Eagle Distributors. These sponsorships help by contributing to the youth through scholarships that help fund their college education. The BPCCA’s mission is “supporting education,” and their purpose is to “create awareness and recognition for African-American men and women who have made significant contributions in the African-American community.”

Their goal is to “maintain a college scholarship fund through various fundraising activities” in order for high school graduates to attend four-year universities. So far, BPCCA (with the help of sponsors) has provided 132 scholarships for high school seniors. They have given $100,000 in excess. Their vision is to “host the largest African-American civic event in the Houston, Texas area.” The events help to ultimately highlight the culture and traditions of Black cowboys and cowgirls.

Dwight Judge, the founder of BPCCA, stated that “Heritage Day is an opportunity for families and friends to come together to renew and build relationships.” Judge feels that “Rodeo is very important to the Black community, because many years ago, this was the only sport that they were able to participate in and it became a family event on Sunday afternoons where the entire family would go out and enjoy watching family members or themselves compete, so it has a long history of bringing families together.”

Judge said that his rodeo days started many years ago when somebody mentioned that they wanted him to host rodeos out of the state. “My brothers and I had a small amateur rodeo in Barrett, Texas, and a guy from New York recruited me to come and do a rodeo in Harlem, and I would take cowboys and cowgirls and staff from here, and we would go there, and for 18 years we produced rodeos in New York City and each of the boroughs… After retiring from the New York series, I wanted to do something here in Houston that would galvanize the Black community as it did in the late 50s and 60s and make an outing for the African-American families,” he said.

“In addition to that, I wanted to provide an opportunity for graduating high school seniors to receive scholarships, so really and truly, I want to be known as the guy that believes in education, not just the rodeo guy, because I understand what helped me endure 35 years of corporate America was education, not rodeo. I was able to combine the two and enjoy the sport that I love, but also create an opportunity for kids to qualify scholarships to help them in their pursuit of going to college,” he further explained.

The Black cowboy was one of adventure, survival, and natural ability. Many slaves brought into the United States came from countries such as Ghana and Gambia. These countries were widely known for herding cattle. Slave herders were very intrigued by the cattle herders and eventually picked up many techniques from their slaves.

Throughout several parts of the Deep South, slaves used their skills on plantations that raised cattle. Most slaves used salt, bullwhips and dogs to manage cattle. After the Civil War, former slaves became cowboys that worked to move the cattle along different trails.

Many Black cowboys rode out of Texas along Goodnight-Loving, Chisholm, and the Western and other trails in cattle drives to North and South Dakota, Colorado, Kansas and Wyoming. They would on average take approximately three months to reach their final destination.

Of 35,000 cowboys between 1886 and 1896, approximately 5,000 to 8,000 of those cowboys were Black. Although much racism still existed, many cowboys, whether they were Black, White, or Red, stuck together as a result of the hard times and change of lifestyle awaiting them.

Heritage Day consists of the actual Black Heritage Rodeo that show actual cowboys and cowgirls competing in categories such as bull riding, calf roping, women barrel racing, and bull riding, concerts that celebrate and embrace Zydeco music that contains that sounds that root from Creole, Cajun, and Blues origins, and the exposition, which includes art, games, rides, and a kid zone for children to enjoy. Sheep riding and calf scrambling allows the younger population to grasp a slight idea of what it was like to be a cowboy. Zino’s Desserts provided pies, cookies and cakes while Frenchy’s provided their famous fried chicken. Corey LaDay also provided his signature barbeque and Big Lee’s sold fish and shrimp to guests.

James E. Harris, the Director of Supplier Diversity for H-E-B, stated that “H-E-B is a sponsor due to the implementation of giving away scholarships and because of what the BPCCA rodeo means to the Black culture. “It’s really a celebration of what African-Americans have meant to shaping the landscape of Texas by way of Black cowboys,” he said.

According to Harris, the relationship between BPCCA and H-E-B was cultivated when “Dwight Judge had a meeting with H-E-B 10 plus years ago.” He went on to say that Judge “painted a vision of where he wanted the organization to grow to, and it was seeded in providing scholarships for youth to go to college. That was the genesis for the program. The vehicle he provided was the rodeo, and at that time it was done through the February timeframe, which was Heritage Month. It used to be hosted at the Houston Farm and Ranch Club. It outgrew that facility, so that’s why it’s hosted in Humble.”

“I think it’s important for us to remember our history, to embrace it, and it’s not just about remembering history, but what are we doing to shape the future of African-Americans and Texas going forward? We do that by understanding our history by celebrating it, embracing it, and really planting a seed for the youth, so most of the proceeds for this event goes toward scholarships for high school students looking to enter four year universities in the upcoming year,” he further stated.

Harris believes that sponsorship for the BPCCA rodeo is important to it’s existence.“What I’d like to see is more companies to come on board to be a sponsor and sew a seed in the future of Houston’s youth, because these scholarships are for youth attending college, so my request would be more and more organizations to embrace, engage, and support the organization so they can make a difference in the lives of the youth in the state of Texas, specifically Houston,” he said.

Approving Texas Open Carry Approves More Open Season on Blacks
An Activist That Fights For Us!: Quanell X Stands for The Future of African-Americans
Comment