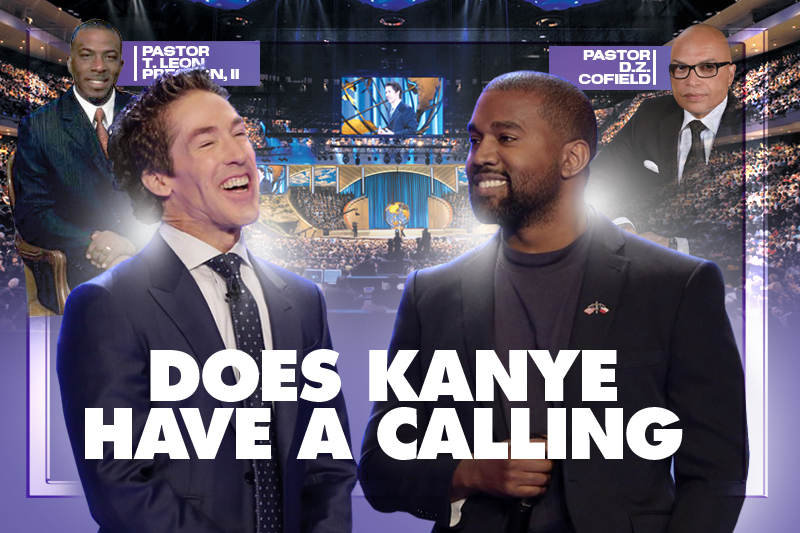 In 2004, he burst onto the scene as the ‘College Dropout’ letting the world know that “Jesus Walks” with them. For that one song, three separate videos were released and debuted at a TriBeCa screening; giving the world a sneak peek into the mind of a man whom we would soon learn has as many sides as he has monikers: Kanye, Ye, Yeezy, Yeezus and his newly-proclaimed “Christian Genius Billionaire.”
Spread the love

HOUSTON– In 2004, he burst onto the scene as the ‘College Dropout’ letting the world know that “Jesus Walks” with them. For that one song, three separate videos were released and debuted at a TriBeCa screening; giving the world a sneak peek into the mind of a man whom we would soon learn has as many sides as he has monikers: Kanye, Ye, Yeezy, Yeezus and his newly-proclaimed “Christian Genius Billionaire.”

The moving, unapologetic message belted out by the rapper and his hip hop choir, gave credence to the line in the chart-topping song, demanding “somebody tell these niggas who Kanye West is.”

And who he is— is an unpredictable, outspoken, controversial, award show interrupting entertainer now married to arguably the world’s most famous Instagram and reality star- turned innocence project advocate and activist — Kim Kardashian West.

In a strange art imitating life kind of way, the Jesus Walks videos 15 years ago seem to be eery premonitions of his present-day moves.

Version one of the video trinity depicted a skid row drunk, an L.A. gang banger and a prostitute each running away from their current “walks of life” and winding up simultaneously seeking repentance at the pulpit of a church where a rapping Kanye preacher awaited them.

Now in 2019, West and his choir have re-emerged, most recently on the stage at Pastor Joel Osteen’s Lakewood Church in Houston, one of the nation’s richest and most powerful mega churches. This time, though, there are as many skeptics as there are fans, wondering if West has, indeed, had a calling?

Some say it is merely a publicity stunt and that West, who is known for his shameless attention seeking antics, is just doing it for a mixture of album promotion and/or politics, while others say, “the doors of the church are open,” and judge not, lest ye be judged. Matthew 7:1.

African American News and Issues reached out to some of Houston’s Black pastors to share their thoughts.

And for West, who recently released “Jesus is King,” is this making him a hot seller again after, in 2016, he was forced to cancel nearly two dozen dates on his Saint Pablo tour after reportedly suffering a mental breakdown? According to Bloomberg, West sacrificed roughly $30M in ticket sales from the halted tour.

“The stage is there; the accommodation is there; and the seating is there. You must remember, it used to be a basketball stadium,” Preston explained. “You already have a captivated audience. Now you can jump start from the largest church in the nation.”

So who benefited the most? West or Osteen?

“You want me to throw you a curve ball?” Preston asked. “Trump benefited. I’m more inclined that this was an introduction to a political movement. Let the wheat and the tares grow together, and in the end, He will do the separation. The wheat is the good, the tares are the bad and it is up to God to separate them. What doesn’t come out in the wash, will definitely come out in the rinse.”

Despite his uncertainty on West’s agenda, Preston wanted to make two things clear.

“One. We never want to paint the picture that any of the Black pastors are anti-Joel Osteen or Lakewood Church,” he said. “Two, I have attended the Lakewood Church on a few occasions for their regular church, but will Joel EVER attend mine on ONE occasion? What meeting did Kanye West have with the Black church pastors and leaders to simply say that he was even bringing this production here or what its vision was for Houston?”

“My understanding was that Joel Osteen reached out and invited Kanye and I think Pastor Osteen should be commended for it. My mother told me ‘don’t go anywhere you haven’t been invited,’ so I don’t know if Kanye was even invited by another church in Houston of any race,” Cofield said.

“The other thing that we’ve missed is him not just visiting Lakewood, but of him ministering and performing at the Harris County Jail. When I heard that, it reminded me of Matthew 25 when Jesus talks about ‘me being in prison and ye visiting me not.’ The idea that when we have an opportunity to go and serve and we do it; that’s a tremendous testimony, so I wish him the best,” Cofield expressed. “We are never in the position to judge. The truth is, judgment is above our pay scale.”

Version two of Jesus Walks video shows Black men in a prison chain gang slaving in the fields and a KKK terrorist burning a cross.

Cofield went on to say, “a lot of the criticism that Kanye has reminds me of the criticism that the apostle Paul got when he was first converted. The early Christians didn’t believe him, they didn’t trust him because they knew of his reputation and his past, they didn’t believe that he had experienced a true conversion in his present, and so for us to stand in judgment of him and not welcome him, I think reveals more of what’s wrong with us, than of what’s wrong with him.”

Cofield explained that, historically, there has always been moves and shifts that have taken place in worship around music and especially for musicians. He stresses the power is in the words and in the message.

“The gifted and talented have been able to walk in multiple worlds because music is an amoral experience. I think Kanye has demonstrated an ability and a genius in using his gifts now to glorify God for however long he chooses to do that, and so I think we should applaud, welcome and embrace him and do what God has called us to do – to love him.”

Version three of Jesus Walks video takes us along as Kanye the rapper and a White Jesus ride around the ghetto in a Cadillac feeding the hungry, healing the sick and touching lives.

As for the next few versions in real life, we shall all see.