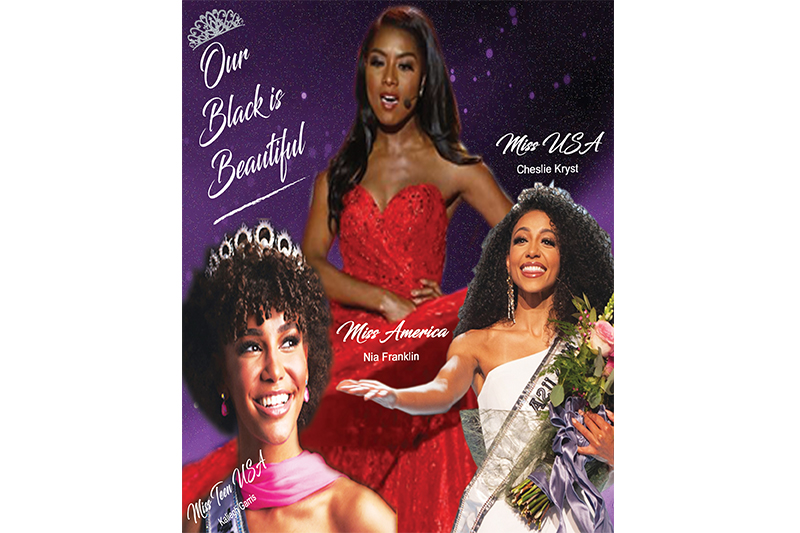 “Well, well, well… It appears America has finally accepted the century-old secret, that scores of slave masters have always known. OUR BLACK IS BEAUTIFUL! Always has been, always will be.” – Rebecca S. Jones

Kaliegh Garris is an outstanding dual-enrolled student at Joseph A. Foran High School and the Educational Center for the Arts where she majors in Theater. She is a competitive dancer who is trained in contemporary, jazz, pointe, hip hop and tap. Of all that she does, she is most passionate about her personal movement, “We Are People 1st,” which she started in honor of her older sister who has multiple disabilities. Kaliegh was also recently recognized for her work by the Department of Disabled Services.

Nia Franklin was born in Winston-Salem, North Carolina and lived in the state through graduate school. She earned an undergraduate degree in composition from East Carolina University and a Master’s degree in Fine Arts from the University of North Carolina School of the Arts.

During Nia’s college freshman year, her father was diagnosed with non-Hodgkin’s lymphoma, and she became his stem cell donor. This experience sparked a turn of events in her life which led her to seek out the Miss America Organization. She says, “I had to find a way to pay for myself to go to school and so I entered the competition.” “It became much more than just the scholarship money for me, it was also about the mentorship, leadership and sisterhood you find in this program,” she added.

Shortly after Nia’s graduation from the North Carolina School of the Arts, she was awarded a Kenan Fellowship at New York’s Lincoln Center Education and made the move to New York City. Since then, she has been crowned Miss Five Boroughs and won Miss New York in 2018. On September 9, 2018, she was crowned 2019 Miss America 2019; she sung “Quando m’en Vo’” from Puccini’s La Boheme in the Miss America competition and stole the judges hearts’.

In past, Nia has been a teacher, music mentor and has written over 100 songs, including one she began performing at age five, “Love, love, love, love, love is the only thing that matters to me…” Today, she resides in Brooklyn, NY.

Furthermore, she is a former Division I athlete, having competed in the heptathlon, long jump and triple jump on South Carolina’s track and field team. Additionally, she sits top ten in the record books at South Carolina for the triple jump. Cheslie runs a fashion blog, “White Collar Glam”, that focuses on workwear fashion for women. She is an active volunteer for Dress for Success and credits her achievements to her ability to learn from failure.

Theresa Burroughs, Voting Rights Activist, Dies At 89 In Alabama
Criminal for US, Justice for THEM
Comment