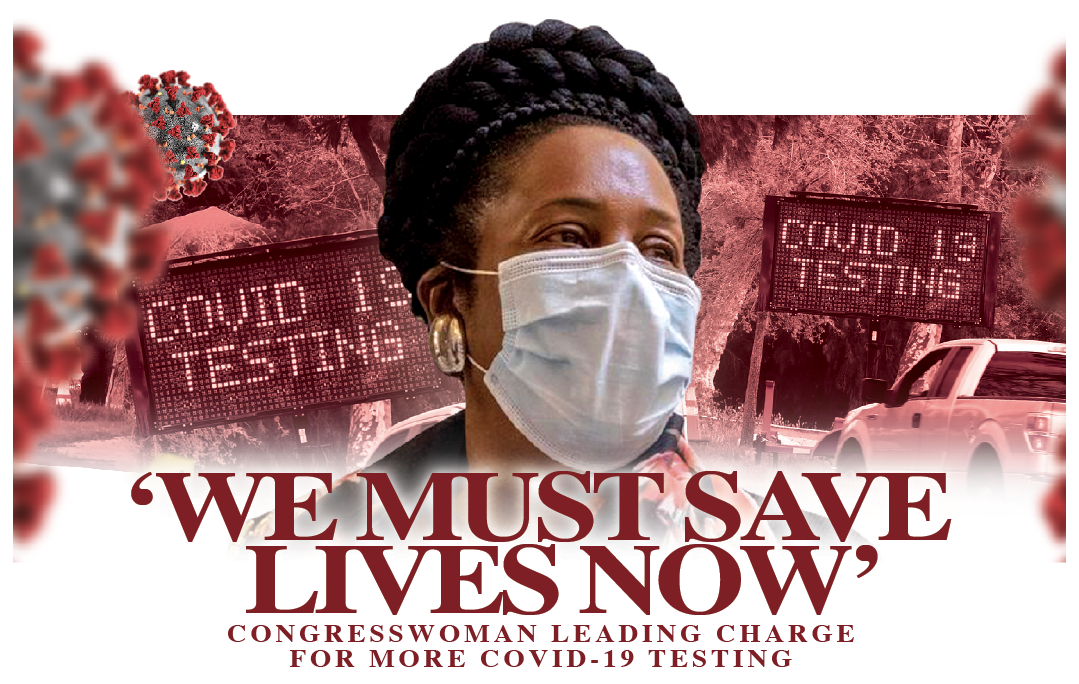 HOUSTON – Congresswoman Sheila Jackson Lee has always been a hands-on leader for the people of Houston, but these days, she can be seen front and center at community events and press conferences, leading the charge in demanding more testing in the fight against COVID-19.

It’s a personal mission, as data released shows that Black Americans are dying from the virus at disproportionately high rates.

The current number of known cases in the United States is an estimated 1.7 million and deaths are nearing 100,000. A recent study, “The Color of Coronavirus: COVID-19 Deaths by Race and Ethnicity in the U.S.,” shows that more than 20,000 Black Americans are known to have lost their lives to COVID-19 through mid-May.

With these statistics in mind, Jackson Lee is leaving no stone unturned when it comes to getting the people in her district the resources they need.

“Test kits and diagnostic testing in one of the largest and most diverse nations in the world is vital toward measuring and preventing community spread. We must save lives now! As we begin to study the next steps, employers and local governments must consider and require everyone to get tested,” Jackson Lee said.

Dr. Anthony Fauci, director of the National Institute of Allergy and Infectious Diseases, recently spoke on the topic of COVID-19 and African Americans at a White House press briefing.

“Health disparities have always existed for the African American community,” Fauci said. “Here again with the crisis, how it’s shining a bright light on how unacceptable that is because, yet again, when you have a situation like the coronavirus, they are suffering disproportionately.”

Fauci noted the health issues that are hampering African Americans.

“The diabetes, hypertension, the obesity, the asthma — those are the kinds of things that wind them up in the ICU and ultimately give them a higher death rate,” he said.

Another issue tied to health issues is lack of health coverage. Data shows 11% of Blacks are uninsured, against the national rate of 7% in 2017. Some Blacks don’t know they have these underlying issues because, with less access to health insurance, some conditions remain undiagnosed until it’s too late.

Due to the lack of resources, Jackson Lee is making sure testing is free, and available for everyone. There are more than two dozen testing sites across the area, thanks, in part, to funds from donors.

“I was driven to bring testing to Houston because COVID-19 was more contagious than any other virus we had seen in our lifetime. On March 19, we opened one of the first testing sites in the nation that required no charge and no pre-registration, in a public/private partnership with UMMC United Memorial Medical Center,” Jackson Lee said. “I was proud to bring Hyundai Motor America to the 18th Congressional District to donate $100,000 from Hyundai Hope on Wheels for COVID-19 drive-thru testing and 10,000 test kits for the City of Houston. I think it helped in finding hot spots and people who were infected.”

She is also calling for a national testing protocol to test all essential workers, and residents and staff at nursing homes. There have been over 10,000 deaths in nursing homes alone all over America. This surge in deaths accounts for about 20% of all coronavirus fatalities in the nation.

“The evidence of positive cases shows that jails are crucial sites to test and the program for compassionate release was the right direction to be taken for non-violent inmates,” Jackson Lee said.

In addition to testing, Jackson Lee has been at food drives, large and small, helping citizens in need. After personally loading up the goods in cars, the congresswoman can be seen giving a slap on the trunk signaling the driver to move forward so she can hand out meals to others.

Food drives have been held at various churches, schools, food banks, etc., in addition to a few massive food drives at NRG Stadium, which has been serving thousands of people on each day of distribution.

But Jackson Lee still drives the point home, in order to get back to our normal routines, we must work together to flatten the curve.

“It is crucial that we continue to test in Harris County and the city of Houston to stop community spread,” she said. “We must put LIVES ABOVE ECONOMY! WE MUST TEST, TEST, TEST!”