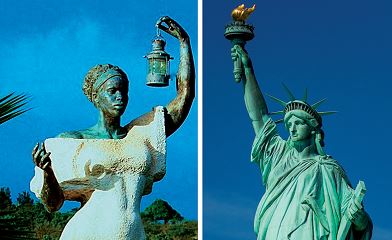 Juneteenth, also known as Freedom Day, is an American holiday celebrated on June 19, commemorating the day the Emancipation Proclamation was read to slaves in Galveston, Texas. On June 19, 1865, the Emancipation Proclamation— which had been issued on January 1, 1863— was read to enslaved African Americans by Gordon Granger, informing them of the official end of slavery in the United States. In honor of this day of FREEDOM, we want to share some thoughts about a SYMBOL OF FREEDOM of which America is known for: THE STATUE OF LIBERTY.

KNOW YOUR HISTORY: Or what one legend says is true, claiming the first “Statue of Liberty” was modeled after a black woman and had African features. In addition, the point of the statue was not to honor immigrants but rather to commemorate the abolition of slavery in America, in particular the service of black Union soldiers in the Civil War. The statue carried broken chains to symbolize emancipation.

So, as many believe, the sculpture that rises grandly from Liberty Island in New York Harbor is not the original Statue of Liberty. Conceived by French scholar and activist Édouard de Laboulaye and wrought by French sculptor Frédéric Auguste Bartholdi, the Statue of Liberty’s intention was not only to represent the admiration of the people of France for America, but to equally illustrate the changing nature of liberty, including its racial dimensions, in French history.

Some say the current white statue was substituted for the original when American politicians objected to the portrayal of Liberty as a black woman. Some have even argued that the original black statue still exists, either in France or hidden somewhere in the catacombs of New York.

FACT CHECK: THERE IS CURRENTLY NO PHOTO OF THE “ORIGINAL” STATUE OF LIBERTY… There are, however, many renditions of what some have mistaken her to be. The photo we’ve printed has been falsely circulated as the original statue. It is actually the “Lady Liberty” of Freedom Point on the Caribbean island of St. Martin, a public sculpture by Theodore Bonev that was installed in 2007. Remember, the Statue of Liberty we have today was unveiled in 1886.

According to the American Historical Association, no evidence can be found to verify this legend, but its mere existence underscores the racialized nature of America’s most famous monument.

Of all the memorials to freedom throughout the world, none is more important or more widely known than the Statue of Liberty. Towering majestically over the entrance to New York Harbor since 1886, the great statue has become, more than any other physical site, the symbol of both human freedom and American national identity. Originally a gift from France to the United States, it also represents the historical ties between the two great republics and the significance of liberty as a global phenomenon. Endlessly reproduced as a tourist object, a commercial symbol and a political icon, the Statue of Liberty is one of the great monuments of the modern world.

AHA notes there is a facet of the statue’s history, however, that has yet to be explored in depth: its role as a symbol of whiteness, and more particularly of the whiteness of freedom. Race and racism are not just central aspects of Western society; they have shaped and permeated the very idea of freedom as we understand it. Moreover, freedom has been closely entangled with ideas of whiteness and white racial identity in modern history, so that to be free has often meant to be white, and vice versa. The Statue of Liberty symbolizes this perfectly: Lady Liberty’s European physical features, most obviously, but also the lack (indeed, as we shall see, the suppression) of any markers identifying the sculpture with rebel or freed slaves, give it a strong sense of racial identity. Moreover, the symbolic role played by the monument in allowing European immigrants to the U.S. to claim white status underscores its racial character, as does its complicated but largely exclusionary or at best irrelevant relationship to African Americans and other peoples of color. The Statue of Liberty embodies both racial difference and an unparalleled representation of human liberation.

The next time you see the towering “Lady Liberty” your history books taught was meant to be a beacon of hope for immigrants, how will you now view it? Think about it. Ellis Island, the inspection station through which millions of immigrants passed, didn’t open until six years after the statue was unveiled in 1886. The plaque with the famous Emma Lazarus poem — “Give me your tired, your poor, your huddled masses yearning to breathe free” — wasn’t added until 1903.

So, was the Statue of Liberty REALLY meant to welcome those who were coming to America on their own free will as immigrants, or was it to celebrate the freedom of those who were brought here in chains?

After you decide, what will you teach your kids? — AANI