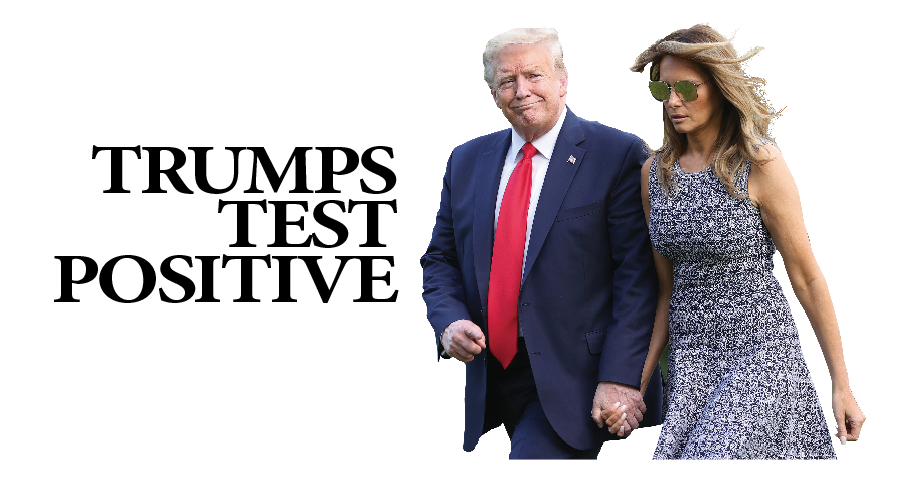 In a shocking turn of events, the world was shocked to learn news of the inevitable, President Donald Trump — who has been against wearing masks — and his wife, First Lady Melania Trump, have both tested positive for the coronavirus.

The news was released shortly after learning that one of his closest advisers, Hope Hicks, also tested positive.

Hicks, the POTUS and FLOTUS and their son-in-law Jared Kushner, had all been traveling together over the last several days. Neither was seen wearing masks as they headed to public events.

The president has mocked others who wear masks, including mocking Former Vice President Joe Biden in their first 2020 presidential debate, insinuating that Biden was weak for wearing masks that covered his entire face.

Both Biden and Second Lady Jill Biden have tested negative.

The president also insisted he was OK, tweeting, “We will get through this TOGETHER!”

The first lady wrote, “We are feeling good.”

But sources say there is a sense of panic inside the White House as they work to determine who else may have contracted the disease and whether the President — who is considered high risk for serious complications — was displaying symptoms.

The president has come under intense scrutiny, with claims of his lack of leadership in handling the pandemic and failure to protect the American public.

In an interview, Trump told veteran journalist Bob Woodward he “wanted to always play it down” against the advisement of his own health experts.

Even as some of his closest global allies, including Brazilian President Jair Bolsonaro and British Prime Minister Boris Johnson, came down with the disease, and after the COVID-related death of Herman Cain, one of Trump’s friends, he still did not take the virus seriously.

In a memo released to the public, White House physician Navy Cmdr. Dr. Sean Conley said Trump was “well,” though did not specify whether he was displaying symptoms, adding that the president and first lady “plan to remain at home within the White House during their convalescence.”