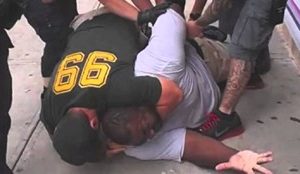 Eric Garner was selling cigarettes on the cuts because of a lack of income. Acquired Income Deficiency Syndrome is the reason that Mr. Garner became an illegitimate capitalist. As Jesse Jackson said, the only time that black people have had full employment was during slavery. Garner was a hustler, doing what he determined to be necessary to support his family. He needed a meaningful living wage job, not a contact with fear-obsessed policemen.

Millions of black people and marginalized citizens have unnecessary contact with law enforcement because of low level- petty offenses that barely rise to the level of a misdemeanor. If you take a squeegee and hustle by cleaning windshields at the corner of Shepherd and Kirby, you will be tagged by the police. This is the entrance way to one of the richest communities in the country – River Oaks.

Freddie Gray, wo was unarmed and killed by police officers in Baltimore, is alleged to have been involved with drugs. He is not alive to defend his reputation, but we do know that drugs are an employing industry, it puts people to work.

Part I of this article speaks to the fact that there is something wrong when one person, Billionaire Bill Gates of Microsoft, has more income that 40 million black people. This includes Oprah Winfrey and Michael Jordan, plus LeBron James. Dr. Martin Luther King Jr. spoke of the need to solve the puzzle of surplus wealth and abject poverty in this land of plenty.

Part I of this article speaks to the need to minimize contact between law enforcement and citizens. Law enforcement has broken the trust and legitimacy set up by their pact with citizens. They do not have humility and grace, and thus are unable to apologize for their abusive and deadly behavior.

The next part of this article speaks to the criminalization of black and marginalized men. Often, we think of police as the core of the problem of mass incarceration. Chris Hayes of MSNBC pulverizes the ball when he argues that the number of people becoming part of the system through arrests and prosecutions is to be blamed on prosecutors and not just cops.

Prosecutors like Harris County DA Kim Ogg have tremendous discretion on whether to slap the wrist of activate the electronic sliding doors of jail.

It is an interlocking system with no unifying center. Many of the law enforcement personnel are psychopaths, incapable of guilt, obsessed by fear and devoted to themselves and their union, not the public. However, most officers are interested in the public good.

Stopping me for foolishness? IT SHOULD STOP TODAY!