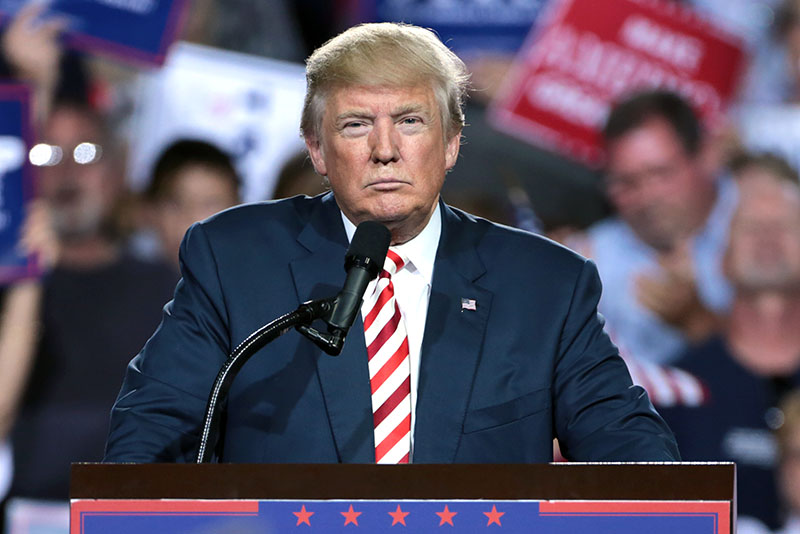 Just when we thought that President Donald Trump couldn’t go further off the deep end with his bizarre statements, he — like the Energizer Bunny — just keeps going and going and going.

Let’s take the top three statements that flew out of his mouth over the last couple of weeks.

Trump, in an interview with “Axios on HBO,” refused to give praise to late Congressman John Lewis, rather focusing on the fact that the civil rights icon decided not to attend his inauguration and State of the Union speeches.

Interviewer Jonathan Swan led Trump through a wide range of topics, including the increasing number of coronavirus cases after Trump’s maskless rally in Tulsa, Okla., the now controversial mail-in voting, and his opinion of Lewis, who just lost his battle with cancer.

“John Lewis is lying in state at the U.S. Capitol. How do you think history will remember John Lewis?” Swan asked Trump.

Lewis was arrested more than 40 times while protesting, was beaten on the Edmund Pettus Bridge on “Bloody Sunday” of the Selma-Montgomery marches and was the youngest speaker at the 1963 March on Washington — where Martin Luther King Jr. delivered his “I Have a Dream” speech.

Swan asked Trump whether he thinks Lewis and his story are “impressive,” to which the president downplayed, again, focusing on Lewis’ missed attendance at the inauguration.

“I can’t say one way or the other. I find a lot of people impressive. I find many people not impressive,” Trump said. “He didn’t come to my inauguration. He didn’t come to my State of the Union speeches. And that’s OK. That’s his right, and, again, nobody has done more for Black Americans than I have. He should have come. I think he made a big mistake.”

SAY WHAT??? AND THAT BRINGS US TO NUMBER TWO

“I did more for the Black community than anybody with the possible exception of Abraham Lincoln,” Trump told Swan.

“You believe you did more than Lyndon Johnson, who passed the Civil Rights Act?” Swan asked.

Seriously, do we need to comment on this? Some things shouldn’t be dignified with a response. Carry on!

Trump publicly insulted the good doctor who has stood by his side as he’s made the most questionable statements regarding the coronavirus.

Dr. Deborah L. Birx, 64, is the current response coordinator for the White House Coronavirus Task Force. She is a world-renowned global health official and a retired U.S. Army physician who was instrumental in HIV/AIDS vaccine research. Her career has spanned three decades, and now she holds her tongue at press briefings as Trump suggests bringing light “inside the body” or the possibility of an “injection” of disinfectant into a person infected with the coronavirus as a deterrent. It should be noted that the maker of Lysol issued a statement warning against any internal use of the cleaning product.

When Birx was interviewed by CNN’s Dana Bash last week, she gave warnings about the pandemic, in opposition to some of the things the president says.

“What we are seeing today is different from March and April. It is extraordinarily widespread. It’s into the rural as equal urban areas,” Birx said, adding that people in multi-generational families should start wearing masks inside their homes.

“So Crazy Nancy Pelosi said horrible things about Dr. Deborah Birx, going after her because she was too positive on the very good job we are doing on combatting the China Virus, including Vaccines & Therapeutics. In order to counter Nancy, Deborah took the bait & hit us. Pathetic!” Trump tweeted.

Not a nice thing to say…but then again…nothing surprises us with this president.