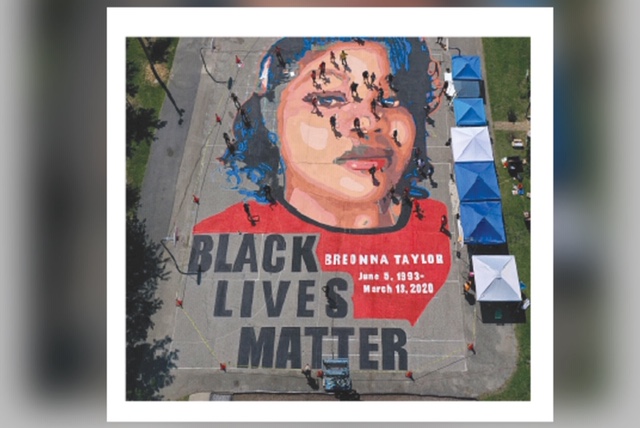 His question is the same as many others after Kentucky Attorney General Daniel Cameron announced this week that two officers were justified in the Breonna Taylor shooting, and only one — former Louisville police officer Brett Hankison –would be charged with “first degree wanton endangerment,” but not for Taylor’s death.

And many of us are left to wonder… what is wanton endangerment?

A person is guilty of wanton endangerment in the first degree when, under circumstances manifesting extreme indifference to the value of human life, he wantonly engages in conduct which creates a substantial danger of death or serious physical injury to another person.

Hankison is accused of allegedly firing blindly through a door and window in Taylor’s building, which officials say, could have possibly harmed others. The former’s detective’s bond was set at $15,000.

The other two officers — Sgt. John Mattingly and Det. Myles Cosgrove — were not charged. Cameron told reporters that the officers were “justified in their use of force” because Taylor’s boyfriend fired at officers first.

The Taylor family attorney called the decision “outrageous and offensive.”

“The decision before my office is not to decide if the loss of Breonna Taylor’s life was a tragedy, the answer to that question is unequivocally yes,” Cameron said.

Cameron said this is “a gut-wrenching emotional case” where “the pain is understandable.” He stressed the need for the public to remain peaceful – respecting protests, but not violence.

The NAACP said in a statement that the justice system “failed” Taylor and the charges against one officer do “not go far enough.”

On March 13, Taylor was at her apartment with her boyfriend when officers broke down her door while executing a late-night “no-knock” warrant in a narcotics investigation. The 26-year-old EMT and aspiring nurse was shot five times and died. No drugs were found at Taylor’s home, as police mistakenly suspected.

Shortly after Cameron’s announcement, Louisville Mayor Greg Fischer and Louisville Interim Police Chief Robert Schroeder announced a 72-hour countywide curfew starting 9 p.m., government buildings were to be closed, and the Kentucky National Guard was activated in anticipation of the protests.

Cameron, the first Black person to hold the post and a Republican rising star, was made a special prosecutor in the case in May, and the FBI opened an investigation as well. Demonstrators are now calling for him to step down from his position.

On Sept. 15, the city of Louisville announced a historic $12 million settlement of the family’s wrongful death lawsuit. The city also agreed to enact police reforms which include using social workers to provide support on certain police runs and requiring commanders to review and approve search warrants before seeking judicial approval.

Protesters say neither the money nor the charge against Hankison is enough. Will justice for Blacks ever be served? — AANI