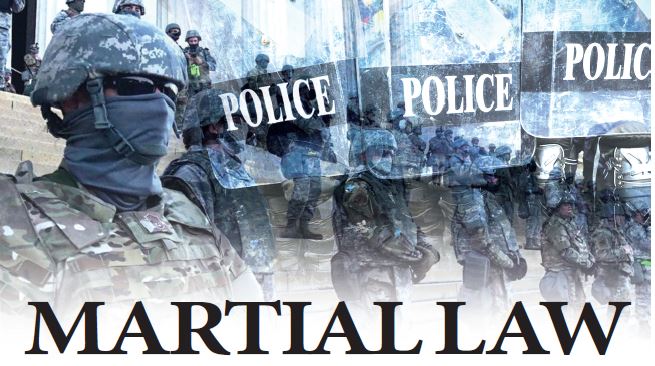 HOUSTON — When a leader demands “law and order” it is usually in a plea to reduce crime, get drugs and guns off the streets or increase police patrol in areas of need. It is NOT in the way that President Donald Trump has demanded it these days, with military force used against protesters in several incidents dancing disturbingly close to martial law.

America is in an uproar after the brutal murder of George Floyd, who was killed by Minneapolis police in front of onlookers in March. Since then, protesters from all walks of life have taken to the streets in the name of social justice, calling for an end to modern-day racism (if there really is a difference between then and now).

Some feel that what doesn’t help matters is the fact that President Trump, instead of calling for calm and uniting the people, has used the civil unrest to flex his political muscle and use racist and bulldoggish tactics to keep America divided by race, class and party affiliations.

It’s Blacks vs. Whites. Democrats vs. Republicans, and now, police and the MILITARY vs. THE PEOPLE?

President Trump has been unapologetic about using what some feel is excessive force for his own agenda, no matter how small.

For starters, the president allowed “military looking personnel” to tear gas protesters at Lafayette Park across from the White House just so he could take a photo in front of a cathedral. A staged photo-op, we might add, complete with a Bible in his hand.

Another scare tactic used has been flying military helicopters low over protesters.

And most disturbingly, was during one of the recent demonstrations in Portland, Oregon where protesters were snatched off the streets and thrown into the back of unmarked vehicles by “agents” in military gear who did not announce who they were.

The president seems to think so and offered the following response to the use of force in various cities.

“They’ve been run very poorly, these cities, whether it is in Seattle, where we were getting ready to go in. In Minneapolis, where we had the National Guard go in and, as soon as they did that, we straightened that mess out. They should have been able to do it locally with their police. Their police are good, but they were told not to do anything,” Trump said. “Portland was very tough and they called us in, and we did a good job, to put it mildly. Many people are in jail right now, but we have other cities that are out of control, they are like war zones. I don’t say this for political reasons, they are all Democrats. They are liberal, left wing Democrats and it’s almost like they think this is going to be this way forever, like in Chicago. We’re not going to put up with that.”

“People are being literally scooped off the street into unmarked vans, rental cars,” Wheeler told CNN. “Apparently, they are being denied probable cause, and they’re denied due process. They don’t even know who’s pulling them into the vans.”

Does this resemble anything we’ve seen before? Not many in the millennial generation are familiar with what’s been happening, but those who have been longtime fighters for civil rights know exactly what it is.

What is martial law?

In its simplest form, martial law is a law administered by the military rather than a civilian government and may be declared in an emergency or response to a crisis, or to control occupied territory.

Typically, the imposition of martial law accompanies curfews; the suspension of civil law, civil rights, and habeas corpus; and the application or extension of military law or military justice to civilians. Civilians defying martial law may be subjected to military tribunal (court-martial).

“I am your president of law and order. I have strongly recommended to every governor to deploy the National Guard in sufficient numbers so that we dominate the streets. If a city or state refuses to take the actions that are necessary to defend the life and property of their residents, then I will deploy the state’s military and quickly solve the problem for them,” the president said during a press conference.

The Posse Comitatus Act is a United States federal law (18 U.S.C. § 1385, original at 20 Stat. 152) signed on June 18, 1878 by President Rutherford B. Hayes, which prohibits the government from using military forces to act as a police force within U.S. borders.

To be clear, governors can ask that the federal government send active duty troops to help in cases of civil unrest, but no governors requested that help, instead relying on their local law enforcement.

So, did the president overstep his bounds? Short answer …. YES!

It appears the Trump Administration has authoritarian aspirations and would prefer a dictatorship over democracy.

Journalists are being arrested during live broadcasts, ICE is still on the hunt and police are still killing and beating people of color with no consequences.

Trump defends his actions, saying the nation has been gripped by professional anarchists, violent mob arsonists, looters, criminals, rioters, and thugs. But the people Trump is referring to do not deem themselves as such…they feel they are change agents fighting for the greater good.

As always, we attempt to educate the reader, then leave you to your own interpretations. Do you understand…or OVERstand?