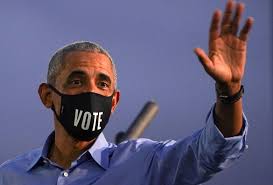 The strength of a candidate, sometimes, depends on the strength behind their endorsements, and one of America’s, arguably, most beloved presidents – Barack Obama – has decided to step out from the sidelines to make the most powerful endorsement in this election.

President Obama this week began to stomp the trail on behalf of his former vice president, Joe Biden, in an effort to get Donald Trump out of office.

Former first lady Michelle Obama is a powerful speaker, and has already been campaigning for Biden with her “it is what it is” messaging, but the country has been waiting for her husband to take his place center stage.

Many have wondered why it has taken so long for Obama to come out and endorse the many Democratic candidates who need him, but David Axelrod, a longtime adviser to Obama, explains it is strategic.

“In terms of his value, it’s been smart not to overuse him,” Axelrod said. “They’ve been using him in targeted digital appeals to constituencies that Democrats need to arouse in this election: young people and people of color, who did not come out in the numbers that Hillary Clinton had hoped four years ago.”

Obama stayed almost entirely out of the Democratic primary battle, and even after Biden won the nomination, he remained careful in the way he went after Trump, respecting a long-standing practice of former presidents being overly critical of their successors.

Trump, however, shows Obama no respect. At his rallies, Trump continues to vilify Obama and his administration, repeating unfounded accusations about spying on his campaign four years ago, repeatedly calling for Obama to be indicted, and no one can ever forget Trump’s “birther conspiracy” against Obama.

Well now, with just two short weeks to go, the gloves are off!

Obama has been steadily making it known exactly how he feels about the current president.

At the funeral of civil rights icon Rep. John Lewis, he delivered a powerful speech that was, directly comparing Trump to racist leaders from the past.

“George Wallace may be gone, but we can witness our federal government sending agents to use tear gas and batons against peaceful demonstrators,” he said.

And in his Democratic National Convention address, Obama remarked on Trump’s inability to lead and take his role seriously.

“Donald Trump hasn’t grown into the job because he can’t,” Obama said. “And the consequences of that failure are severe.”

He stresses that Biden is the person who can bring this country together.

“I trust him to be a great president,” Obama said in a video released Tuesday on Twitter. “He’s different. He’s on the right side of the issues. He’ll get the job done.”

Obama is appearing in four separate television ads for candidates in Maine and Michigan, South Carolina and Georgia, with other contests likely to be added. The hope is that Democrats can win control of the Senate.

“Make sure if Joe Biden wins, he’ll have a Senate ready to work with them to move our country forward,” Obama said.

As the younger generation says — “it’s on.”

Obama is speaking out, Biden is on the move and the November 3 election is right around the corner.