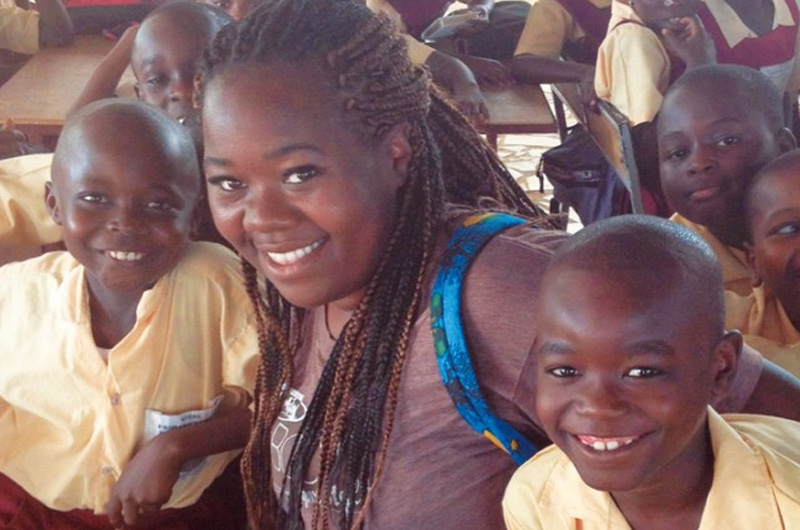 Jabang, The Gambia – For Eboni Rose Price, the thought of going to Africa was an dream opportunity for her to get some real career development experience, but what she discovered in Gambia was her true connection to the past.

It became a life changing lesson in Black history, heritage and culture in a country where the rough hard journey to America began for so many in the chains of slavery.

“I really did not know what to expect at first,” the Acres Home native said. “It was an experience that not only changed my life, but also about the way I think about things.”

She was influenced by her Nigerian instructor who told her that the experience would change her life.

Price said life in Gambia is a far cry from the conveniences taken from granted in the United States.

She said the trip broadened her world view and gave her a better understanding of the world and the history of Black Americans (as we are referred to in Gambia).

“I chose animal science because I wanted to do a job I loved,” she said. “I also love working with and helping people.”

She was part of a group of a dozen students who made the pilgrimage to The Gambia as part of the Langston University Student Abroad Program 2014.

Going to Gambia gave Price also got her a opportunity to help others and learn more about animal science studies while doing an internship at Uncle Tee’s Poultry Farm in Jabang. Uncle Tee’s is the largest poultry farm in the country. The broiler farm in equipped with the latest in genetic and computer technology and provides great opportunities for local Gambians to make a living.

While there, she got first hand knowledge of raising chickens and chicken and egg care and processing.

One of the most revealing things about the trip that far outweighed the opportunity was the removal of stereotypes about Africa and African people.

“I came to a better understanding of African and its people,” she said. “One of the most important things is the fact that we have been lied to about Africa. We came to find out the truth and what we know now will last a lifetime.”

The Republic of the Gambia commonly referred to as The Gambia or Gambia is situated in the western region of Africa. It has a land area of 10,380 km2 with an estimated population of 1,700,000 people. The agriculturally fertile country, dominated by farming, fishing, and tourism has its capital in Banjul.

The official language is English and National languages include Mandinka, Wolof, Fula, Serer, and Jola.

The raining season is short, from June to October, with most of the precipitation falling at night. The climate is dry and warm from December through February, the peak of the tourist season.

Tourism in The Gambia has become the fastest-growing sector of the economy as visitors come in every year, drawn by its beaches, birds, sunshine, the culture and the country’s biggest asset: the Gambian people, whose hospitality and friendliness have made it “The Smiling Coast.

Gambia remains one of Africa’s smallest countries and unlike many of its West African neighbors it has enjoyed long spells of stability since independence since President Yahya Jammeh seized power in a bloodless coup in 1994.

The Gambia River, which runs through tåhe middle of the country, only one-sixth of the land is arable and poor soil quality has led to the predominance of one crop – peanuts.

Most visitors are drawn by the link to history of Black history or to the many resorts that occupy a stretch of the Atlantic coast. The Gambia’s little known continuation is steeped in this true story of survival, love of country, people and freedom immersed in strong linkages of tradition

Tourism is important in The Gambia. The government’s policy is to promote tourism and its contribution to economic growth.

Price learned that Africans are not uneducated hostile “savages’ running around in the bush or a barefoot people with spears chasing lions as depicted in so many American television shows and movies.

Her greatest appreciation for the struggle of Black people started with visits to ground zero heart of the slave traders – Goree Island.

The island is a small 45-acre island located off the coast of Senegal and was developed as a center of the expanding European slave trade.

The first record of slave trading there dates back to 1536 and was conducted by Portuguese, the first Europeans to set foot on the Island in 1444. The house of slaves was built in 1776. Built by the Dutch, it is the last slave house still standing in Goree and now serves as a museum. The island is considered as a memorial to the Black Diaspora.

An estimated 20 million Africans passed through the Island between the mid-1500s and the mid-1800s. During the African slave trade, Goree Island was a slave-holding warehouse, an absolute center for the trade in African men, women and children. Millions of West Africans were taken against their will. These Africans were brought to Goree Island, sold into slavery, and held in the holding warehouse on the island until they were shipped across the Atlantic Ocean. They were sold in South America, the Caribbean, and North America to create a new world. The living conditions of the slaves were atrocious on Goree Island.

“Seeing it made me cry because I could sense and feel the pain of the ancestors,” she said. “This is real and seeing it helps you appreciate Black history more and the powerful effect of what so many of our ancestors went through.”

Price even sat in one of the small holding cell areas where Blacks were kept and walked through the long tunnel where many Blacks were taken into slavery never to return to Mother Africa.

Another eye opening experience was meeting and visiting with citizens of Gambia who seemed to have a deep spiritual connection to Black Americans.

She noted her volunteer work with school children and visits with Gambian families who not only shared generations old African stories, but also gave her a visual peek into past and present tribal traditions.

“Family and community ties are strong there,” Price said. “I really enjoyed the people making it feel like home and sharing a part of them that is very much part of us as a people.”

She talked about having to answer a multitude of questions about life in America.

“They want to know about us and life in America,” she said. “The young people want to learn. Education is very important to them.”

Another important pilgrimage she made was to the Gambia West Africa ancestral village of Kunta Kinteh.

Kunta Kinteh was the slave depicted in the renowned book and movie “Roots”, by Alex Haley.

The village of Juffureh was Alex Haley’s ancestral home and has descendants of the Kinteh family.

“It was special to get to go there,” she said. “While there I did meet the eighth generation relatives of Kunta Kinteh.”

Juffureh tracks almost five generations across the mighty Atlantic Ocean to the USA, and back, and its culture is still seen today. Although slavery has long been abolished, the ancestors and direct descendants of the hero and of many other extracted Africans in the Diaspora can be found today. Kunta Kinteh’s trail can still be followed from his birthplace in rural Gambia.

She also visited the nearby village of Albreda, the site of the old French Trading Post.

One of the hopes of the villagers is that when one leaves with greater understanding from the village, it plants new African Seeds for the future and that those seeds bring forth the tree of ancestral life.

Price plans to continue her education but with a new commitment and energy as she understands the connection to her past and that link helps her appreciate why her education is not just for her, but … make a statement from the past that what she accomplishes in life is a tribute to ancestors she now knows and  understands.

Price has always had a philosophy driving her that included keeping God first and family second.

Now, her one experience alone has given her a lifetime of memories and historical and cultural connections and she said she will do her part to plant seeds, share history and tell the story of the ancestors.