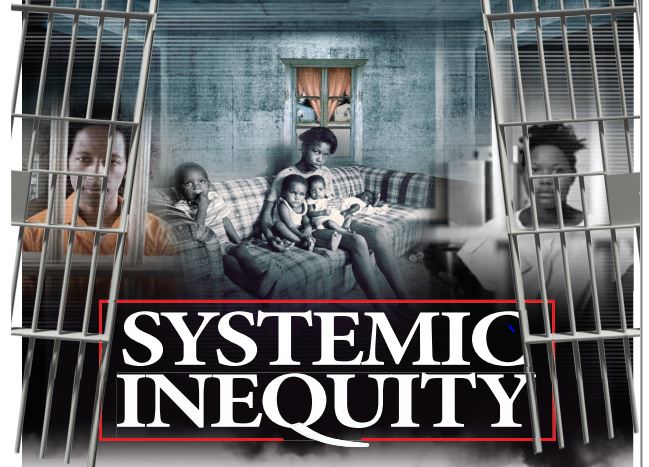 To you, she may look like a WELFARE MOTHER, too young, with too many kids and living off the system. But to us, she looks like a YOUNG BLACK WOMAN shielding the ones she loves and who love her back. Her babies have already been born with two strikes against them, just because they were born BLACK and POOR. How are they going to make it, when there is a dark cloud of racism already hovering above them, waiting for them to make one false move before they chain gang them on that infamous prison pipeline?

Whether we call it “Systemic Inequity” or “Systemic Inequality,” it’s all been going on for far too long. Did you know there is a difference between the two? Inequity means injustice or unfairness, while inequality doesn’t necessarily imply an injustice, simply an imbalance.

They’ve been finding a way to hold us back, even more so after releasing us from the chains of slavery. Every move we make that’s on the “up,” they TRY to find a way to knock us back down.

From the historical poll taxes that disenfranchised African American voters; to poor treatment of Black soldiers who returned home after fighting in World War I and World War II, Jim Crow and segregation in schools, Blacks have had to fight every step of the way. And today, they are killing us in plain sight, for the world to see. Dead or in jail is where they want us. But where do you see yourselves? Think about it.

So let’s just get rid of all the fancy words — inequity, inequality, disparities, etc. and just call it what it is. FLAT OUT RACISM!!!

Like the popular saying goes today, it is what it is… so what are you going to do about it? NOTHING — UNLESS YOU EDUCATE YOURSELF ON WHAT’S SPELLED OUT IN BLACK AND WHITE FOR YOU.

My brothers and sisters, a target has been on your back since the day you fought your way out of your mother’s womb. And just like you instinctively did then, you must instinctively fight to remain out of the belly of the beast.

It’s a simple look at facts and figures.

Just think about the prison population alone when it comes to racial disparities, the graphs and data provided by PrisonPolicy.org shows that our criminal justice system is defined by stark differences at every stage.

It makes your jaws drop just to see the statistics.

And, of course, it doesn’t end with prisons. The World Economic Forum posted a series of charts illustrating other key racial inequality gaps among Blacks in the U. S.

In the 70 years since the US Supreme Court ruled racial segregation of public schools unconstitutional, progress in improving racial educational divides has been slow and uneven. Gaps have narrowed by 30-40% when compared to the 1970s, but divides remain large.

For people of color in America, education does not provide the same economic return as it might for other groups. People of color, particularly women of color, typically have lower salaries than white and male workers with similar levels of education.

A lack of access to higher education or skilled work can make people of color more vulnerable to unemployment during downturns and periods of economic growth. As researchers explained in one report from The Russell Sage Foundation and The Stanford Center on Poverty and Inequality: “An African American cannot count on education as providing the same relief against the risk of unemployment that it provides to other groups.”

Life expectancy gaps between white Americans and people of color have begun to narrow, but inequities still exist thanks to a range of socio-economic factors such as income inequality, access to health insurance and adequate health care.

The disproportionate impact that COVID-19 has had on black Americans demonstrates some of the vulnerabilities the population faces.

The more you know, the more you can and will look out for and take steps to protect yourself. Work hard to close the generational gaps in your family, and let’s beat racism out of OUR neighborhoods.